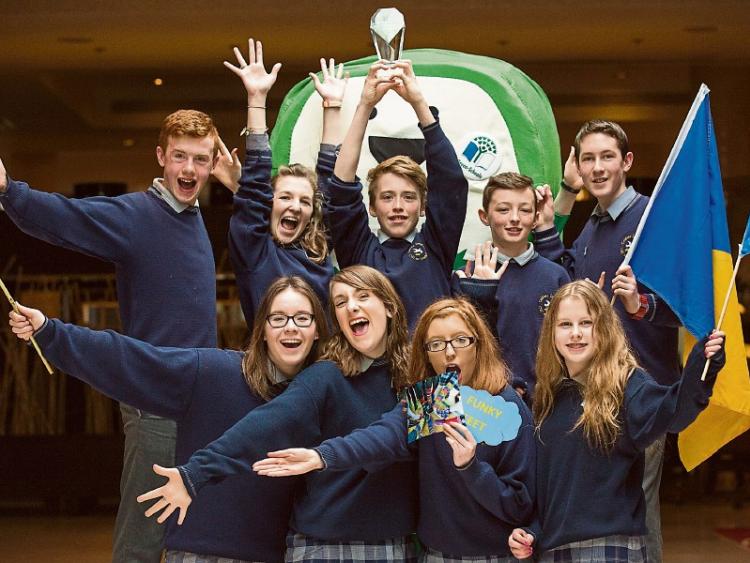 The ever active Coláiste Iosagáin Portarlington, now gearing up for their annual 5k street run, has won the national title of An Taisce's 'Travel School of the Year'.

The school was awarded the prestigious Green-Schools title at a ceremony in Dublin's Radisson hotel.

“It was fantastic. 1800 schools took part in the challenge so to be picked out was an honour,” said teacher Carol Browne, Green Schools co-ordinator along with teacher Brigid Gilligan.

Last February the school took on the Green-Schools 'Big Travel Challenge', opting to focus on walking to school.

They began with 93 students doing the challenge, and ending with an outstanding 554 arriving on foot, more than half the student population.

The fortnight culminated in 'Funky Friday Feet Day' when students and teachers wore crazy colours and walked or ran a total of 113km to school.

“It was a 'feel-good' day, it got everyone involved,” said PE teacher Miriam Holland.

“These schools showed that a lot can change in a fortnight. They’ve shown that engagement within the school community and outside the school gates, is one of the keys to real and lasting behaviour change. Well done to Coláiste Íosagáin,” she said.

The challenge is just one part of Coláiste Iosagáin's active policy.

The 5k run through Port's streets on May 20 is now in it's fifth year, begun by the PE dept to tackle what they noticed was a high level of student inactivity, with most students driven to school.

This year 700 students and teachers are expected to take part. They will run in orange t-shirts for Cycle Against Suicide, as the school is an official ambassador for the national cycle, which highlights suicide and depression supports.

The chip-timed run is as much about taking part as winning.

“What is most important to the PE dept is getting people out running who never ran before, so we have prizes for most improved too,” said Ms Holland.

It is a community wide event.

“Oakdale Nursing Home beside us are again sponsoring trophies, the local people come out and cheer and hand out water, and the parents council, students and staff all help out, everyone looks forward to it,” said Ms Holland, a co-organiser with teacher Sinead Dempsey.