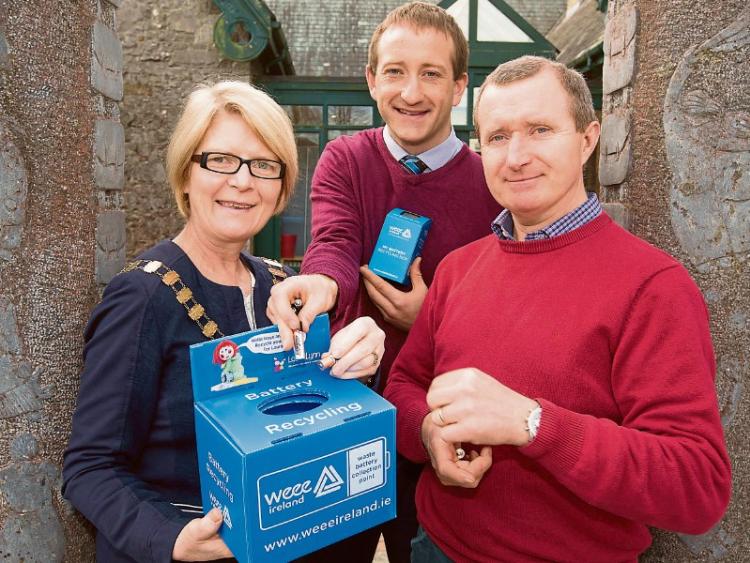 Abbeyleix Tidy Towns is calling on all in the community to help in the first ever battery recycling drive.

They want to encourage the local community and businesses to participate in gathering up their waste batteries and take them to various collection points around the community. Everyone has old batteries lying in the bottom of kitchen drawers or lurking in sheds and now is the opportunity to dispose of them safely as batteries should never be put in household waste or disposed of in landfills.

Abbeyleix has been chosen as the locality for the national pilot of the first ever community battery recycling drive and, if successful, this initiative will be rolled out by WEEE Ireland to all Tidy Town groups nationally. WEEE Ireland are delighted to partner with Abbeyleix Tidy Towns and Laois County Council for this launch and their logistics manager, Conor Leonard, gave some background to the first initiative of its kind. “The project is focused on encouraging all areas of the community and local business to participate in rounding up and recycling used batteries. 2016 is a very important year...as Ireland strives to reach EU targets for battery recycling which equates to almost one out of every two batteries that must be recycled”.

Chairperson of Abbeyleix Tidy Towns, John Joe Fennelly, added that “one of the goals of the project is to raise awareness of battery recycling and how important it is to dispose of them correctly”. Another key objective is to reduce the carbon footprint, traffic and noise pollution by minimising the number of collections that have to be made. Abbeyleix Tidy Towns take a proactive and positive approach when it comes to sustainable waste and resource management and work with many local dedicated partners on this including Supervalu, Clelands, Abbeyleix Library, Dove House as well as Heritage House and local schools.

To mark this exciting opportunity a day of events was planned for the launch in Abbeyleix on Thursday April 21. This began in Scoil Mhuire where a 'smoothie' bike was operated by the pupils who cycled it to illustrate human energy power to make their own smoothies. Then on to Heritage House where the 'What's a Watt' interactive talk was given. This was attended by pupils from the South School and Scoil Mhuire and a group from Dove House. Pedal power was used to illustrate real time energy and the audience was transfixed by demonstrations of how much energy is required to power light bulbs and games consoles for example. Most left with a new understanding of how important it is to turn things off when not in use and why parents give out when the lights are left on in an empty room, again! The final event was a 'climate for change' talk in Abbeyleix Library.

Battery collection boxes can be left at the various collection points. Eveery battery recycled goes towards a donation to the Laura Lynn Children's Hospice which WEEE Ireland has been supporting for the last number of years. With your help Abbeyleix can make a differance