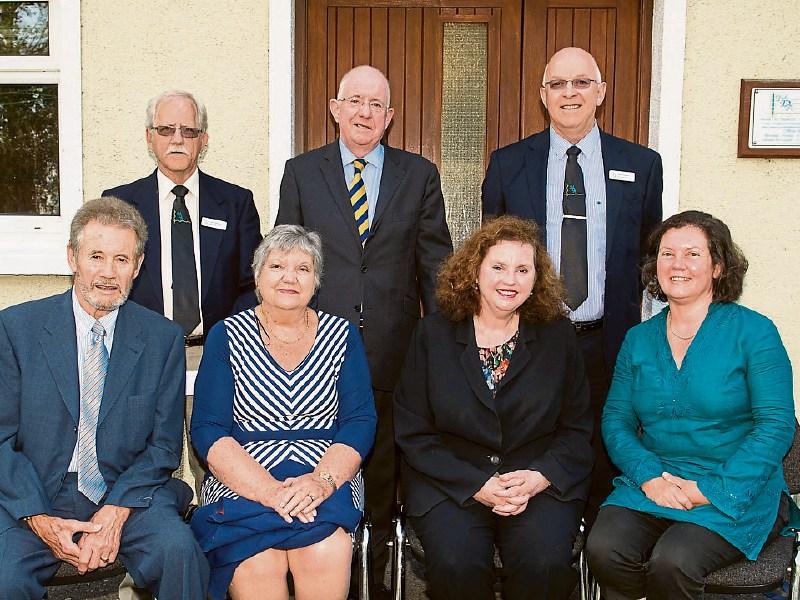 A piece of 211-year old stitched artwork that recently returned to Mountmellick from Australia, is bringing tourism to the town.

On June 7 the rare sampler, depicting a map of Europe, was unveiled in its new home in Mountmellick Museum, by the Australian Ambassador Dr Ruth Adler.

Also present was Minister for Foreign Affairs Charlie Flanagan, and the Davis family from Wexford, whose ancestor gave it to the Beale family from Mountmellick, as they left for Australia in 1852.

The sampler is now on permanent display. Curator Dolores Dempsey has seen a surge in visitors to the museum, which also displays Mountmellick embroidery and has a genealogy database of Quaker family records.

“We have had a very positive reaction. Just yesterday we had four groups visiting to see it, from Dublin, Limerick and also Portlaoise,” she said.

The rare Sampler was donated by Bronwyn Mutton of Western Australia.

She is a descendant of Hannah Davis who made it in 1805 and in 1852 gifted it to her niece Margaret Beale, wife of Joseph Beale, as they emigrated to Australia, having lost their business by helping famine victims.

The sampler lay wrapped and forgotten until Bronwyn found it while sorting out her late fathers papers.

“She contacted us in 2013 to see if we were interested in acquiring it. She then contacted all her relatives to see if they agreed that it return to Mountmellick,” said Dolores.

In 2014 MDA Director, Marie Walsh while on a family holiday in Perth, met Bronwyn and accepted the Sampler from her.

Back in Ireland, it was carefully restored by Rachel Phelan in 2015, a textile conservationist, grant aided by the Heritage Council.

“It it a very valuable and treasured acquisition. We will ensure that it will survive by being appropriately stored, exhibited and preserved for future generations to view,” said Dolores

A second Sampler is also restored and on display, donated by Mountmellick Community School.

It is of a Map of England worked by a Deborah Manly, Mountmellick Boarding School in 1899.

At the launch, Minister Flanagan recalled his father Oliver J telling him of Mountmellick's title as 'the Manchester of Ireland”.

“Much of what made Mountmellick different was its strong presence of Quakers with their flair for entrepreneurship and creativity and commitment to philanthropy and social justice. These values continue to inspire,” he said.