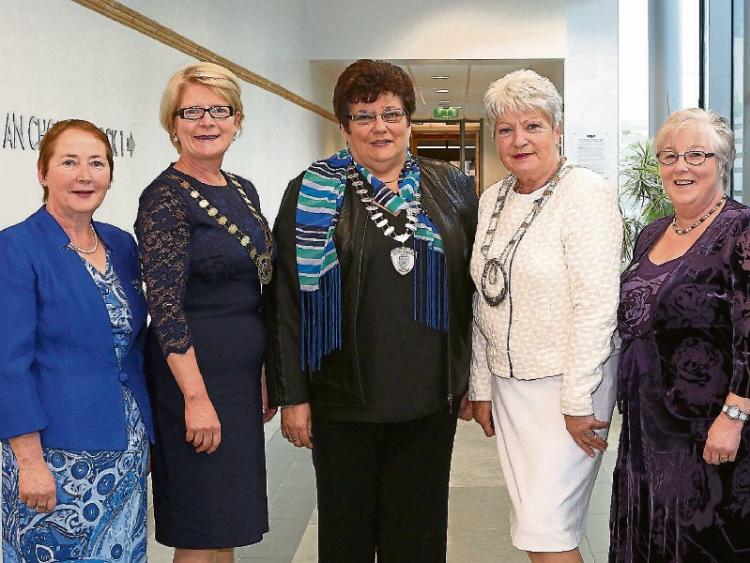 The Irish Countrywomen’s Association was the centre of attention in county hall recently when it was honoured by Laois County Council.

The Council’s outgoing Cathaoirleach Cllr Catherine Fitzgerald hosted the reception on Thursday, June 23 held to honour the contribution of the Association to life in Laois over many years. The event also took place as part of the ICA’s celebration of the 1916 rising.

On the night Cllr Fitzgerald accepted a piece of Mountmellick Lace which the ICA presented to the Council as part of its commemoration of 1916.

In turn, Laois County Council presented the ICA with a certificate and silver salver in recognition of Laois ICA’s contribution to the community.

The lace, which was made by Lucy Conroy and involved many hours of intricate work, will be hung in the foyer of Laois County Council.

It is business as usual for the federation. The Laois Brown Breadmaking competition was held recently. Maureen Dobbin, Secretary of Clough ICA guild won the heat of the National Brown Bread competition from 17 entries at the recent Laois ICA Federation meeting.

Maureen will represent Laois at the regional finals in An Grianan on August 4, where 8 winners will be selected to contest the national finals at the Ploughing Championships in Tullamore.

Meanwhile, the Portlaoise Guild’s last meeting before the Summer took place on June 1 in the Sue Ryder Home. The President presented Kristina Riauke with a pottery bowl that Kristina won for coming 3rd in a National ICA Craft Competition for Egg cosies - there were 67 entries so 3rd place was a great result.

Kristina was also presented with her prize for her 1st place in the guild’s craft competition. Margaret Redmond was second, with Anne Payne in third. The night also featured bingo and a supper.

Arles ICA Guild had an event of great interest to members and friends in Arles Community Hall. It was called Colour Me Beautiful particularly suited to those women who are confused by colour or can’t decide what to wear. It was presented by Louise Marlow and Liz Jeffers from Athy.