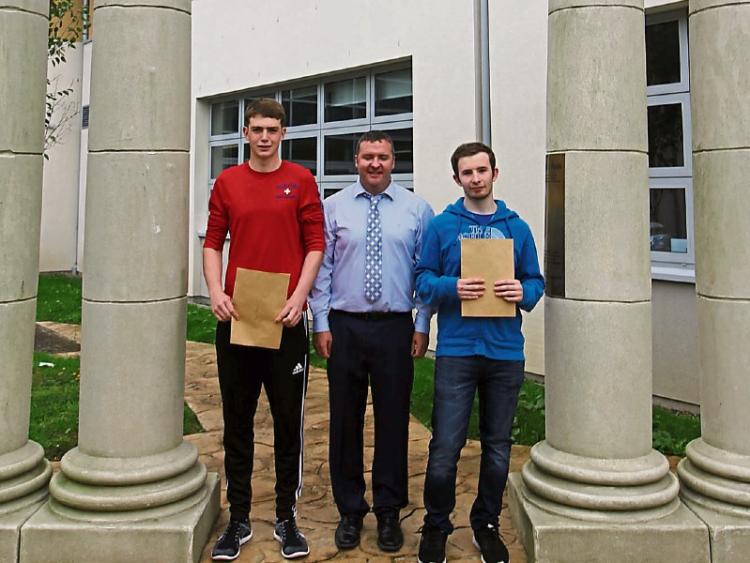 Despite a few signs of nerves just before the brown envelopes were handed out at 10am last Wednesday, it was mostly delighted young men who emerged from the doors of St Mary's CBS in Portlaoise brandishing their leaving cert results.

Top marks of 625 was achieved by one of the school’s students, Frank Flanagan of Portlaoise, with fellow Portlaoise native, Evan Bracken getting an equally impressive 615.

“I expected to do well, but not this well. I’m over the moon,” Frank said, admitting that he had worked hard to achieve such a remarkable score.

The unassuming - if unmissable at a height of over six and a half foot - young Portlaoise man sat eight subjects and scored nearly all As, bar a B3 in English, and now intends going on to study mathematical sciences at UL.

“Frank had an A to spare,” beamed deputy principal, Brian Thompson, referring to Frank’s A2 in Irish.

It was clear that Frank was just as dedicated to his extracurricular activities, as he told the Leinster Express that he wasn’t sure whether he’d be able to celebrate his achievements last Wednesday as he had a match to play at the weekend with the Portlaoise senior hurling team.

The equally modest Evan Bracken said he was “happy enough” with his total of 615.

His best subject was an A1 in maths, and he now intends going on to study engineering at UCD.

Sean Curtin, Portlaoise, said: “I did really well, I thought I was going to fail French but I passed it, that means I can go to NUIG now. My first choice is computer science, after that science.”

Pierce McCabe, Portlaoise, said he had done “great” in the exams.

“I got my full courses and I got 365, I’m delighted with that,” he said, explaining that he was hoping to go to Carlow IT or GMIT.

William Troy, Ballyfin, scored a total of 565, and hopes to go on to UCD to study physics. His best subjects were history and physics,

He was attended on the morning by his proud mother, Christina, who said she was delighted with her son’s results.

“I’m delighted now, I had been feeling sick, it was nerve-wracking. It’s all over now and he did great. He worked hard and he deserved it,” she said.

Martin Walsh, Portlaoise, said he was happy, even though he had not got quite enough for his first choice course. His best subjects were agricultural science and business.

While most students wasted no time in getting their results, a few seemed to savour the agony and the ecstasy of the moment by delaying the opening of the envelope.

“I haven’t looked yet,” said Dominic Pindi, originally from the Ukraine but now living in Portlaoise, when asked what his results were.