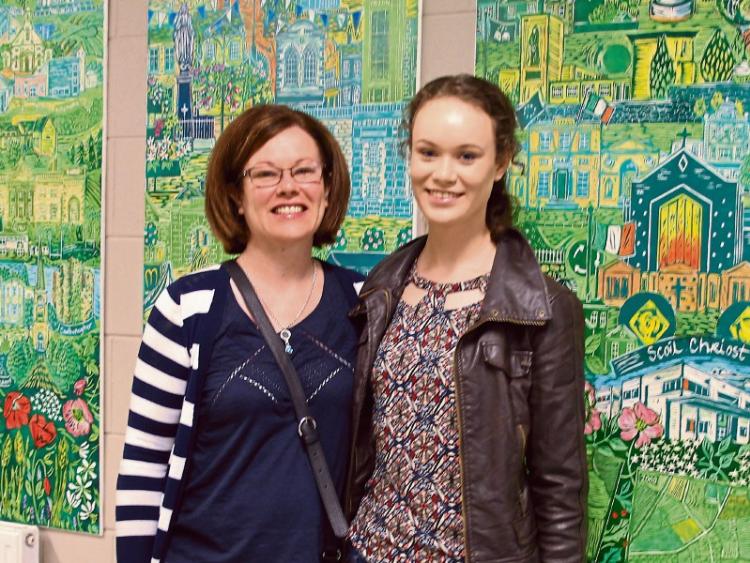 The vast majority of young women who collected their leaving cert results at Scoil Chriost Ri in Portlaoise appear to have realised their academic goals, with high marks across the board in all subjects this year.

A top mark of 625 was achieved by Portlaoise’s Anna Healy, who garnered 7 A1s.

A further three students got 7 As, and principal, Helen O’Donnell told the Leinster Express that the majority got what they needed, or got something that will bring them to college.

Praising the “great, great results” of the students, Ms O’Donnell said that the standard was up this year, with most planning to go on to third level education.

Among the many delighted young ladies was Cliona Browne, Portlaoise, who obtained an A2 in French.

With an impressive overall score of 505, she said she was “absolutely delighted” and is planning to go on and study primary school teaching.

Sarah Cullen, Portlaoise, said she was “absolutely ecstatic” with her score of 415, which is enough to secure her a place on her first choice course of journalism.

Julianna Neiman, originally from Russia but living in Ireland most of her life, said: “I’m don’t know if I’m happy or not. I got most of the stuff I wanted, but I didn’t get enough in history.

“I got enough for second choice. My best was an A1 in Russian.”

Her friend, Serena Kienge, Portlaoise, said: “I did better than I thought I would, I thought I’d failed biology. I got enough for my second choice, DCU studying international languages. I’m happy.”

Eadaoin Kinsella, also Portlaoise, said: “I’m happy enough with what I got, I think I’m okay, I’ll have to wait until next Monday to see the offers. My first choice is Cork to do nutritional sciences, so fingers crossed. I’m happy enough.”

Josephine Delaney, Portlaoise, said she had done “brilliant” and was delighted to have got enough for her second choice, midwifery, as her “first choice was a long-shot”.

Grainne Delaney, Portlaoise, said she was shocked to have done so well, and had secured enough to do her first choice of art and design.

Her best subjects were English and business.

Her friend, Ciara Ramsbottom, Portlaoise, said she was “happy enough” with what were very high grades, but as she was 20 points off securing her first choice of law she intended getting some of the subjects rechecked.

“I’m definitely getting my business rechecked, the same with Irish,” she said.

Most of the students intend going on to third level education, with a lot of interest expressed in science-based courses this year, as well as quite a few interested in primary school teaching.