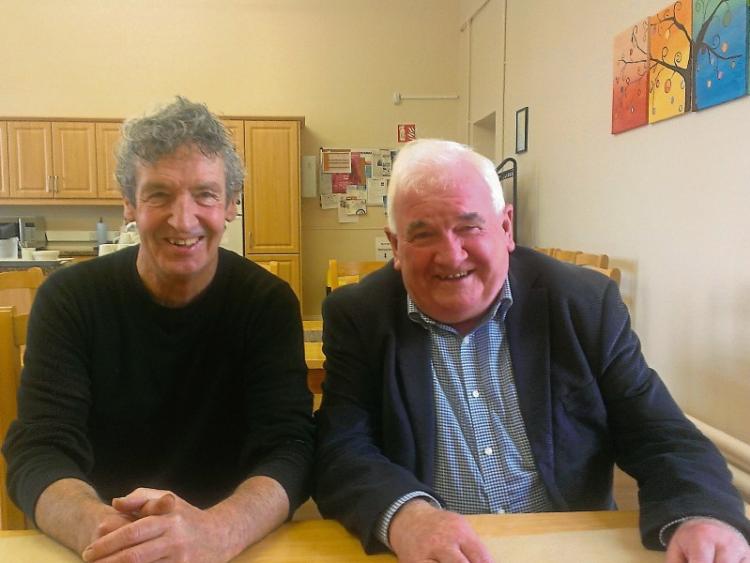 Achieving a high grade in Leaving Cert English is commendable for any student, but it’s even more impressive for adults who have returned to education after unpleasant childhood experiences.

Two such men are Tommy Spillane, originally from Birr but now living in Portlaoise, and Portlaoise native, Frank Gallagher, who sat the Leaving Cert at the Laois & Offaly ETB in Portlaoise.

Tommy achieved a grade A2, while Frank got a B1.

Neither man has fond memories of his school days, with Frank admitting he didn’t like having to walk into the old CBS building which now houses the ETB, while Tommy talked of the ordeal he suffered at the hands of his old primary school teacher in Birr.

“A lot of people of my age, the confidence would have been knocked out of us at primary school,” Tommy said.

“We would have been physically beaten each day, by one particular lay teacher. To this day I don’t understand what satisfaction he got out of it.”

Inspired by his four children, Tommy eventually worked up the courage to enter the ETB, as he always knew he wanted one day to return to education.

“The first day I walked into that room, I was as nervous as I was going into the school in Birr, but within one hour it was like I knew everybody in the class,” he said.

Frank made the decision to return to education as an adult learner, after a stroke left him unable to continue his job as a furniture mover.

He always wanted to do maths and he finally realised this goal when he sat Junior Cert maths at the ETB.

“I did the Junior Cert in maths about three years ago and I passed that, it was the first maths exam I ever passed,” he said.

Both men sat their Junior Cert English last year and passed, prompting them to go on and sit the Leaving Cert, which they completed in just one year.

“I enjoyed the class, I didn’t enjoy the exams,” admitted Frank, while Tommy said the part he enjoyed most was the compositions, because “virtually all I was writing about was my own life story”.

Both now intend to go on and do further studies in the centre, with Tommy considering the option of Leaving Cert maths as one of his grandchildren is sitting the subject next year.

There were also celebrations in the Abbeyleix FET, where a number of students received exceptional Leaving Cert results.

Both students and staff were delighted with the results, with one student commenting: “This has opened new paths”.

The students are wished all the best in the future by all the staff.