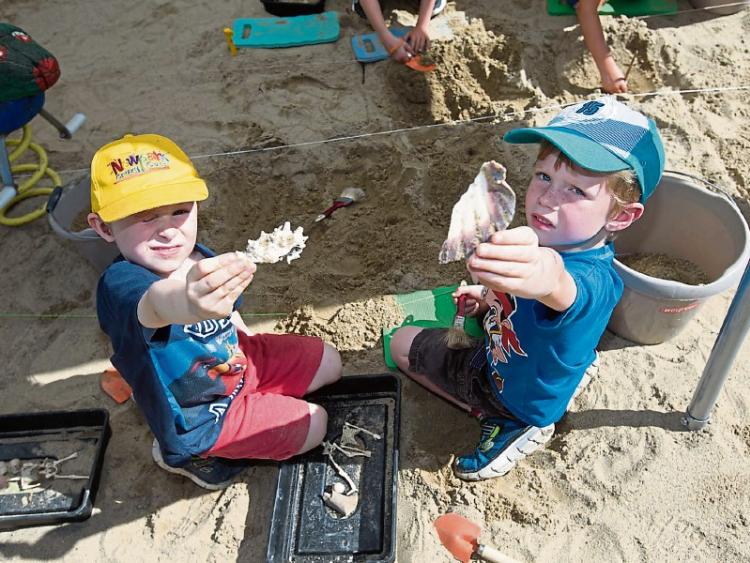 The Heritage Week 2016 events at Heritage House, Abbeyleix were a resounding success.

The kids archaeological dig on Thursday was booked out weeks in advance and the weather was perfect for digging in the dirt to find ancient bones, pottery and shells. “We were very lucky to have Steve and Lissane from Dig it Kids on board to give the budding archaeologists an experience to remember” said Paula Maher, manager of Heritage House.

Such was the clamour for places on the dig that Heritage House hopes to run it again in the near future.

There was also an interactive toy workshop run by Cormac Bowell of Sandymount Education who has been collecting old games for years. He had a vast selection on display with interesting names like shut-the-box from 1840 to deflection from 1990 and was delighted with the turnout each day and the interest shown by young and old alike.

Cormac, an Abbeyleix native, who has lived in Chester for many years is also involved with re-enactment groups and living history societies among other things and would very much like to bring his brand of interactive education back to Ireland on a more regular basis.

Abbeyleix Heritage Company would very much like to thank all who called to Heritage House during the week and especially all the enthusiastic and curious kids who filled the place with noise and laughter.

They also want to thank Catherine Casey, Laois Heritage Officer, for her continued support and enthusiasm and Jonathan Carthy, Shane Lewis and Trudy Earls for their extra hard work.