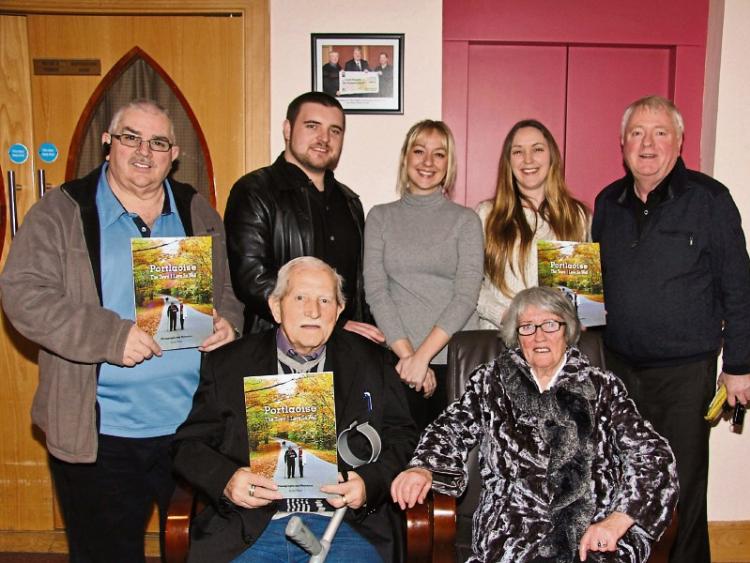 A parcel from Ireland was delivered to Margaret O’Brien when she was in Australia in 2010.

In it was a book, ‘Portlaoise People,’ compiled by her grandfather Johnny O’Brien.

“It went down great, particularly with Portlaoise people out there,” she recalled, smiling. “Anyone from Ireland got a kick out of it.”

Fr Paddy Byrne CC, launching the 138-page volume, noted that Portlaoise footballers had failed in their 10-in-a-row bid. But Johnny had achieved 11-in-a-row—the number of books he’d produced since 1993.

Among the Maryboro’ old stock who turned out for the launch ceremony was Lily Keenan, a former Marian Avenue neighbour of Johnny. With her was her popular son Jimmy who took a hand in helping to sell ‘The Town,’ as we shall call the book for brevity’s sake.

Staying with the Keenans…it was their company, Quality Printers Ltd, that designed and printed ‘The Town.’

Lisa Lynch made sure to get her copy. “My father Aidan collected all of Johnny’s books,” she said. A St Brigid’s Place resident, he died last June.

It was an especially happy evening for Kathleen O’Brien (no relation to Johnny), of Millview and formerly of old Knockmay Road. A townie to the core, it was her birthday next day and she was serenaded with song.

Sadly absent was Johnny’s sister Mary Martley who died two years ago. In ‘The Town’ is a moving tribute to her written by Pat Delaney.

Johnny tried to convince the gathering that it was his last publication. “Only for Fr Paddy it wouldn’t have been launched,” he said.

“The people of the town are great,” Johnny enthused. “This town is full of history.” He thanked Maura, his family and all who had helped him with the publication.

Fr Paddy described the book as a great and wonderful achievement. Coming towards Christmas, it was wonderful to have a sense of place, he said. He was delighted that many of the photos were contemporary based on parish life.

Portlaoise was the strongest parish not alone in the Diocese of Kildare and Leightlin, but in Ireland, continued Fr Paddy, and it had been chosen to launch Catholic Schools’ Week on January 29

In the parish’s RC schools, primary and secondary, were over 5,000 pupils, he revealed. Defending RC education, he said the media subjected it to “a lot of knocks.”

He said the parish was getting new schools of excellence. The existing St Paul’s building would be demolished to accommodate a purpose-built St Francis’ NS.

Fr Paddy added: “Despite huge challenges, Johnny has come before us with a production that anyone would be pleased to give to others.”

MC at the launch ceremony was Eugene Lacey.