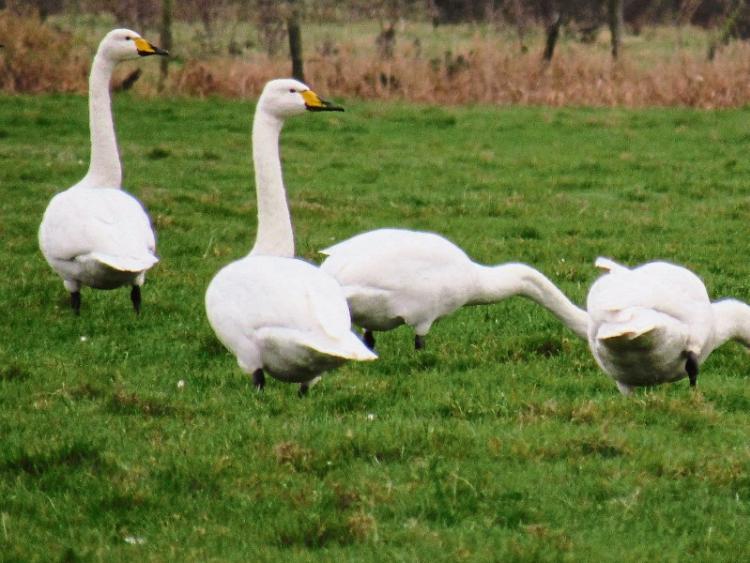 In Ireland we see three species of swans. Most of us are familiar with the Mute Swan which can be seen all year round on many of our rivers and lakes.

The Bewick Swan is the smallest but is now rarely seen in Ireland. Thirdly there is the Whooper Swan a winter migrant which breeds in Iceland. Each year at the end of October about 15,000 of them head for these shores to over winter until their departure at the end of March or early April.

The vast majority of them spend these months on inland wetlands in counties north and west of a line from Limerick to Louth. They are a large white swan with a long thin neck which they usually hold erect and have black legs.

Their bill is black also but with a triangular patch of yellow in contrast to the orange on the bill of the Mute swan. They are quite vocal with their trumpeting calls heard from some distance. They generally feed on grassland or stubble near water bodies.

Currently, as is usual, there is a flock of Whoopers on The Curragh in south Laois. Family parties start making the flight non stop from Iceland to Ireland from mid October onwards. The first 13 birds arrived on the 21st October with numbers building up over subsequent weeks to 128 by the 25th November. This is the highest count in the area for many years and is now almost reaching national significance which is about 150 birds. The flock this year includes 26 juveniles whose plumage is pale grey, with no yellow on the bill until they get older. As there has been no flooding so far this winter they generally stayed together initially on fields adjacent to the River Erkina which they use for bathing and drinking.

They have been visible to the public from the Woodenbridge in the direction towards Durrow. Recently they have started to split into smaller groups, being seen also on fields beside the river Goul. In times of flood they can be observed at many sites throughout south Laois including on the Nore floodplain from Cloncough to Waterloo Bridge.

The really special thing about this flock is that it is the only one in Laois and for many kilometres further with none in Carlow, Kilkenny and most of Kildare. In years gone by this area also played host to flocks of geese but now only occasional birds visit.

When there is no flooding some of them often fly to Grantstown Lake to roost and one of the most spectacular sights and sounds is when they congregate here just prior to their departure for Iceland. Birdwatch Ireland (Laois Branch) would encourage landowners and residents in the area to continue to support their presence and not to disturb them while they overwinter in our locality.

Many other species of birds can be seen in this area such as grey heron, little egret, cormorant,little grebe,moorhen,kingfisher, kestrel, buzzard, stonechat and mallard with good numbers of teal, wigeon, lapwing, golden plover and migrant curlew during flooding.

Further information on all birds can be found on the "Birdwatch Ireland" website, but why not come along to a meeting of your local branch. In Laois meetings are held in the Parish Centre Portlaoise at 8pm on the last Tuesday of the month.