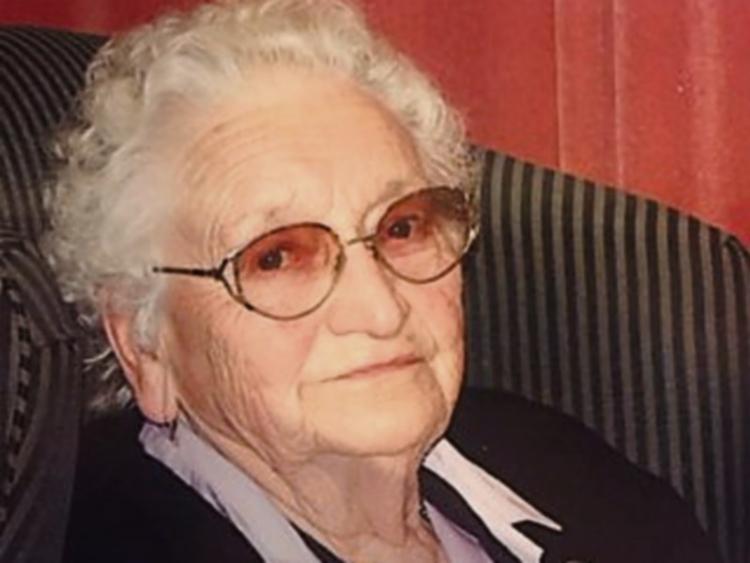 Sara O’Loughlin of Meelick, Rosenallis who died, in her 98th year, on the 10th of January was a well known and respected member of her local community, and enjoyed a long, fruitful and very active life.

She was born Sara Delaney in Upper Forest Mountmellick in 1919, the fourth child in a family of eight, to parents Michael and Mary (nee McCormack). Her sister Kathleen (29) was an early victim of the Polio epidemic in 1953 while her brothers Martin and Pat and sister Peg (Ryan) lived into their 80s and 90s.

She was raised on the family farm and, like most other people in rural Ireland of the 1920s and 30s, experienced the social and economic difficulties which resulted from the Great Depression and the ‘Economic war’, between Ireland and Britain.

She was educated in Mountmellick National School and later in St. Mary’s College but, regretfully, the challenges and demands of farm life in Forest severely restricted her studies there. The years spent at the daily grind of life on the farm instilled in her an appreciation of the value of education and this was subsequently strongly ingrained into her own family.

Much of her teenage energies, along with her brothers and sisters, went into developing the land into a viable unit which would provide the family with a decent standard of living and an appropriate level of education. Her experience here was probably a major factor in the development of a fiercely independent spirit and a quiet, but single minded, determination to achieve her ambitions and goals. In this she was always an inspiration to those around her and on whom she left a lasting impression and legacy.

Cycling was a practical expression of this independence and her love of the ‘bike’ led her to take on many journeys around her own locally and far beyond, including an unaccompanied round trip, in the early forties, to visit her sister Lil in Portumna. A few years after her marriage the bike was replaced by the car, a vehicle she maintained a lifelong, if often uneasy, relationship with and allowed her to prolong her highly valued independence well into her mid nineties. Her determination led her to take on, and overcome, many challenges throughout her life as evidenced, many years later, when in her eighties she undertook, again unaccompanied, a flight to the United States to visit relations.

Her commitment to education, and a deep seated need to further develop her talents, led her to cross the Irish Sea to London in the late 1930’s to study nursing. The outbreak of World War 11 in September 1939 however, forced her to return prematurely to Ireland. Soon after Sara renewed her relationship with Tom O’Loughlin from Rosenallis and in 1944 they married and they set up home in Meelick. Going ‘home’ to her new abode, after her wedding, was her first visit to Meelick.

The couple produced ten children and life was reasonably contented until tragedy struck in September 1959 when Tom was killed in a farm accident, leaving Sara with the biggest challenge of her life, running a farm and rearing a large family.

At the aged of 40 the new situation was obviously a severe test of character, even for Sara, but she faced it with her usual determination and will to survive.

The need to provide for the family drove her, with the help of her brothers, sisters, brothers-in-law and neighbours, to succeed as she very well aware that failure was not an option. The situation demanded ‘all hands on deck’ and the children’s contribution was also essential as each one learned the reality, and the value, of the hard work required to keep the show on the road. Despite the prevailing difficulties and obstacles she was determined that everyone would be educated. Her attitude was very simply, ‘life must go on.

As the family grew and settled and grand children duly arrived, life became relatively normal until the premature death from cancer of her eldest daughter Ann Marie (Murphy) of Durrow in 1988. Further tragedy was heaped on the family when Ann Marie’s daughter Aishling lost her life in a shocking road accident in 2000 and, eight years later, in 2008 her ‘special daughter’ Kathleen (who had Down’s Syndrome) passed away. In 2012 Sara struggled to come to terms with the loss of her second daughter Breeda (Bennett) of Clonsast, and similarly so with the death of her son Tom in 2015, both of whom succumbed to cancer.

Further grief was to follow over the next three years with the deaths of her sister-in-law, and close friend, Máire Delaney and also Tom’s wife, Geraldine Brickley and Declan’s wife, Liz Coyne.

The burdens of family life did not prevent Sara from playing an active role in her local community and, in 1966, she became a founder member of Rosenallis Irish Countrywomen’s Association. She subsequently held every officer position in the Guild and remained active and committed until recently. Her contribution to the organisation was acknowledged in December 2016 when she received a citation from the ICA’s National President, Marie O’Toole. Prior to that, in 2007, Sara’s achievements, and those of many other farming women across Ireland, were recognised at a ceremony in Aras an Uachtaráin hosted by President Mary McEleese.

Though she was never involved in sport herself, she developed, mainly after the death of her husband Tom who was an accomplished hurler with Rosenallis, a keen interest in sport, particularly GAA. She always encouraged her children’s, and grand children’s, participation in sport, and many of them maintained a lifelong interest and involvement, both on and off the field, across a wide spectrum including hurling, camogie, hockey, football, ladies gaelic football, rugby and soccer. She was extremely proud to watch them play in their club colours and particularly so in the blue and white of her native county.

Sara had deep religious convictions and a strong belief in God and the afterlife and this faith sustained her, with few exceptions, throughout her life and enabled her to bounce back from setbacks and simply ‘get on with life’.

The huge crowds that attended her removal and burial last week bore testimony to the contribution and the impact she made in the communities of Rosenallis and Mountmellick, and further afield, and also the respect with which she was held by so many people..