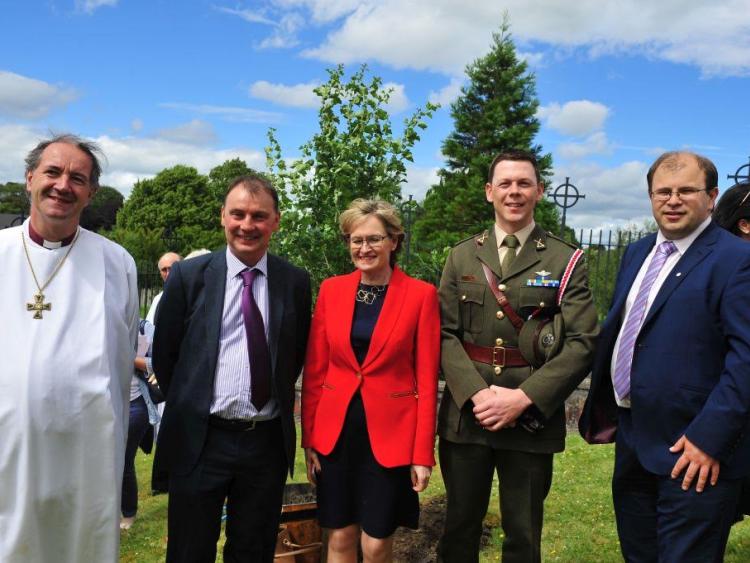 The annual Embrace Ecumenical Farm Remembrance Service was held in the Church of the Most Holy Rosary Abbeyleix on Sunday last to remember people who have died or have suffered injury from accidents on farms.

The service, which has been held since 2014, was well attended. It was led by Church of Ireland Bishop, Michael Burrows and in attendance were local clergy from the Catholic Church and the Church of Ireland.

A number of families told Brian and Norma Rohan, who founded Embrace Farm, how they went to the scene of where the accident had occurred, where their loved one was killed, and brought a handful of earth from there to be include in the service.

Everyone's earth was carried outside by the ICMSA President, John Comer and Macra President, James Healy to where a tree was planted as a symbol of uniting the loss of loved ones in one place.

The tree is intended to stand as a reminder that people are on a common journey and that the sharing of experiences through the support of Embrace Farm will help people cope with the burden of loss.

The mix of people who are affected by farm accidents was shown in those who brought up the symbols. The Lyons family from Offaly, who lost their 5 year old boy, brought a family photo showing that farms in Ireland are a family affair.

Patsy O'Connor from Roscommon, who lost his wife Lucy, brought his hat, a familiar sight on farmers and Carol Devereux from Wexford, who lost her dad Paddy, brought a basket of food which farmers work hard to produce.

Farm accident survivors Aengus Mannion, who has gone through over 30 operations to be able to walk again, and David Brickley, who fell through a slatted shed, also brought symbols to the altar in representation of the animals and machinery that are a part of every farmer’s life daily.