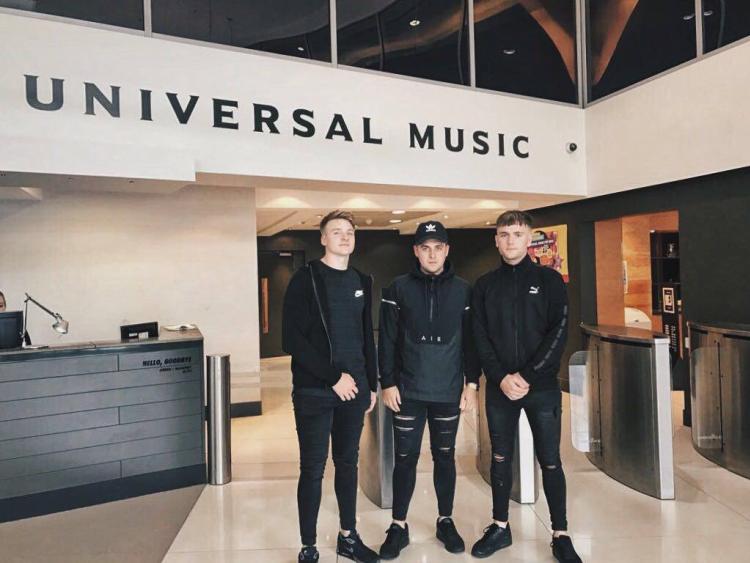 Three young Tullamore lads are celebrating this week as they have just been signed to one of the biggest music record labels in the world.

Having grown up sharing a love of music together, Ro, Bee and TeddyC from pop/hip-hop band 'Chasing Abbey' have been offered a contract to work with the American based Universal Music Group and 3Beat UK.

The contract is the golden ticket to stardom that the band has earned having stormed the charts in recent months.

Speaking to the Leinster Express, Chasing Abbey band members said the feeling has not sunken in yet.

"It's a great feeling being signed but it hasn't sank in too much yet. It was always a big goal of ours to get signed and now that we're here it's really just another stepping stone in our journey. We have big plans and signing this deal with Universal gives us a platform to share our music with the UK and the rest of the world," they said.

The Midlands group who recently rocked Portlaoise at the Old Fort Quarter Festival will be moving on to bigger stages with the support of the huge label behind them.

Getting a record deal is a goal all musicians strive for, and the lads had some advice for anyone trying to achieve this.

"The best advice we can give any up and coming artist is to work hard, and when you think you're working had work even harder," they said.

The band took to Facebook to share the news with their fans at the weekend and they received a fantastic response.

"12 months ago we started Chasing Abbey. Today, we signed a global record deal with 3Beat UK/Universal Music Group. Thank you all so much for your support and belief. You've made 3 young pups' dreams come true," was written on the Facebook post.

The three young pups have shown their teeth in the intervening 12 months, with upbeat hip-hop track, That Good Thing, receiving widespread acclaim, putting them in front of a massive radio and live circuit audience.

While they were in Laois at The Old Fort Festival the three down to earth lads sat down for a chat with the Leinster Express.

The band has been playing around the country this summer at festivals like Sea Sessions and Kilkenny Music festival and they will play the Academy Green Room this September.

It's now expected that the band will begin work on new material and there is sure to be exciting times ahead for this up-and-coming group.

Have a listen to the chart-topping song, That Good Thing.