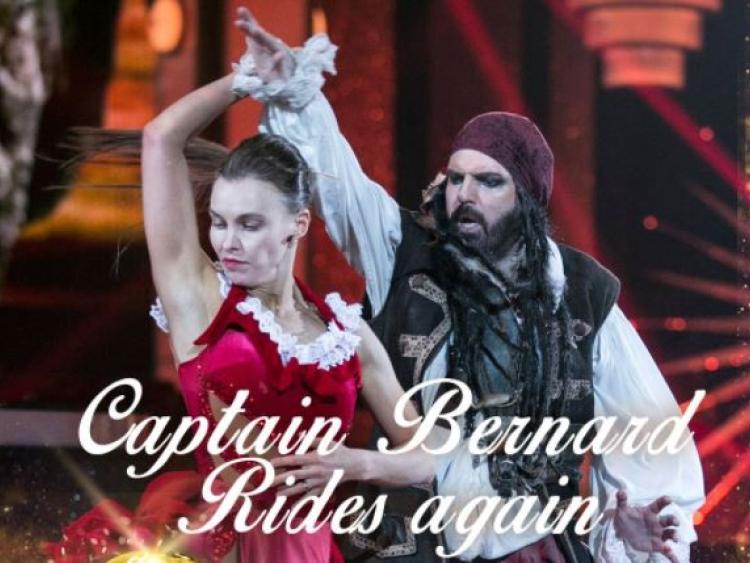 Laois man Bernard O'Shea entertained the nation on Sunday evening's episode of Dancing with the Stars Ireland on RTE One.

Bernard and his dance partner Valeria Milova took on the Paso Doble to the music 'He's a Pirate' from Pirates of the Caribbean.

The Laois comedian and radio presenter really embraced the theme and embodied captain Jack Sparrow in a dramatic outfit sporting dreadlocks and plenty of eye makeup.

"I never thought I'd be on national television with my mascara running," the Laois man joked.

The dance was entertaining and grabbed the attention of many viewers and even tough judge Brian Redmond was impressed.

Judge Loraine Barry said that Bernard is going from strength to strength.

"I think this is Bernard saying goodbye beginner, hello competitor," she said.

Judge Julian Benson was also pleased with the performance and said the Durrow man attacked the role.

"There is plenty of treasure in my heart for you," Julian said.

Click here to watch Bernard O'Shea on Dancing with the Stars Ireland on Sunday, January 28.

As always, Twitter came to life during the show on Sunday evening and there was some great responses from the public.

Bernard should get bonus points for doing Jack Sparrow. At a disadvantage given that Laois is only county not to touch another county that touches the sea #DWTSIrl

Tomas O'Leary was sent home on the night and Bernard has made it through to dance another week.

"I've had amazing craic", it's the end of the road for @Tomas_OLeary & @GiuliaDotta tonight! So sorry to say goodbye #DWTSIrl pic.twitter.com/yJezjBL5iV

Watch: Bernard O'Shea on Dancing with the Stars last week.