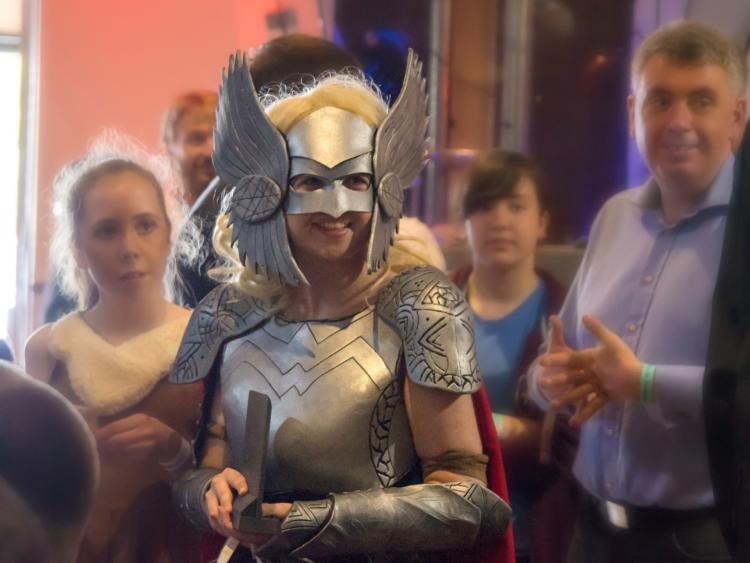 The Almighty Thor, one of the winners of the cosplay event at last year's comic con in Portlaoise.

Charge up your lightsaber, sculpt the latex six-pack, and polish up your magical Uru hammer, for there’s an unmissable night of Cosplay action coming to O’Loughlins Hotel this March where the fantasy faithful can dress up as their favourite comicbook and sci-fi characters.

The Cosplay/Geek Ball is a special fundraiser for this year’s Celtic Con - Ireland’s Midland Comic Convention, a weekend of superpowered superheroics and fantasy escapism that will descend on Portlaoise for two days in June. The fundraiser, organised by Martin Moore of Celtic Comics on Railway Street, takes place on Friday, March 23, at O’Loughlins Hotel on Portlaoise Main Street.

The kids disco for U12s takes place from 4pm to 7pm on March 23, with a trophy for best costume. The adults ball will begin at 9pm, with the fun expected to rock on into the wee hours until around 3am. Teens under 18 need to be accompanied by an adult, parent or guardian.

The best male and female Cosplayers get to be King and Queen of the comic con in June as well as pick up some special trophies.

The day promises fun for all the family with spot prizes and a full bar at the evening ball and disco. There may also be a rock band playing on the night, so keep an eye on the Celtic Comics Facebook page for more details.

Celtic Con - Ireland’s Midland Comic Convention will be hosted once again this year at O’Loughlins Hotel and the 2018 event is spread over two days, June 23/24. More details will be posted on the Celtic Comics Facebook page in the coming months.