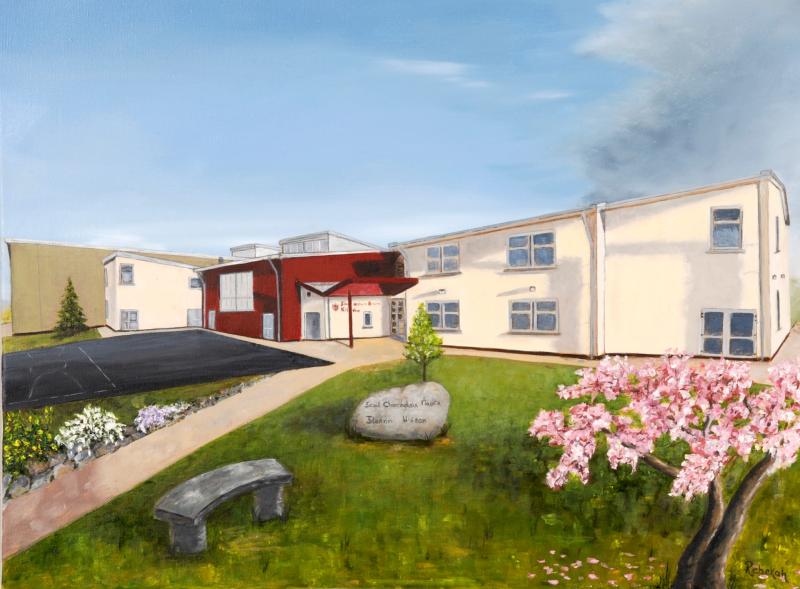 A painting of Killeshin NS, one of three schools that Laois pupils are travelling to via schoolbuses on untreated roads

A hilly area of narrow roads in Laois used by a 56 seater schoolbus is not salted in icy weather by Laois County Council.

Now local councillors from east Laois are offering to pay for gritting trucks to make the roads safe.

Schoolchildren going to Killeshin National School, Knockbeg secondary school and St Leo’s College in Carlow, all use the roads in Coolane, Killeshin and New Line, Rossmore.

However they remain off Laois County Council’s salting route, despite repeated requests by Cllr Ben Brennan.

Cllr Brennan made another request at the February meeting of the Portarlington Graiguecullen municipal district.

He got another negative response from the council.

“The specific roads are not included in the Priority 1 or Priority 2 network” was the reply from engineer Philip McVeigh. He added that routes are based on traffic volume and designation, and are also dependent on the capacity of the council’s fleet and the funding for gritting.

“I am actually disappointed. A 56 seater bus runs on that road. I defy anybody to come down there in a car on a frosty day, let alone 56 children in a bus. Fifteen minutes would salt that road, it would take feck all salt. It will go on it, but only when there’s an accident. It’s looking that way because there is water running on that road as well.

“If a bus hits the bank, it will fall off that road. They can’t go another way, its not on their bus route,” he said.

Status yellow rain could be followed by more snow this weekend

“In fairness these are very dangerous hills, and narrow roads. These issues have been raised before, i think it should be looked at again,” he said.

“Sometimes they can be categorised incorrectly,” he said.

Cllr Brennan then offered to give €1,000 from his annual Discretionary budget to the cost, “for the safety of children and people on that road. I fear it, God almighty I fear it,” he said.

Cllr Paschal McEvoy later offered to match that amount from his budget.