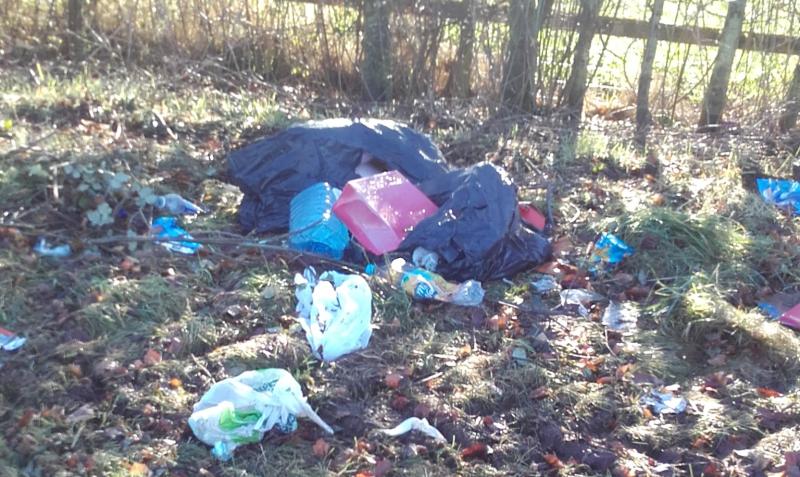 Some of the household waste collected by Laois County Council staff

Hard earned taxes are being spent removing truckload after truckload of illegally dumped rubbish from litter blackspots around lovely Laois according to the latest figures from Laois County Council.

With less than three months of 2018 gone, the council has been forced to remove an astonishing 35 tonnes of waste for locations right around Laois.

In total, environment staff have removed 34.72 tonnes of dumped rubbish from nearly 20 blackspots.
The target sights are bogs in Clonsoghey, Togher, Clonad, Lauragh and Clonanny. Also the Borness Bridge and Bay Road in Mountmellick, Clonaghadoo, Cloncourse, Mountrath, Pallas and at six locations in Ballyfin.

The battle against illegal dumping in Laois is ongoing, but up to the end of February, no prosecutions or convictions have been made in 2018.

However, 16 litter fines were paid up, reported the Laois County Council Chief Executive John Mulholland at the February 26 meeting.
“It is only very early in the new year. These figures relate mainly to January. The message is there is no escaping fines if you are dumping,” Mr Mulholland said at the meeting.

There have been 69 environment complaints to the council so far in 2018, mostly about litter and waste.
Cllr Willie Aird said that the dumping in Togher “dumbfounded and disgusted” him.
“It is obviously being dumped on a daily basis. We are losing the battle over waste hand over fist. I can’t understand why this litter has become a plague on society. Can we get funding to invest in more cameras?” he asked.

Cllr Tom Mulhall from Emo said that 16 fines was very low.
“Thirty five tonnes of litter is a huge volume. We all welcome Clean Up Laois Week, but God help communities the amount of work they’ll have to do,” he said.

In 2017, the council issued a total of 189 litter fines, and secured 11 convictions.
“We expect at least that again this year,” said Donal Brennan, Director of Services for the Environment.

Clean Up Laois Week takes place from April 23 to 27, when communities will be given bags gloves and litter pickers, and what they collect from the countryside is taken away to Kyletalesha free of charge.