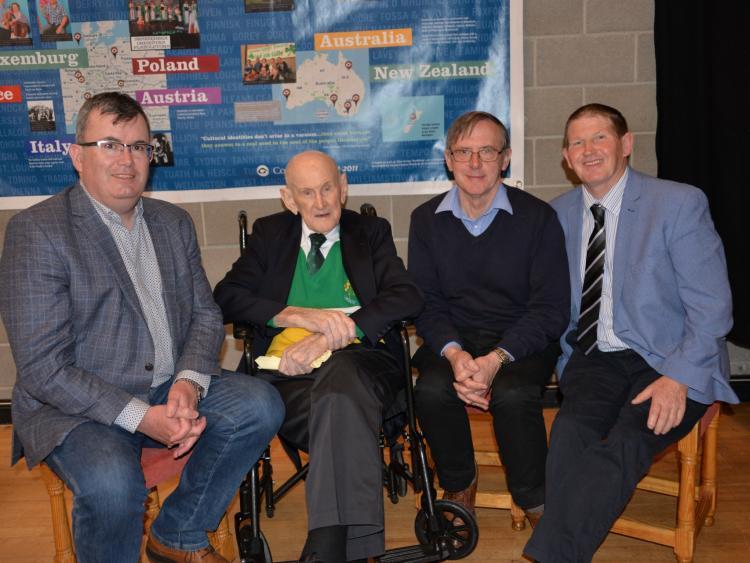 Laois man Bill McEvoy was one of the founding fathers of Comhaltas in North America and he hasn’t forgotten his roots.

The Durrow native emigrated to New York in 1954 and he has lived there in Long Island ever since. He was involved in the nascent days of Comhaltas around Dublin in the early 1950s and he brought a passion for traditional Irish music with him, as well as his fiddle, to America.

Born into a musical family on January 13, 1923 in Laois, Bill is the son of musicians. His father played fiddle, which became Bill’s instrument, and melodeon as well as being a renowned Sean Nos singer, and his mother played the concertina.

Bill’s entire life has centred on music and Ireland’s Gaelic games – he attended his first All-Ireland hurling final at age 10. His early days were spent in Dublin, where he spent much of his free time at the Stonybatter home of Jim Seery, later among the founders of Comhaltas.

Bill also linked up with the late Leo Rowsome and joined Piper’s Club at 14 Thomas Street, serving as its Runai in 1947-48. During this time Bill fell in love with the lovely Lily Kelliher from Lixnaw. Co. Kerry and they were married on February 21 1950.

Bill and Lilly reared nine children. Sadly, Lilly passed away after a long illness a couple of years ago. In addition to rearing his family, he is also known as the founding father of Comhaltas in North America.

Bill, accompanied by his daughter Kathleen, visited Ireland at the start of May to coincide with the annual Comhaltas Congress in Dublin.

Despite his years, he continues to display energy, passion for music and continues to follow Irish music and sport in close detail. His address to Congress brought the attendees to their feet, and he noted that communications within Comhaltas continued to be critically important to developing the organisation into the future.

Bill has never forgotten his Laois roots, and he was delighted to meet with some of the Laois representatives at Congress during the day. He met with PJ Phelan, Jody Conway and Lawrence Vesey - Chairs of Laois, Leinster and Spink Comhaltas respectively.

Displaying good humour and wit, he noted that his only regret was not having knee replacement surgery when he was 80 – he reckoned he would continue to be mobile now if he had!

The current generation of Laois musicians will be competing in Laois Fleadh Cheoil in Portarlington between 31 May and 2 June, and they continue to celebrate the legacy established by people like Bill McEvoy.

Spink Comhaltas and people across the wider Comhaltas family have wished Bill and his family all the best for the future.

MORE: Laois couple go the extra mile to the ballot box on their wedding day