Revealed: The 11 plucky Mountrath women who are the town's Calendar Girls 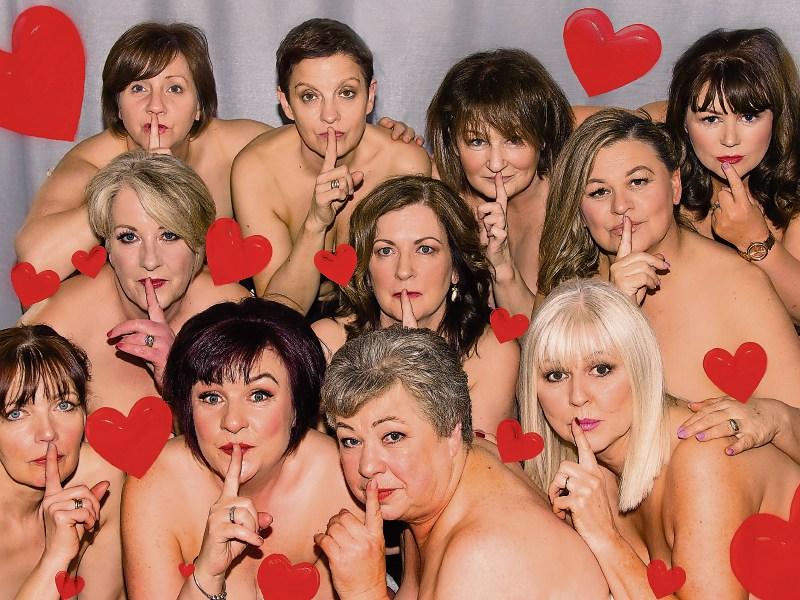 The Mountrath Calendar Girls who revealed their identities on the launch night of the calendar, in aid of Mountrath's Christmas lights. Picture: Lori Strang

Just like the movie, a group of brave and confident Calendar Girls in Mountrath have bared all in a calendar for a great local cause.

The identities of the eleven ladies were kept a tight secret until launch night on Saturday September 23.

The calendar was launched to a packed attendence in Eddie Kirwan's pub. Mountrath native, RTE journalist Claire Byrne called out their names one by one to come on stage and reveal their identities to a glass of bubbly and cheers from their families and friends.

The calendar features stunning photographs of the women, with artfully positioned props protecting their modesty.

December (above) features all the lovely ladies in a group photo.

It is all for a good cause.

Colette Phelan is Miss February and the chairperson of Mountrath Christmas Lights committee.

“It is all to raise money to replace and upgrade our Christmas lights in Mountrath. The lights are at real risk of not being turned on this year unless we manage to sell all 500 calendars we got printed,” she said.

“Our running cost without buying a bulb is €3,000 a year. This year we have to replace the centrepiece on the roundabout, it's ten years old and when we bought it we were told we might get three or four years so we've done well,” she said.

She also hopes to raise enough money to add lights to the real trees now on Patrick Street.

Making the calendar was fun and empowering she said.

“All the girls taking part brought a real sense of fun. The baby of the group is 48 . We are all grown up many with grown children and it really felt like we were empowering ourselves while doing something fun. They are very classy photos,” she said.

The theme of the calendar is Ireland and each month's pin-up has different props depending on their interests.

“I never laughed so much. I used to be a baker so I've got a big Odlums bowl which I held extremely tightly, and cookery books in front of me” said Colette .

She hand wrapped each calendar herself so that buyers must shell out their €10 before having a look.

Her poor son Fionn in Canada got one in the post.

“I sent it out but I hadn't told him I was in it. He said 'I should have known'. I thought he'd be mortified but he found it so funny. My husband Eddie like all the husbands and partners are taking all the hype in their stride. We all know they are secretly proud,” she said.

“We see the serious side of her on television but she was so charming and funny and warm, we are delighted she came,” Colette said.

“It was the biggest crowd I've seen in Mountrath in 20 years, I've never seen so many in Eddie Kirwans, we got a marquee and a stage it was so girly, most of the audience were women, it was like a wedding,” she said.

She admits to nerves the moment before her own name was called.

“I thought oh God what have I done, I felt blind panic. But we were all in it together and we all got a great response,” said Colette.

The calendars are on sale in Centra, Telfords and Celine's Hair Salon, with 400 already snapped up.