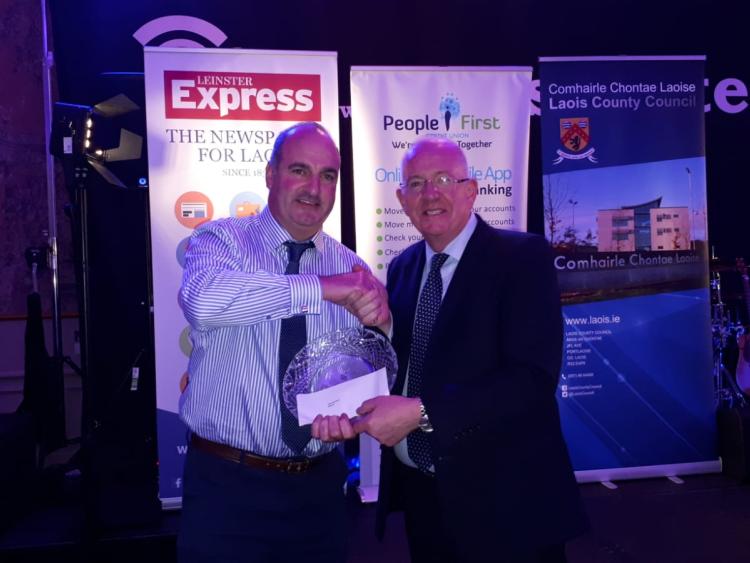 Donal O’Shea has won the Unsung Hero Award at the Laois Community and Voluntary Awards 2019.

Donal O’Shea has been instrumental in the cohesion of Stradbally through his work with the SVT, The Development Association and the Electric Picnic.

The judges had high prize in their citation.

"The winner is involved in many community groups and initiatives that have developed community infrastructure, increased local capacity, benefited health & wellbeing in the community and supported the environment. The projects he has been involved with have impacted positively on a large cross section of society from young to old and everyone in between.

"While working hard at local level the winner has also contributed significantly at regional and national level to promote understanding and inclusion for people with disabilities and those struggling with poor mental health. His contribution to social change at national level, along with his extensive contribution to local action is what made his application stand," it concluded.

The runner up this year is Maureen Bradley.  Maureen is always on hand to provide young people with opportunities and has worked with young people for 42 years at the Daredevil’s Foroige Club in Portlaoise.

The following is the full list of other nominees in the Unsung Hero section who also received Certificates of Achievement for their contribution to their communities.

Alison Browne has worked tirelessly on many committees in Portlaoise and is described as an”absolute dynamo” with a deep love of her town.

Maureen Culleton is nominated for her tireless work as director and founder of the Sing for Joy Choir, a group in which people of all ages with physical and intellectual disabilities participate.

Pat Critchley has made a significant contribution to sport in Laois in particular with his work with Basketball. He has been described as “an ambassador for his sport”.

Sr Regina Delaney now retired from teaching continues to serve the community where she is a member of several organisations where she makes a difference.

Patricia Dwyer through her involvement in a variety of organisations has contributed greatly  to the fabric of Community Life in the Swan.

Mick Dowling. Nominated for his lifelong involvement with the GAA, community alert, first aid, the development of walking trails and tourism guides for the area, and contribution the Laois Age Friendly Programme and Laois PPN.  Ar dheis Dé go raibh a anam.

James Furlong Spearheaded the reopening of Ballinakill Open-air Pool in addition to his involvement in a wide range of Community Activities.

Radwan Abou Hajar Described as an inspiration and positive role model for his efforts to bring the Syrian and Laois Community together.

Angela Hayes Founder of Teac Tom and an inspirational and tireless worker providing a unique service in Laois and whose work deeply touches those affected by suicide and mental health issues.

Abisola Idris through Gospel Music reaches out to her Community and promotes social inclusion and makes a valued contribution to the community.

Anna Kaye Through her involvement in a variety of voluntary organisations Anna has contributed a great deal to Community Life both in Stradbally and Ballylinan.

Mary T Kelly plays a key role in the Swan Ladies Club in addition to working hard to promote a sense of inclusion and social cohesion in her Community.

Geoff Kennedy nominated for his contribution for aesthethetically improving the appearance of Timahoe and adding to the culture and heritage of the village.

Tom Lowe has worked tirelessly to set up the Bikers Shed facility which provides an open door facility to the biking Community.

Ger Lynch Described as “remarkable generous and effective”, Ger has been nominated for his immense contributions to the local community.

Pat McSpadden Pat is a doer, a man who quietly goes about his business but has been instrumental in both the 1916 and 1918 memorials through his Leadership of the Historical Society.

Martin Meade Nominated for his work in rejuvenating the Former Convent and making it a fit for purpose modern day facility, revitalising the Community.

Patrick Moore Chairperson of Youth Work Ireland and in spite of ill health has persevered with his voluntary work both at a local and national level.

Joe Oakley has been volunteering with the Vicarstown and Stradbally Community for 35 years and retirement hasn’t slowed him down.  His involvement with the GAA, the Youth Club and the Community Games has created a legacy for young people in the area.

Sharon Preston has long served as a volunteer with the Rose of Tralee and the Arch Club.

Liam Wall has made an overwhelming contribution to the local community of Ratheniska and is deserving of recognition for his work.

The award was presented with the award at a gala reception in the Midlands Park Hotel on Friday, October 17.

This is the 10th year of the awards which were hosted by Laois County Council in association with Laois Public Participation Network and sponsored by People First Credit Union.

The Leinster Express is honoured to be the media partner.