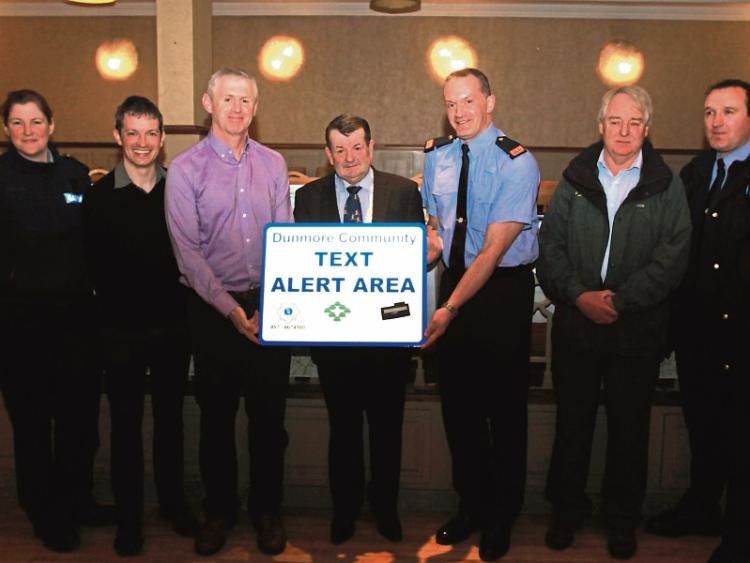 With criminal activity and burglary of private houses at an all-time high, a group of concerned people in the Dunmore catchment area contacted Muintir Na Tire about “Text Alert” and following a meeting with Conor O’Leary of Muintir Na Tire a committee was formed to get the Text Alert up and running.

The first committee was Oliver Clooney, chairman, Gabrielle Irwin, Secretary and Alan Gee Treasurer. Their task was to decide on the catchment area and then approach everyone in that area to seek their help, support and approval for the scheme to go ahead. Community “Text Alert” was up and running in a short time.

At the AGM in 2014, it was decided to embark on a feasibility study to look at erecting CCTV cameras in the Dunmore Community Alert area. This process was very slow and only for the great work and persistence of the committee, it would have failed.

A pilot scheme was granted by Alan Kelly, Minister of the Environment. At the Ploughing Championships in Ratheniska, the Minister announced that a grant of €50,000 was allocated to erect CCTV cameras.

This money had to be matched by the committee. With the support of the community and many fundraising projects, the money was raised and the green light was granted that the cameras could be erected.

The grant was given to Laois County Council and was given to Dunmore Community Alert when all work was done to the satisfaction of the Council. This project would not have happened without the great work and support of John Whelan, Laois IFA (Pat Hennessey and Ger Bergin), Kieran Kehoe, LCC, Chief Supt John Scanlon, Tom Dillon and the trojan work done by the committee.

In 2016 the cameras were installed and officially commissioned by Alan Kelly.

The erection of CCTV cameras in the Dunmore catchment area has made the lives of everyone a lot more pleasant and they can sleep at night happily knowing that the cameras are looking out for them. The crime rate is now practically zero.

The cameras have also helped the Gardaí in solving many other crimes committed elsewhere. Dunmore Community Alert was the first area with CCTV cameras erected in the county and since 2016 another 13 schemes have CCTV in their area.

Laois County Council has recently undertaken the role of data control for all 14 schemes and now a Federation of CCTV schemes has been set up. Dunmore Community Alert has three Data Processors.

The cost of maintaining and upgrading the cameras is expensive and fundraising is essential to have enough funds to keep the cameras in operation. The co-operation of the residents who pay an annual subscription and their support to fundraise is most appreciated.

On Saturday, February 29 Dunmore Community will showcase all that’s good in the area in the Castle Arms Hotel Durrow starting at 3pm. The results of the children’s art competition will be the first on the programme at 3 pm followed by a Clown and Magic show with face painting. A cookery demonstration from Castlewood Organic farm is next, Fashion Show by Fifty Seven Boutique, Floral Demonstration by Oliver Lawlor, First Aid and CPR from Durrow Fire and Rescue Service.

The raffle and door prizes will be next and the best wine till last a Coral Recital by Vocem Daru. A great variety to suit everyone, all welcome.