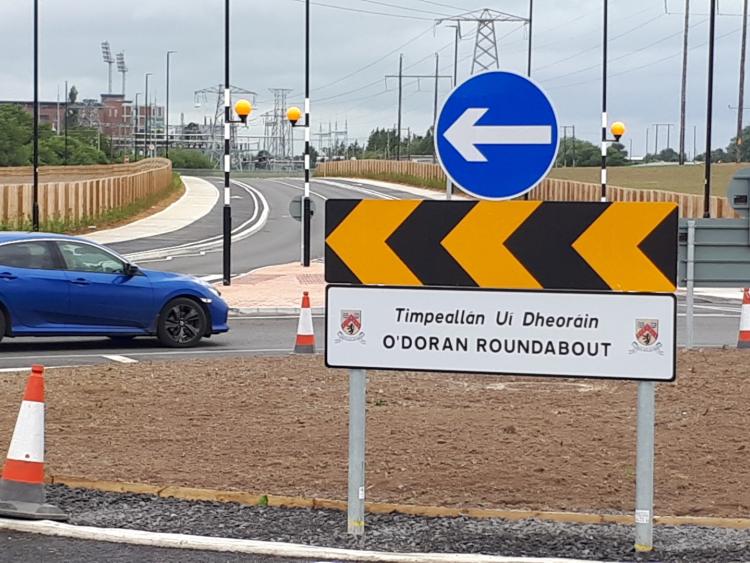 O'Doran roundabout in Portlaoise named after a local family

County Hall has no policy that allows for the naming of infrastructure, monuments or plaques it was claimed at a recent municipal district meeting.

While a new roundabout in Portlaoise was recently named O’Doran Roundabout, councillors were told that no naming policy exists. The roundabout is located on the Timahoe Road and is part of the new link road.

“There is currently no policy on the naming of infrastructure and the installation of commemorative monuments or plaques,” Mr Aidan Barrett, Senior Engineer, told the Portarlington Graiguecullen Municipal District meeting.

“It is proposed that such a policy will be brought before the next Roads and Environment Strategic Policy Committee for approval before bringing it to the full Council for adoption. This request can be revisited once a policy has been established,” said Mr Barrett’s written reply.

Cllr Ben Brennan wants the Northern Relief Road in Graiguecullen to be named after Fr John Fingleton. He was not satisfied with this response.

“You didn’t need the policy to put a name on a new bridge. When I ask this simple question I think I am being fobbed off. They have already named the bridge in Graiguecullen without a policy,” he said.

Cllr Ben Brennan wants new extension of the Northern Relief Road on the Carlow Laois border to be named after Fr Fingleton who was a former Parish Priest of Graiguecullen Killeshin. He was among those who campaigned for the new road.

Cllr Tom Mulhall said there is a place names committee which should have an input.

It is understood that the O'Doran roundabout in Portlaoise may have been named after a Portlaoise business family whow owned what is now Ramsbottom's pub and the adjoining Co Hotel (currently derelict).

Doran's Hill is located beside the New Road and was mined out for sand. The site is not the home of the Portlaoise retail park

A member of the family was to the fore in agitation during Land League days.

Laois County Council has not explained how the new Portlaoise roundabout came to be named after the O'Doran family.