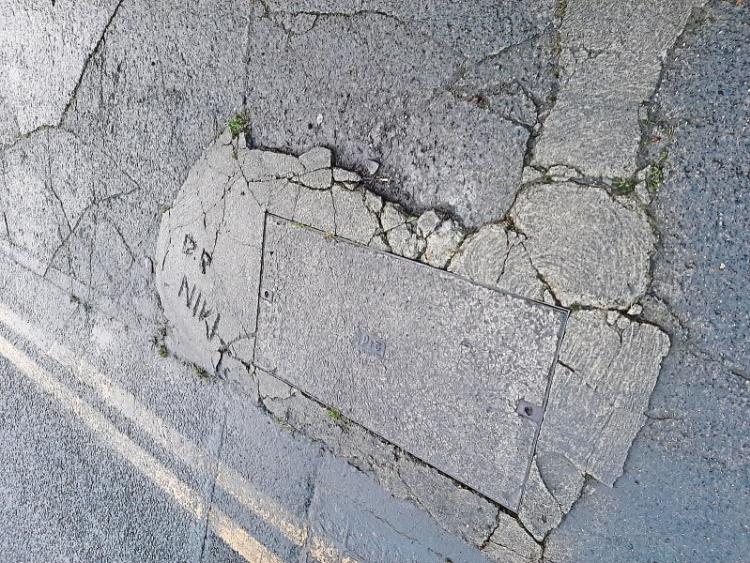 The biggest telecommunications company in Ireland Eir left many damaged road and footpath covers in a state of disrepair in Portarlington last year and declined to engage with Laois County Council, despite acknowledging repairs were needed.

The situation was highlighted recently when Cllr Aidan Mullins called on Laois County Council to engage with Eir to repair damaged and unsafe manhole covers on footpaths and roads around Portarlington and other areas of the county.

Philip McVeigh, Senior Executive Engineer, replied in writing about what the council has tried to do to get the firm to act.

“Laois County Council has attempted to engage with Eir on several occasions over the last year. A meeting with eir was held in Portarlington at the beginning of March this year to identify the defects.

“We have since received no schedule or programme of works from eir to repair the defects that were identified,” he said.

Mr McVeigh gave more details about what progress had been made last March. He said an eir supervisor was given evidence following a council survey of 22 eir street covers.

“We had photographs and co-ordinates of every hazard,” he told the Portarlington Graiguecullen Municipal District meeting.

Cllr Mullins was annoyed with eir adding that if there are 22 in Portarlington there could be 100 damaged covers around the county.

“Somebody didn’t do their job,” he told the meeting.

“I think this is absolutely disgraceful,” he said comparing the company to the ESBs delays in completing work in Portarlington. Eir, many months later have not come back following a meeting with the local authority about serious safety issues,” he said.

He said he himself is aware of several damaged manholes in the town. “All are serious safety hazards,” said the Sinn Féin Councillor.

Cllr Mullins said big chunks of concrete have broken away from the surrounds of the covers on paths. He believed the council must be more forceful with the firm.

“To think they are refusing to take action here. I just don’t get their attitude. We should have been hammering them long before this. We are walking away saying it is their problem. I don’t think we should let them off the hook on this,” he said.

He questioned why Eir management was as he put it ‘turning a blind eye to it’.

“I don’t get the mentality. They are not accountable to anybody,” he said.

“I just want to get someone in the council to write to their counterpart in eir above the level of the person who met them in March. There is no point in going back to that well. We need to go above that level and get them to act,” he demanded.

The Leinster Express contacted the company which was formerly in State ownership.

Eir committed to a new meeting with Laois County Council officials with a view to carrying out the repairs highlighted in Portarlington.

The company issued a statement in response to a number of queries.

“The infrastructure in question has been surveyed by the open eir team and a meeting has been arranged with the Council Engineer to agree on a programme of works,” said a spokesperson.

The company declined to say when the infrastructure was surveyed and what eir has found and needs to be addressed.

It did not say when the meeting will take place with the council.