‘Come out and fight me baldy’: TikTok fame for Midlands teen 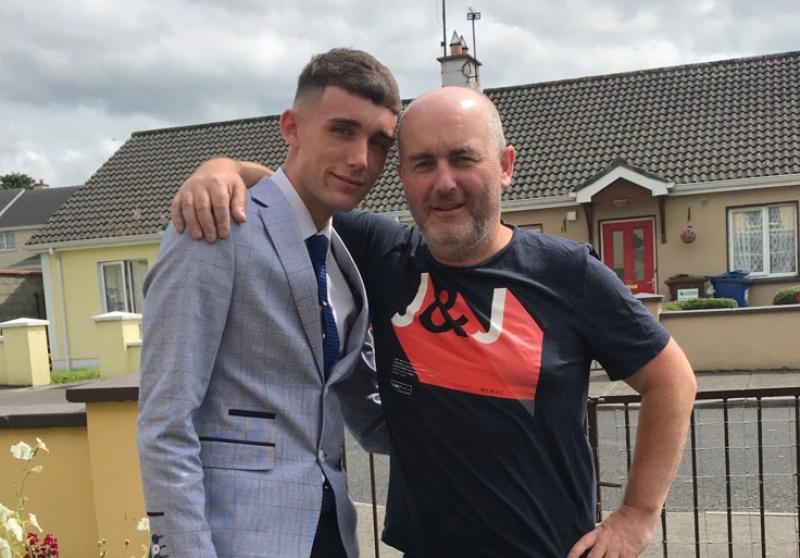 Adam Kelly, whose TikTok account has shot to fame thanks to the hilarious comedy sketches and pranks he posts on a regular basis. He is pictured here with his dad, Cathal Kelly

If there’s one social media platform that has really made an impact during the pandemic, it’s TikTok. The video app’s user numbers skyrocketed last year as Covid-19 put the entire globe on lockdown and the digital world has been introduced to a whole new wave of content creators as a result.

One of those is 19-year-old Adam Kelly from Edgeworthstown, Co Longford, whose account, @2biglugs, has over 320,000 followers, more than five million likes, with hundreds of thousands of views on every video and millions on some.

“The content I create is comedy and pranks. I love doing sketches or annoying my parents with pranks. There’s very little of the old Irish comedy anymore and that’s what I try to make without offending anyone,” Adam said.

“I started off creating content just for my friends to watch. I am a bit of a weirdo and absolutely love comedy so I would post videos for them to watch and laugh at and as time went on people started enjoying it so I kept posting comedy videos and started getting my father involved because people could relate to an Irish father who fluently speaks in curse words.

“The channel grew rapidly and people really enjoy it and send me nice messages and stuff. I have always wanted to make people laugh so I really enjoy it.”

As well as comedy, Adam is big into sport and represented Longford in Gaelic, soccer, hurling and athletics at underage level. He still plays Gaelic for Edgeworthstown.

He also won an all-Ireland gold medal in a cross country relay with Cian McPhilips who he said is “smashing it” at a European level now.

But the local lad is “smashing it” himself in a different way as one of his recent TikToks received almost eight million views, shooting him to TikTok fame and putting him on the map.

“It’s weird because hat day I didn’t really have any ideas for a TikTok,” said Adam.

“I am a big fan of Jerry Lewis, the American comedian and he does a boxing skit and a few years ago I was doing the skit around my sitting room and my family were dying laughing at it so anyone that came into the house my mother would make me do it. Just jumping around like a skinny lunatic in a boxing match.

“So, I used it for TikTok and called my father baldy and was calling him out to fight and people really enjoyed it. I couldn’t believe how well it did it was getting shared onto different pages and even James Arthur shared it.”

The video also showed Adam’s mother, Majella, running in to beat him with a wooden spoon, bringing even more of that Irish humour to the post.

“It has nearly eight million views and 1.3 million likes. Any video I posted after it with the same type of content was getting over a million views consistently and my following went from 70,000 to 300,000 in two weeks,” said Adam.

His family are very supportive of his TikTok antics - even his father, Cathal, who has been given the nickname, ‘baldy’.

“My family are really supportive about it all. It took a while for my father to get used to because I started annoying him when I had a couple of hundred followers but he was always a good sport and even though I’m always annoying him, he secretly loves the attention.

“People think I’m quite harsh but he’s always good about it - he gets thick for about a minute then he will laugh about it for the rest of the night and my mother really enjoys seeing my father in pain so she loves it.

“My sister is my camera woman and she’s bold anyways so she’s always up for a bit of craic. My mother used to call me Walter Mitty for being deluded thinking I’d be able to make a living out of this stuff but even though I’m earning no money at the moment I can see she’s changing her mind about it.

“My father realized we were doing well when people started saying it to him down the town. Overall they are amazing when it comes to it and to be fair we are a very close family more like best friends so it’s all a bit of fun.”

Adam feels extremely lucky to have a strong relationship with his family, especially in lockdown when households are stuck at home together. And the TikTok community at large have developed a soft spot for the family as people continue to watch and enjoy the videos.

“I get lovely messages from nurses who are working hard saying the videos make the long days feel a little shorter and the same with people who are really struggling mentally through Covid or those who may have lost loved ones saying the videos are helping,” said Adam.

“I got messages from those who have Covid saying they aren’t able to go anywhere but the videos are keeping them entertained. To me that’s better than anything - to know it’s helping people that are suffering is the greatest feeling in the world. I don’t get paid a cent and comments like that keep me going. It’s such a nice feeling.

“A few people have called up to the house with their kids to say hello and it’s very nice to see some of the reactions. I’m not really used to it because I only got a following during Covid so I don’t see people that much but people will stop me and say nice things when I’m in town and children will come up and be jumping around saying c’mout and fight me baldy - it’s a really weird but nice feeling.

“I get videos from parents of their children bouncing around doing the video it does be so funny to watch. From children as young as two to adults up to 60 I just find it really funny.”

While Adam is currently studying Business and Law in AIT , he has no intention of giving up comedy and hopes to pursue it in the future.

“It’s not about the money but at the same time if I was making money from making people laugh it would be a dream. I am pretty sure Tiktok don’t pay so the plan will be to keep it up on TikTok and get more followers and then the bigger goal would be to see if it leads to any opportunities in the future,” he said.

“I had an interview for an RTE programme last August called wingman; somebody emailed me after seeing my TikTok but I didn’t get the part. And my family got interviewed for goggle-box but we didn’t get picked either.

“In fairness there have been people who have been trying to get me opportunities and I’m very grateful for them but as my mother said, just keep them going and hopefully someone picks me up.”