'The minute you pass, Graigue bridge, you are in Laois' - Carlow and Laois friction over houses in Graiguecullen 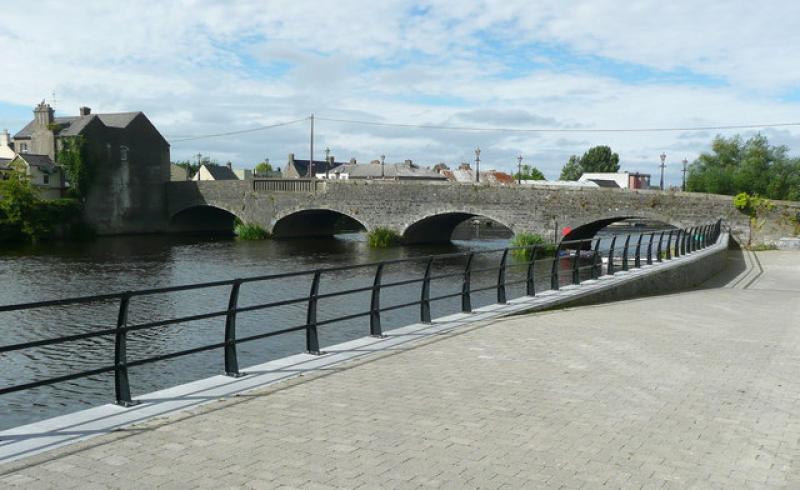 Proposals that Laois land in Graiguecullen should be handed over to Carlow for housing caused friction between public representatives from both sides of the border town where nearly 200 applicants are waiting for council homes.

Laois councillors insisted that Laois people must come first but Carlow councillors that any houses that would be built on Laois land would go to Graiguecullent residents who regard themselves as Laois in any case.

The issue was raised at a recent cross border meeting attended by councillors from both counties and officials in local authorities.

Carlow County Council’s Director of Services for Housing Michael Brennan told the meeting that 77 houses are being built under a joint two council project on the Ballickmoyler Road in Graigue by Cooperative Housing Ireland.

He said 20 of those houses have been allocated to Laois council applicants, the other 57 are still under construction, which consists of 44 three-bed and 13 two bed. It is hoped that people would move in in the Autumn.

He added Carlow is expecting a total of 234 social houses to be built in 2021. He added that there are 86 in the Graiguecullen part of Carlow waiting for a council home.

In response to Cllr Fergal Browne, co-chair, Mr Brennan said Carlow County Council does own any more greenfield land and will now have to rely on brownfield property for more public housing projects.

This led Carlow’s Cllr John Casin to call on his Laois colleagues to share land because he said there is not a big demand for social housing in Graigue.

“Has Laois any lands over there that they might be willing to offload so that we could build houses over in the Laois side of Graiguecullen to try and shrink our waiting list,” he said.

Cllr Cassin said Carlow was not trying to seize land but some sort of an agreement should be reached to develop Laois council land in Graigue which would benefit people who see themselves as being from Laois.

“There's not too many people in Graiguecullen whether they live in Carlow or the Laois side, that don't class themselves as Laois. While they might be technically in Carlow, people will tell you once you come over the bridge that this is Laois to them,” he said.

Laois Council’s Director of Services from Housing Joe Delaney clarified Cllr Cassin's claim that housing was not needed for people on the Laois side. He said up to 75 people have applied to be housed on the Laois side of the town.

“We do have need in Graiguecullen...We don’t have a significant landbank but we do have some land there. In terms of the Laois plan we certainly would have a need for more social housing,” he said.

“I can't understand how come we only got 20 of the 77 houses if there are still 75 people in the area on the Laois housing list. They didn’t appear in the last few days or months,” he said.

He demanded that any future housing plans Carlow has for Graiguecullen must involve agreement from Laois councillors and officials.

Carlow’s Cllr Ken Murnane claimed that it is well known that Laois oppose Carlow crossing the border to build.

“From the knowledge that I've been told. There were huge objections in Laois County Council regarding the development on the Ballickmoyler Road. While we appreciate all the development that Laois do in Graiguecullen, unfortunately, an awful lot of Carlow people want to live in Graiguecullen. I would be fearful of whatever land Laois get in Graiguecullen and they are totally against Carlow building in it and that's common knowledge,” he said.

He accused Laois of spinning and insisted that Laois people are being housed by Carlow.

“At the end of the day, it is not about Carlow, moving in on land in Laois, it is Carlow providing houses for Laois residents and for most people in Graiguecullen, whether you like it or not. The minute you pass, Graigue bridge, you are in Laois,” he said.

However, Cllr Aisling Moran of Laois said people living in her county must come first.

“We need to house people in Laois first and then if there are any extra houses, I would have no issue going to Carlow but I think we have quite a number of people looking for houses in Laois at the moment, she said.

Cllr Andrea Dalton of Carlow said she has helped people in Laois and councillors must serve the needs of people in Graiguecullen regardless.

“I've made representations for people, and they're on the Carlow housing list, but they live in Laois. I think there's that discrepancy that people who might live over the border need to put their names on the Carlow County Council list and vice versa,” she said.

“From my perspective here. I'm happy once people get homes. It doesn't matter if they are from Laois or Carlow. There’s a lot of people suffering and so it's good to see the developments,” she said.

She supported the idea of having two lists because of the cross-border nature. She also backed the idea of jointly developing on land the is currently owned by a vulture fund near Fruithill Manor.

Cllr Browne proposed the idea that Carlow County Council housing list for the Graiguecullen area would indicate if somebody wished to live on the Laois or Carlow part of the border town.