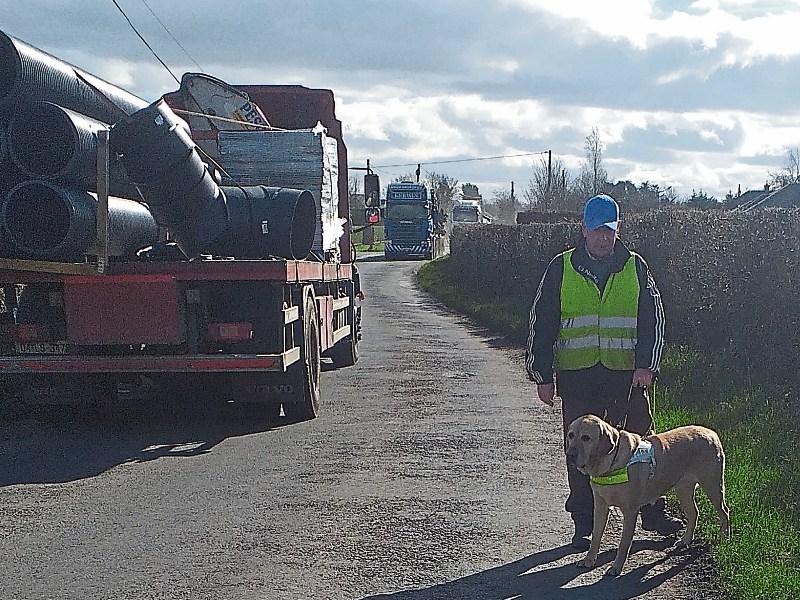 Left: Seán Byrne, who is visually impaired with his guidedog has to face heavy trucks on the road which is now getting a path

Public money can be saved if Laois County Council assigns more work to its workers rather than outsourcing most roadworks to the private sector, according to councillors.

The issue was debated in the context of work in Mountrath to make a road safe for residents. Cllr James Kelly praised the workers doing the work and officials for organising the project at Spa Hill and the Forest.

"The work has started and is going on very well. I just want to thank Simon Walton, Edmund, Will, the staff, the landowners and the residents and anybody that was connected with this and all the councillors who pushed for it," he said.

Cllr Kelly said the project is an example of what can be done when the council's only resources are deployed.

"Our own staff are doing this work, and it should be a template across the county. I know we need contractors but a lot of the jobs don't need them. My understanding is that there will be huge savings on this job because our staff are doing the work," he said.

Apart from saving money, he said jobs could be completed more rapidly than if private contractors are brought in.

The view was endorsed by Cllr John King who said work is underway in Rathdowey on a project but the council staff were not aware that it had been outsourced.

"All our staff are more than capable of doing the necessary works...I have seen the skill set of our own people. Any jobs should be done as a cost-saving," he said.