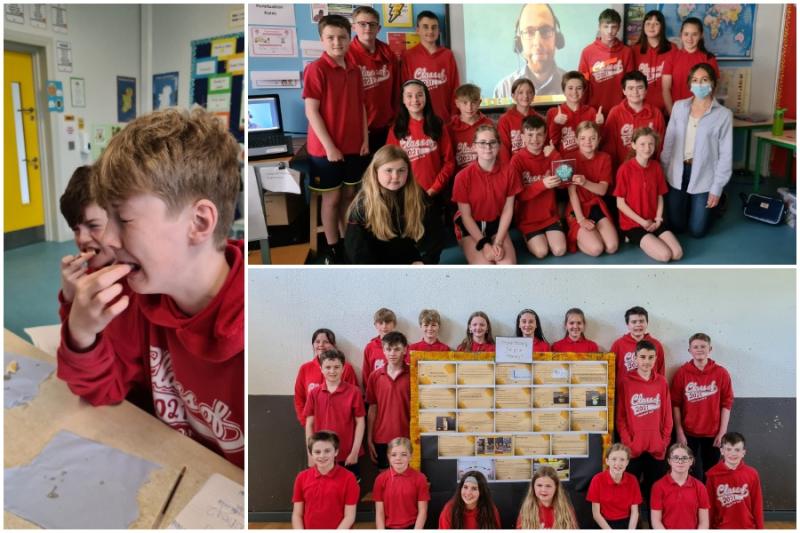 A brave young Laois lad had honey for breakfast, lunch and dinner recently, all in the name of science.

The results were interesting.

"After this impressive showing, Ruairi concluded that honey ‘might ease the symptoms but it is not a reliable cure’," his teacher said.

It was all part of a big scientific study by the school, who have a strong focus on science.

The children were taking part in Science Blast, a prestigious science competition run by the ESB which Timahoe has entered for the tenth year.

This year their entry was all about honey as the children investigated the science behind the making of honey alongside the consumer motivation for purchasing different brands.

‘More Honey for your Money?’ asked the question, do you get a better quality honey when spending more?

The children were inspired by the All Ireland Pollination Plan, the Netflix Documentary ‘Rotten’ and the theory that local honey could cure hay fever.

Research began as the students returned to school after Easter. Like everything this year, Science Blast had to go online but that didn’t quell the enthusiasm of the Timahoe science mad students who set about the task with the utmost diligence.

Intrigued by the fact that honey is the third most faked food in the world, Lucy McEvoy was determined to find out more.

Testing and tasting was carried out in the classroom as the children investigated the properties of some supermarket honeys and some local Irish honey from Meath, Ballacolla and Ballyadams.

The local honeys won out on the tasting test, though Andy Keane wasn’t thrilled by the floral taste of one.

Next up was the ‘Water Test’ and the ‘Flame test’. All honeys tested appeared to be ‘pure’ though Áine Farmer reminded everyone that it would be difficult to know for sure without testing in a lab.

Following their thorough investigations, the children surveyed parents on their consumer choices with all parents being shocked at the value of the honey industry- over $9billion US dollars.

The data was gathered and the students got to work putting their findings together using Google slides. The project was then shared with and presented to an ESB Science Blast Judge. Pfizer Scientist Ciarán MCGinn visited the students virtually via Zoom, quizzing the students before returning 4 days later with his feedback.

He awarded the students with a plaque citing their depth of scientific research to be excellent and their presentation skills above their years.

Grainne Buggy explained that while she “didn’t get to experience the nerves and ‘buzz’ of the RDS” this year, she “loved bringing the science fair into our classroom”.

"I was delighted with a very positive experience for the children as we approach the end of the school year. I felt the children would benefit from experiencing the scientific process in a meaningful way and I hope they would use this experience throughout their time in secondary school”.

"I am thrilled for the tradition of Science exhibitions to be maintained in what has been a very challenging school year”.

Following their research, the children’s advice is to buy your honey direct from your local beekeeper or farmers market rather than the supermarket honeys which are often a blend of honey from hives across the world. In buying local, you are supporting the bees that pollinate our crops, plants and flowers.

They were awarded a plaque for their extraordinary scientific knowledge, remarkable presenting skills and their dazzling
display.