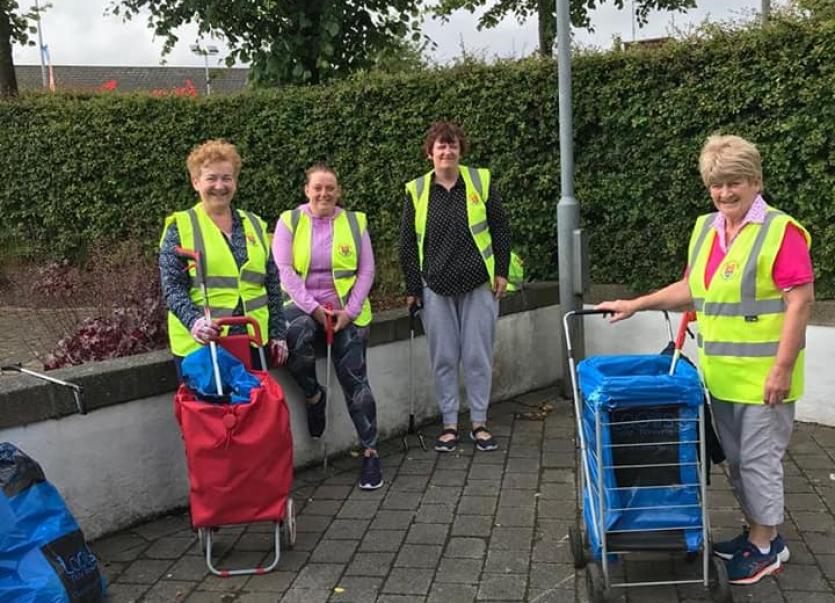 All Laois Tidy Towns committees and volunteers have been warmly praised by councillors, but with calls for more monetary support from Laois County Council.

Meanwhile the national judging will soon get underway, with extra prizes and assurance the judges will take it easy given the Covid pandemic restrictions.

Some Tidy Towns volunteers don’t even have the money “for a bottle of water” after a morning’s work cleaning up other people’s litter, says Cllr Ollie Clooney from Durrow.

“They need more support. Laois litter is a huge issue. Everyone talks about it but the Tidy Towns is the only ones on the ground doing anything about it,” he claimed.

Cllr Noel Tuohy led the chorus of praise when he tabled a motion to the June council meeting to give a special thanks to all Tidy Towns groups.

“Portlaoise is looking great, and as we head into the holiday season, and hopefully our families abroad come back, it’s great to have it looking so well. They get on and do the work and you hardly notice them. It’s nice to be told that.”

“Tidy Towns are doing a great job, the amount of painting that’s going on, chairs benches, ESB boxes and they also pick up our litter. I see them out the whole time doing litter picks. There’s new people on board as well. They involved the CBS with painting the library partition, its all great work," she said.

Cllr James Kelly hopes judges will be understanding of Tidy Towns committees who are not too tech savvy.

“It’s like a virtual judging. Some of the committees are IT savvy and they’ll have drones going around and will be sending in their videos. Others will be sending in photographs so I would hope that the judges would be fair to everybody,” he said.

He also wants businesses to take up the grant to improve their business facades.

Cllr King praised the council for getting schoolchildren involved this year.

“It’s nice to see small boys and girls out in high vis’s litter picking. If you start them off young they’ve a tendency to stay at this type of work. Anyone that gives up their time for hours on a Saturday morning, has to be commended. We as a council should showcase them,” he said.

“The support we get from Laois County Council is unbelievable and it is appreciated by the people on the streets. Well done to all the Tidy Towns,” he said.

“Most communities in Laois have a very good Tidy Towns with the representatives and staff of Laois County Council. It is one of the great efforts of working in partnership with the community. I personally would like to thank everyone of them, who go out and pick up litter and do everything possible to improve their own area and our county,” she said.

Entries closed for this year’s national Tidy Towns competition on July 2. The organisers say there will be “no negative marking” this year because they understand that people had to stay indoors.

“Please do not be discouraged if the level of work is not what you would like it to be, how could it be? You were following the rules by staying at home,” they say.

This year also includes a €5,000 Covid-19 Community Award for communities who show how they stayed connected and positive during the pandemic.