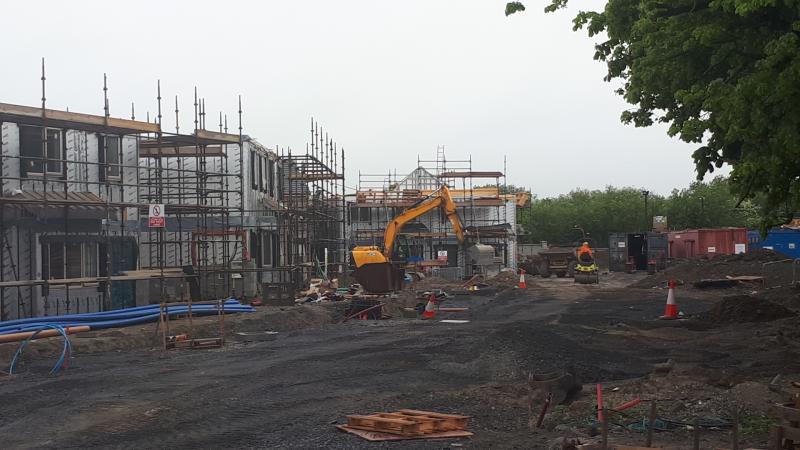 Construction on the Borris Road Portlaoise in 2020

Portlaoise’s growth is set to be revised upwards at the expense of Portarlington and other Laois towns, following a recommendation from the country’s planning regulator.

Laois County Council has altered its draft County Development Plan 2021-27 in line with a recommendation from the Office of the Planning Regulator to rebalance the overall allocation of population growth and housing supply targets. The regulator wanted the plan changed to achieve a more sustainable distribution of growth and which it says prevents lower tier settlements growing at faster rates than the tier 1 key towns.

The regulator told the council that Portlaoise's growth should be revised upwards while growth plans should be reduced in Portarlington, Abbeyleix, Stradbally, Ballylinan and Ballyroan.

In response, County Hall amended its Core Strategy population for Portlaoise and increased to 20% growth of the 2016 Census data for that town or an allocation of 43% of the total population of Laois.

Portarlington and Graiguecullen have been revised down to grow by 15% each. The smaller towns listed will also get a smaller percentage growth.

Senior Planner Angela McEvoy told councillors at a meeting that the decision is commensurate with the infrastructure in the various towns.

She added that the rate of real growth in Portarlington and Graiguecullen would increase when Carlow and Offaly increase is factored into the joint local authority plans for those towns.

By contrast, the population of Portarlington will grow to 7,596 requiring 400 new homes. A so-called self-sustaining growth town, Portarlington's population in 2016 was 6,596.

Cllr Paddy Bracken questioned the impact and wondered if the changes would be to the detriment of towns like Port and Mountmellick.

“I’m not against the development in Portlaoise but the smaller towns are going to lose out in terms of basic infrastructure,” he said.

Joe Delaney, Director of Services, said next year’s Census may allow the council to review and alter the plan to refocus on smaller towns.