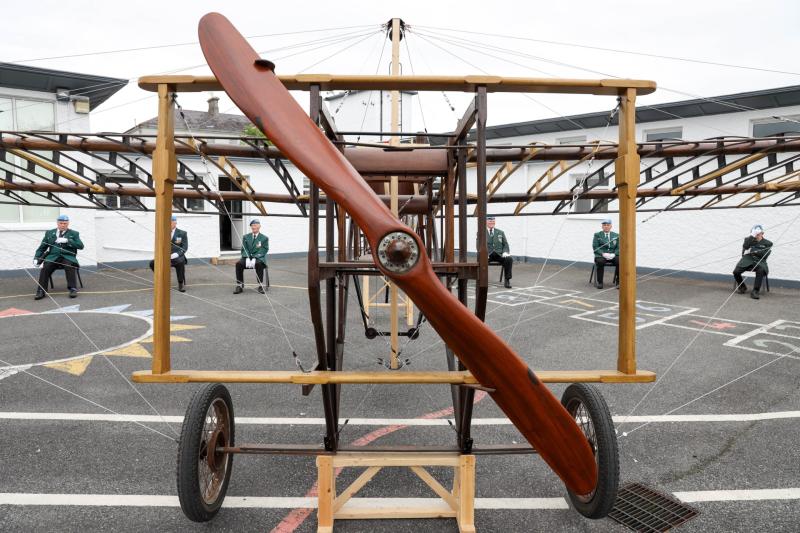 The plane last seen in public in Portlaoise over 100 years ago, when it was one of the first planes in ireland to take to the skies, returned home to Portlaoise on Sunday.

A huge gathering of well-wishers, heritage and aviation enthusiasts gathered in the spacious grounds of Laois Music Centre to view the newly restored plane, to hear the story of its journey so far and to hear music composed in honour of Portlaoise’s other great aviation hero, Col. James Fitzmaurice.

Addressing the gathering, Cllr Conor Bergin Cathaoirleach of Laois County Council said: “The Plane was designed and built in Aldritt’s Garage Portlaoise by Frank Aldritt and his sons with the help of master carpenter John Conroy – the first plane to be built and take to the air in what is now the Republic of Ireland –and here today we celebrate the vision, creativity, imagination and originality of those Portlaoise men of the past. But it’s also important for us to celebrate the achievement of the people who have rescued this priceless artefact from obscurity.” more below picture. 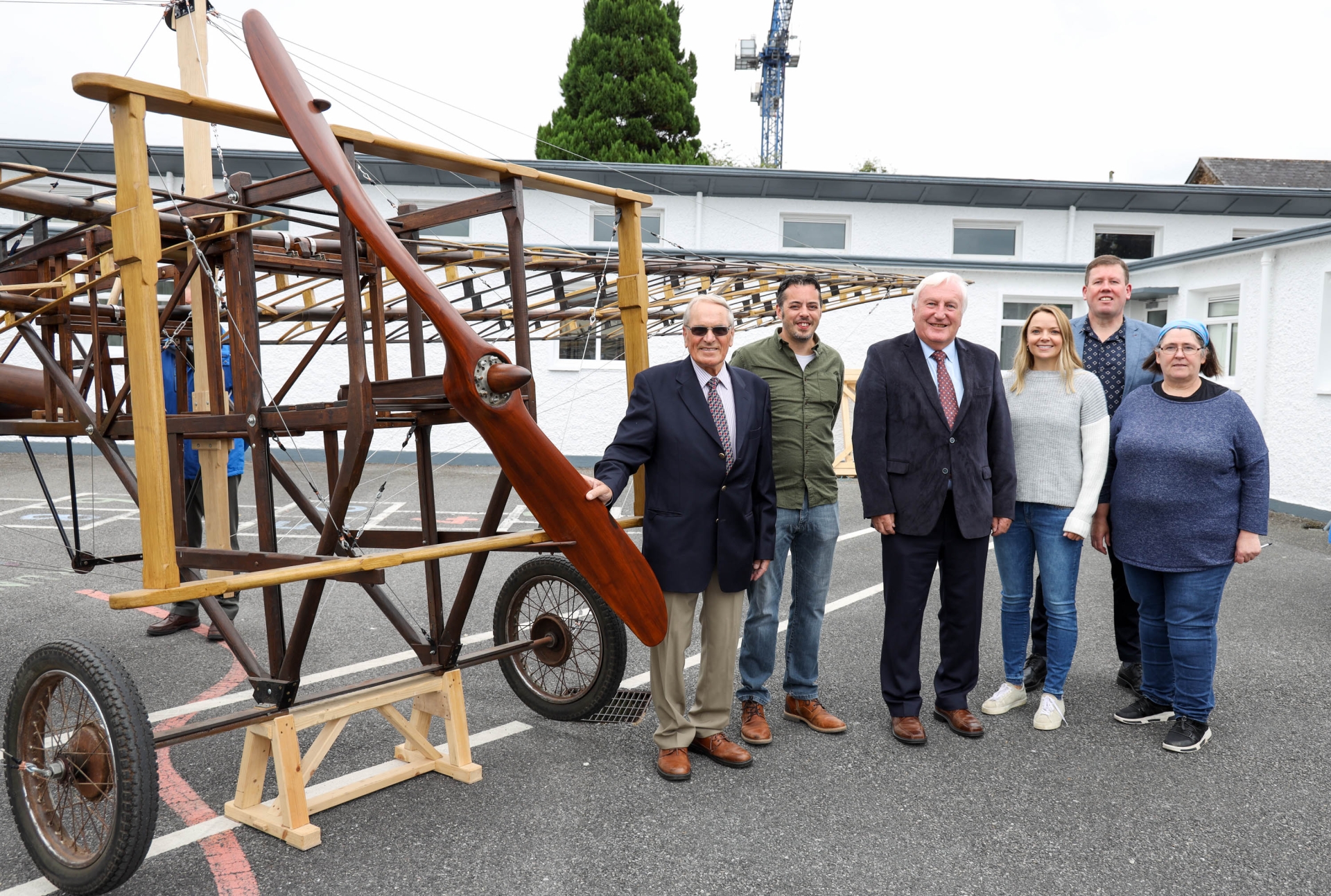 The Cathaoirleach continued: "We must remember Joe Rogers, who first highlighted the continued existence of the plane in a private collection in England; Teddy Fennelly and Alan Phelan who pursued the plane and persuaded the owner to part with it and allow it to return home; Brendan O’Donoghue and Johnny Molloy who painstakingly worked on the craft to restore it to its shining glory and Tim Costelloe who informed and inspired all those involved from the start of the project, sharing his knowledge and enthusiasm for all aspects of Irish aviation and in particular in designing the replica engine we see on display here today with the plane.”

As well as being a valuable artefact on its own right, the Portlaoise Plane is linked to Portlaoise’s other major aviation story: A young James Fitzmaurice records in his memoirs that he witnessed the construction of the plane and was also present when it made its first short experimental flight.

This early exposure to the excitement of flight was credited by Fitzmaurice with inspiring him in his career as a pioneering aviator. This links the Portlaoise Plane directly with the first east-west transatlantic flight – elevating the story and confirming the place of Portlaoise as the centre of Irish aviation history. More below picture. 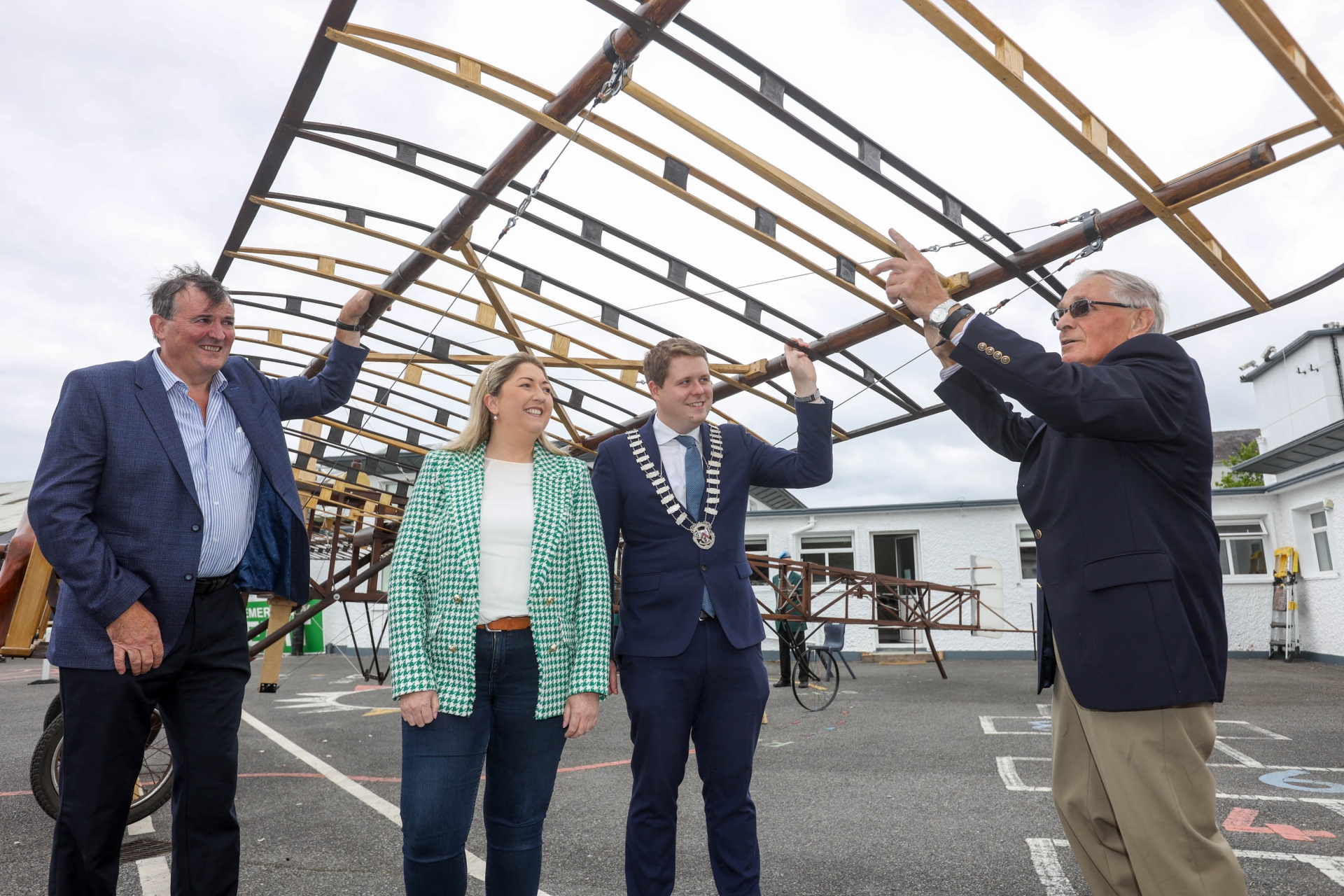 Chairman of the Heritage Council Michael Parsons also spoke at the event on Sunday.

“The Heritage Council encourages national and local exploration and appreciation of Ireland’s rich natural, built and cultural heritage. The Portlaoise Plane tells a story of exploration, bravery and derring do, that should make the Aldritt, Conroy and Rogers families very proud of their ancestors.

"All of us in Laois and Ireland can join in celebrating this great story of these pioneers of Irish Aviation. The Heritage Council commends Laois County Council for its warm support of the Portlaoise Plane. I personally wish that the plane will soon be on permanent display where it belongs – here in Portlaoise,” he said. MORE BELOW PICTURE. 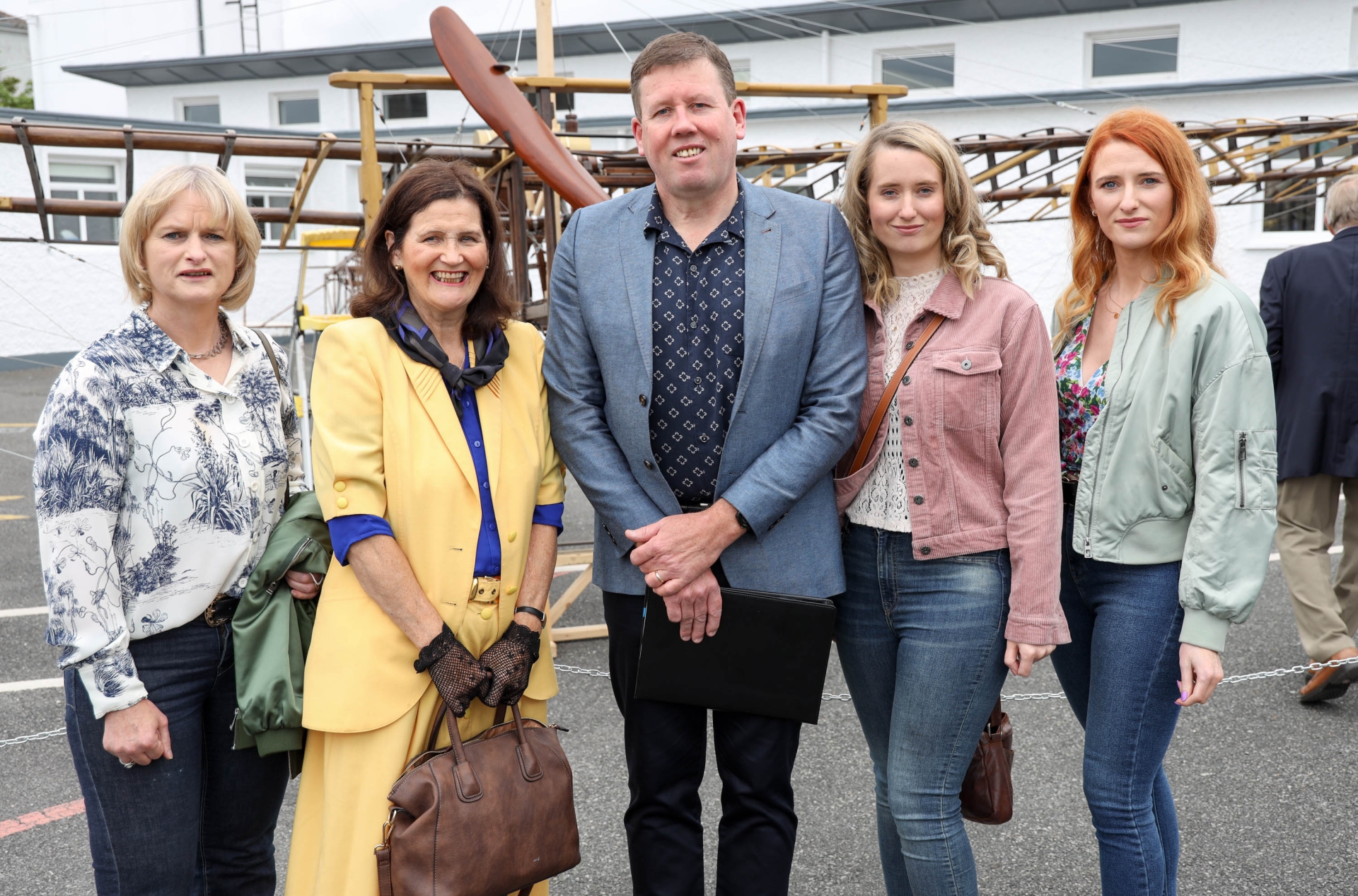 All speakers paid tribute to Teddy Fennelly, aviation enthusiast and author of the book “Fitz and the Famous Flight.

“Teddy has rescued both the aviation story and the plane for the people of Portlaoise. He has motivated everyone with his selfless drive and enthusiasm and we all owe him a debt of gratitude for saving and helping to restore this vital part of our heritage.”

Speaking about the Plane and its restoration, Teddy Fennelly thanked the many people who had helped along the way, mentioning in particular the staff of Laois County Council’s Portlaoise MD, who have generously assisted with the safe storage of the plane in Portlaoise for the past number of months.

He also paid tribute to the Management and Elected Members of Laois County Council who he said had always supported heritage projects in Laois and had been generous in their support of this project to date.

The Portlaoise Plane event was bookended by the performance of extracts from “The Impossible Dream” composed by Martin Tourish to commemorate the life and achievements of Col James Fitzmaurice. MORE BELOW PICTURE. 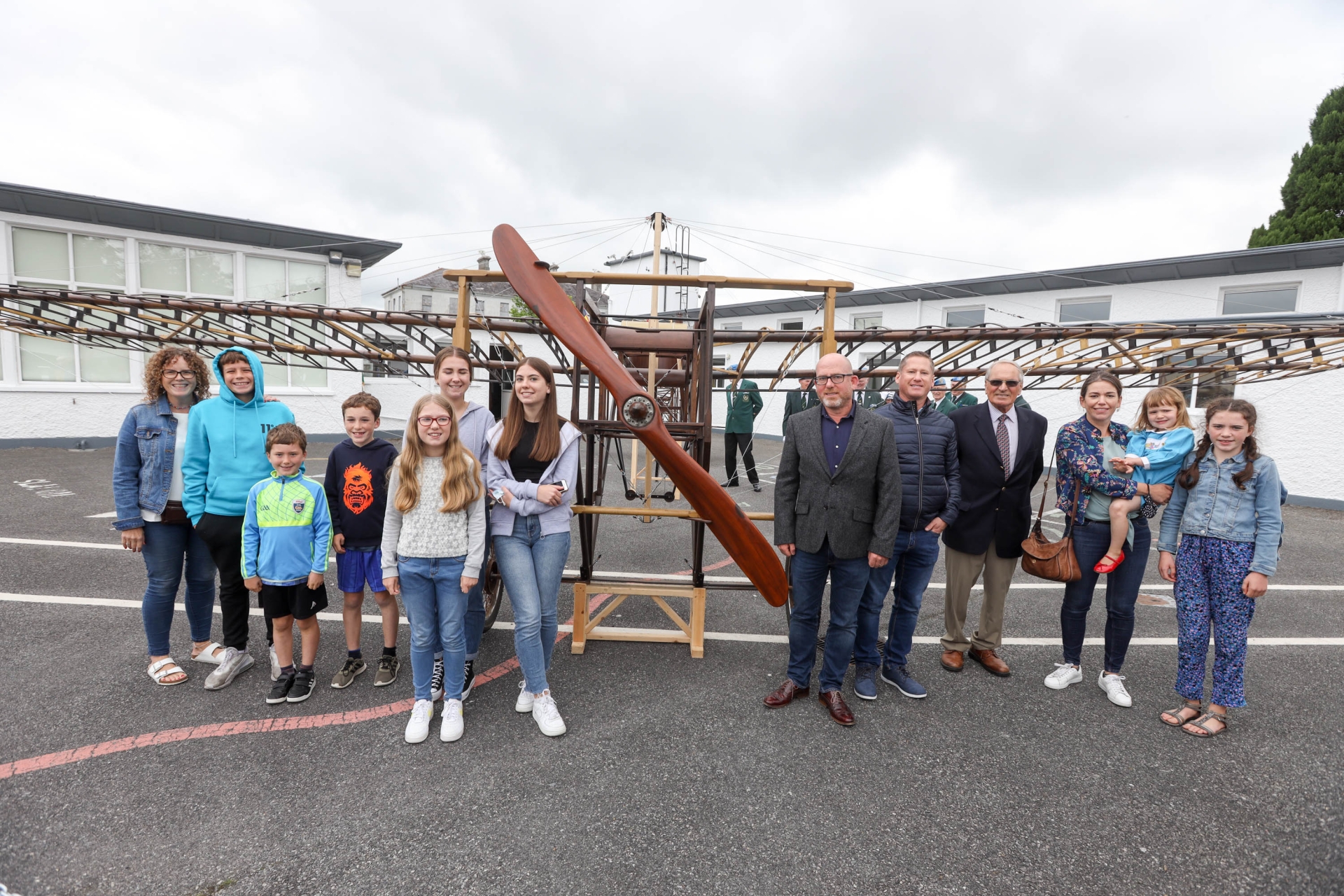 MC of the event Alan Phelan commended the young musicians and their tutors, paying special tribute to Rosa Flannery, coordinator of Music Generation Laois and the driving force behind many unique creative projects in the county.

At the end of the event, Alan asked Brendan O’ Donohue who spearheaded the restoration of the plane, and Tim Costelloe who carried out much of the research including the design of the replica engine also on display with the plane, to stand, and those gathered showed their appreciation of the two men with hearty applause. MORE BELOW PICTURE 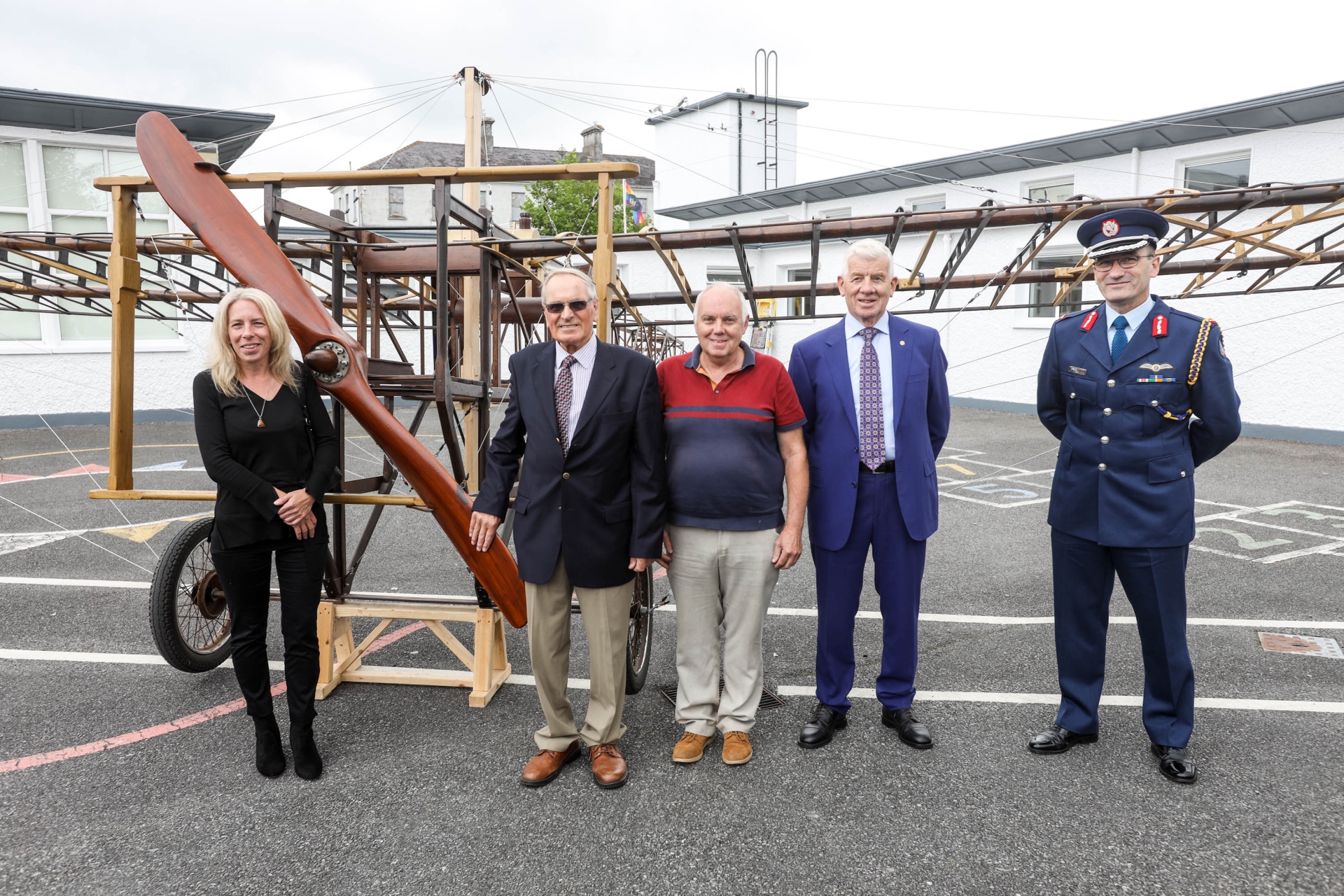 The event was attended by representatives of the Irish Air Corps who paraded on at the start of proceedings and by members of the Irish United Nations Veterans Association Post 27 Portlaoise Branch, who provided a special guard of honour for the plane while it was in situ.

General Officer in Command of the Irish Air Corps Brigadier General Rory O’Connor was an honoured and welcome guest. A fly-past of light aircraft from the Lime Tree Airfield just outside Portlaoise lent a further special aviation flavour to the historic event. MORE BELOW PICTURE. 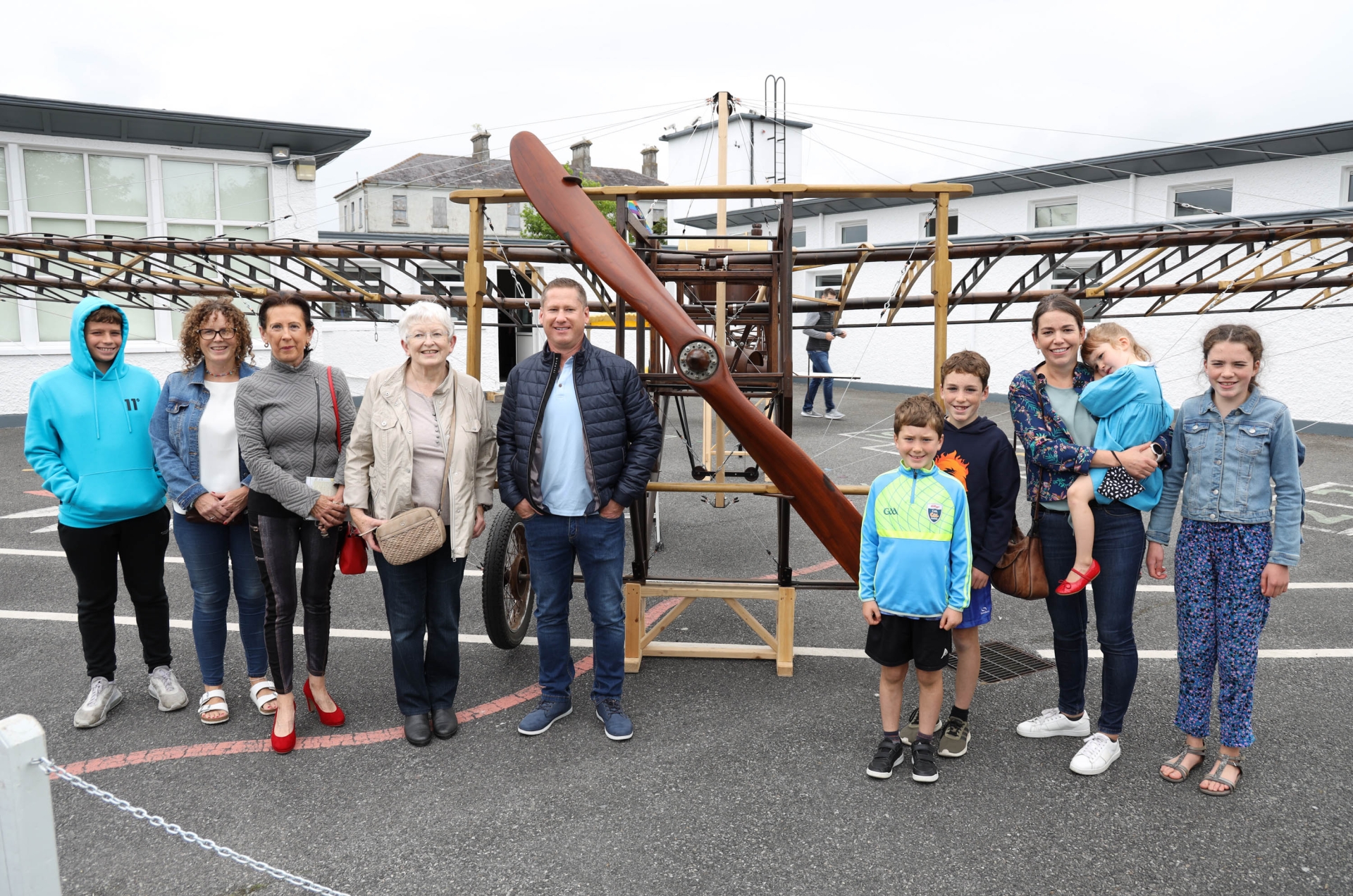 Col Fitzmaurice Archive
In addition to restoring the Portlaoise Plane, Teddy Fennelly has been collecting original archive material relating to the flight and Fitzmaurice for many years - the first East West Transatlantic Flight was major international news both in Europe and the US, and was front page news on the New York Times for 19 days after the flight.

Now, with thanks to Heritage Council funding, much of the collection has now been conserved by specialist paper conservator and digitised, and the and the Fitzmaurice Commemoration Committee has ensured that the newspapers will be made publicly available through the digital archive of the Laois County Library Service.

The archive project was brought about through the collaborative approach of the Laois County Council Culture Team – the piece of music commemorating James Fitzmaurice is another –showcasing how the culture Team members from the Heritage, Libraries, Arts, Music Generation and Archives work together through the Creative Ireland programme, to become more than the sum of their parts, and producing truly imaginative, ground breaking work.

The work of the group continues and more on the projects and plans of the Committee can be found at https://www.facebook.com/ Fitzflight.

More on the Portlaoise Plane Restoration Project is at https://portlaoiseplane.com/ 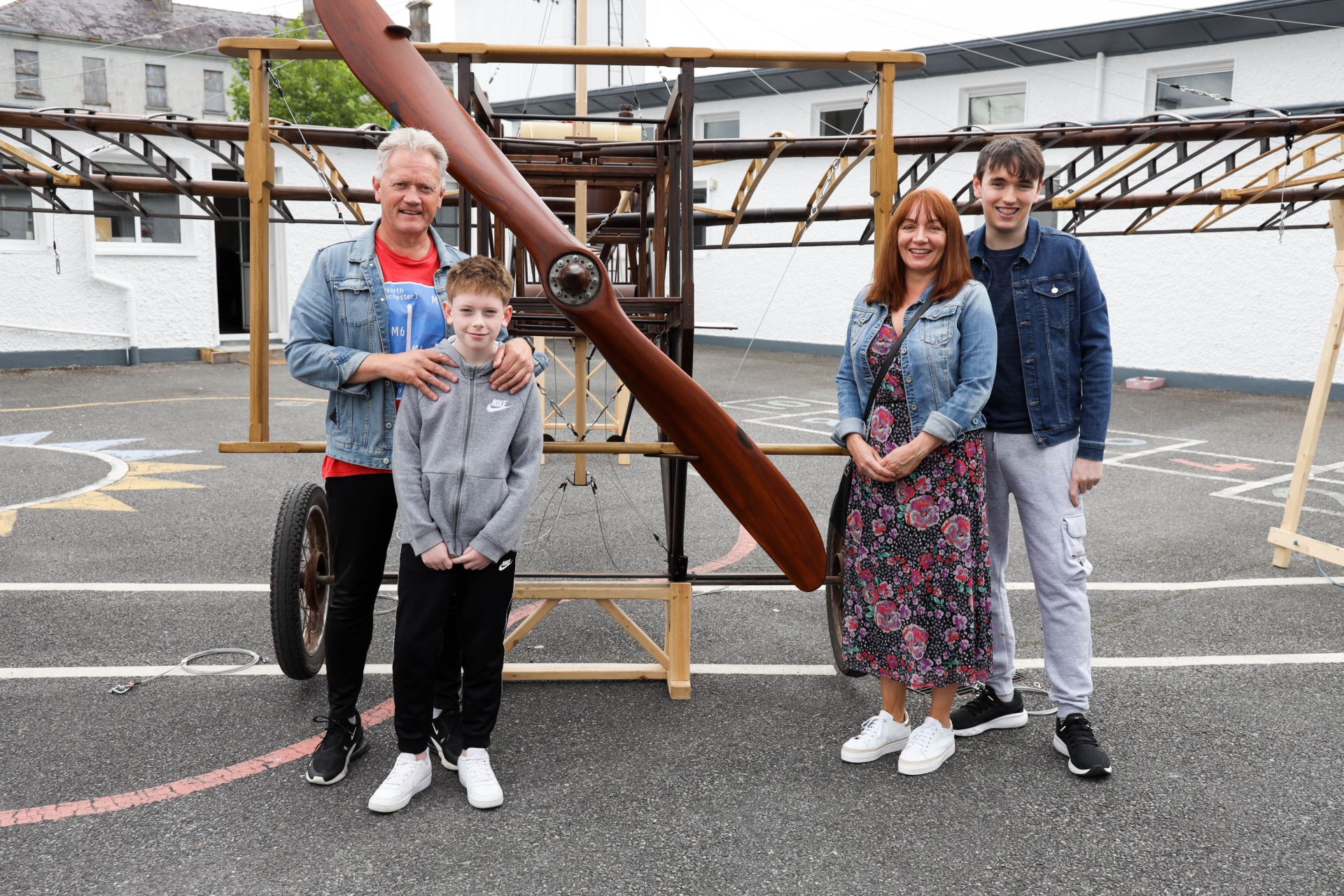