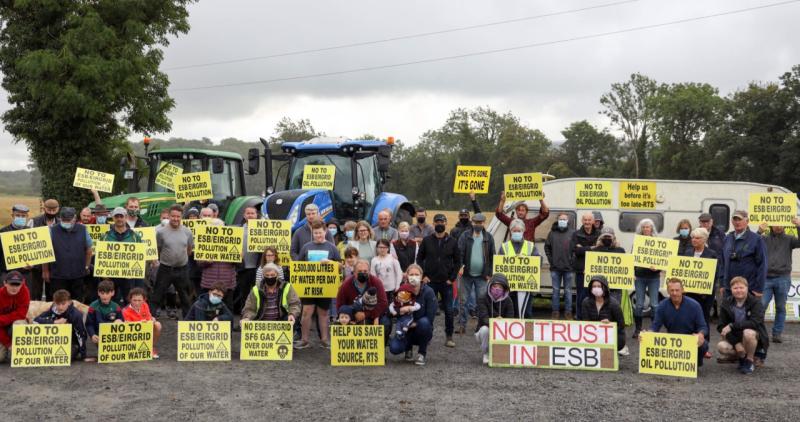 Laois residents faced with the construction of a big electricity facility on their doorstep have demanded a withdrawal of the plans.

The Ratheniska Spink Timahoe (RTS) Action Group also called on the State owned Eirgrid and ESB to apologise for how they have gone about trying to build the substation which is part of a €100 million project.

However, the ESB and Eirgrid did not issue an apology nor do they intend to withdraw as demanded.

The RTS group issued a statement after mounting a protest at the site in Coolnabacky which is close to the location where the National Ploughing Championships will be held.

“Our community in Ratheniska cannot believe in this day and age that semi-state companies can treat communities with such utter contempt and disregard to their water supply, environment and landscape.

“The community call on both companies to apologise for their behaviour, most recently for threatening our community with legal threats whilst asking us to consider entering a meditation process,” they said.

RTS also say they want Eirgrid and ESB to acknowledge that agreements they made in Dáil Éireann with the community and TDs Charlie Flanagan, Seán Fleming and Brian Stanley have not been honoured including their commitment to share all future plans of this proposed piece of electrical infrastructure.

“After almost 800 days of peaceful protest and 12 years, the local community in Ratheniska, led by the local farmers who are hosting this year’s ploughing championship, have shown their commitment to protecting their water supply, our environment and landscape by our actions. As the competitors arrive again this week in Ratheniska for the National Ploughing Championship, we are reminded that this is indeed a particularly beautiful area of Laois, and it fills us with pride that our community, through enormous commitment and perseverance, has managed to protect our precious resources from both Eirgrid and ESB who are determined to plough on with the project at any cost, with disregard for our community and natural resources,” they said.

The community group claim that Eirgrid and ESB have never explained the scale of the project, originally stated as a single powerline to Kilkenny and a substation.

“It has been clear to us that it’s now a substation for 17 powerlines, powerlines up to 85 meters high, and more disturbingly the substation containing up to 1,000 tons of oil on site as well as hexafluoride gas. This site is directly on top of our Aquifer which supplies 2.5 million litres of pristine water per day through seven reservoirs to 12,000 people in Laois. The Ratheniska community say this poses an unacceptable risk to our only water supply.

“Our community’s concerns were backed up by the RTÉ investigates programme where a whistle-blower in ESB demonstrated that ESB, showed shocking disregard for our environment. They say this revealed leaking pollutants, oil and gas, no proper processes in place to deal with oils or gases, at least 1 million litres of oil had leaked from various sources,” said a statment.

They claim the RTÉ show also revealed a extraordinarily poor reporting culture where it took a whistle-blower to report the pollution outside of the organisation in order to have the problem recognised.

The residents say Eirgrid and ESB also broke the law when they breached the conditions of planning permission in 2017.

“Our community re-iterates our call to ESB/Eirgrid to do the honourable thing, withdraw from Ratheniska/Coolnabacky and scrap this project.

“No number of threats or heavy handed tactics by Eirgrid/ESB will deter our community from protecting our precious resources and environment,” they concluded.

Eirgrid and the ESB issued a joint statement in response to the RTS protest and demand to withdraw the project.

The State-owned companies say the €110m Laois-Kilkenny Reinforcement Project, which was granted planning permission by An Bord Pleanála in 2014 following an Oral Hearing, is a “vital upgrade of the electricity system in the Midlands and Southeast”.

They say the problems relate to the quality of supply across Laois, Carlow, Kildare and Wicklow and a security of supply issue that affects County Kilkenny. They say these are caused by weaknesses and a lack of reliability on the transmission network across the region as a result of continued growth in demand for electricity. The problems are starting to become critical.
The statement addresses ongoing protests and issues raised.

“ESB Networks regrets that its crews and contractors have been prevented from accessing its site at Coolnabacky near Ratheniska, Co Laois over the past number of months.

“We recognise that there are some concerns locally relating to the project and to that end has worked over the past number of years to engage with the local community and provide reassurance around the project. A comprehensive hydrogeological and hydrological review of the site at the proposed Coolnabacky substation, published in March and available here, found that the proposed development will not impact on local water sources, posing ‘no significant risk’ and corroborating previous studies undertaken on the development.

“ESB Networks is accessing the site to undertake works associated with the hydrogeologist’s recommendations, as well as other site enabling works and the Athy-Portlaoise overhead line diversion works.

The statement also drew attention to the EirGrid Community Forum and Community fund.

“The Laois Kilkenny Community Forum and Community Fund were established by EirGrid earlier this year to recognise the important role that local communities play in the development of the electricity grid.

“EirGrid will this week update the forum on a scoping study for the allocation of €204,600 in funding to communities across the two counties. The funding, which represents 40% of the overall Laois Kilkenny Community Fund, is expected to be released later this year,” it said.

The companies say a meeting will take place of the Community Forum on Thursday, September 16 where external agency M-CO will present the study to the forum, which they say is made up of local representatives of the Laois-Kilkenny communities and is independently facilitated by Irish Rural Link.

“The Laois-Kilkenny Project addresses problems that affect quality and security of supply in Kilkenny, Carlow, Kildare and Laois.

“The proposed infrastructure consists of a new 400/110 kV substation situated to the south east of Portlaoise, at Coolnabacky. Two existing overhead lines will connect to this new substation. These are the 400kV Moneypoint-Dunstown line and the 110 kV Athy-Portlaoise line.

“Other infrastructure includes a new 110/38 kV substation located next to the existing 38 kV electricity substation at Ballyragget, County Kilkenny, among other upgrade works,” concluded their statement.