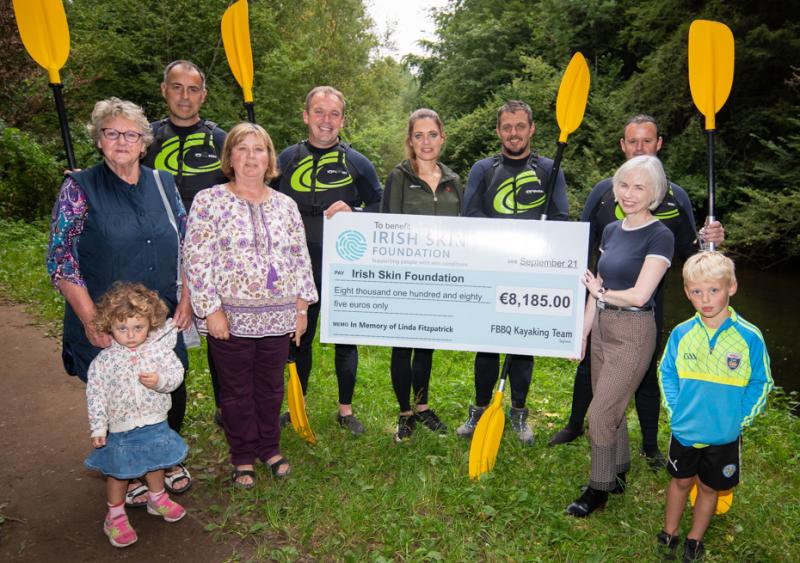 The family and friends of a beautiful young midlands woman who died earlier this year, have marked her life by completing a kayaking river adventure.

In the process they raised over €8,000 for the charity who supported her through her illness.

Linda Fitzpatrick, a hairdresser from Walsh Island, was aged just 38 when she passed away suddenly last April 2021. Linda's death shocked her parents Annette and Johnny, her only brother Keith as well as her wider family and friends.

Her funeral took place during strict Covid-19 restrictions, making grieving even harder to cope with for her loved ones.

Below: the late Linda Fitzpatrick with her brother Keith. 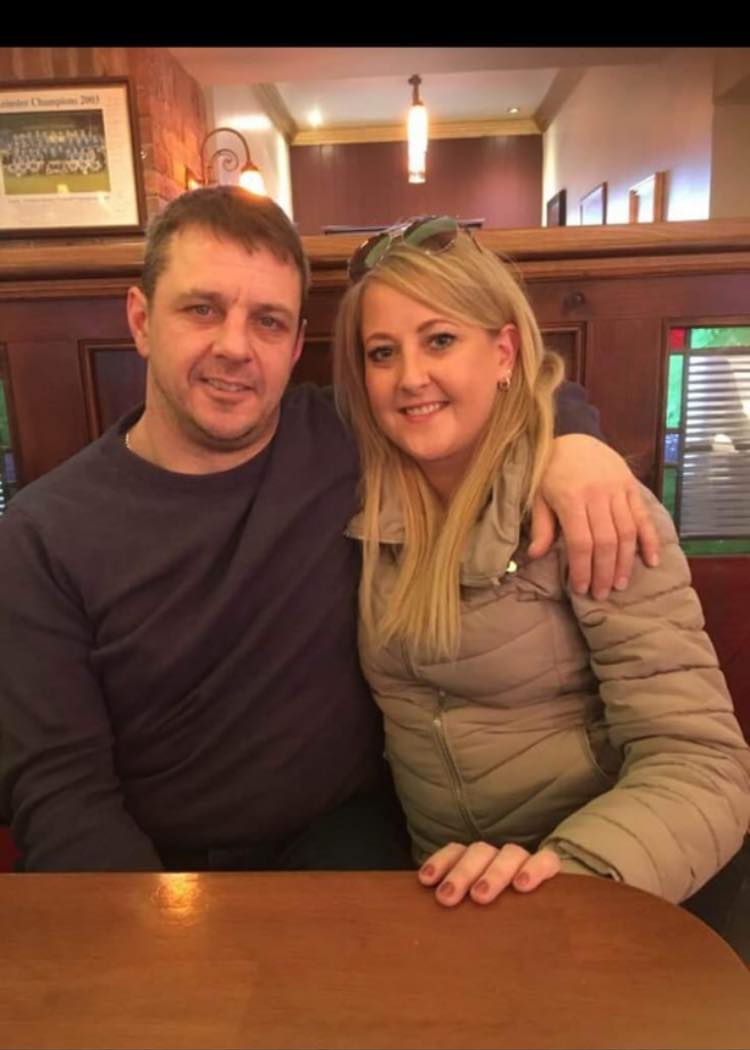 Afterwards the germ of an idea began to grow, for her brother Keith, an electrician, and three friends to kayak down the Barrow river, all the way from Laois to Enniscorthy.

They planned to paddle some 100km along the River Nore, over weirs and whitewater, from Durrow to Enniscorthy in three days, camping along the route.

They would try to raise money for the Irish Skin Foundation, a small charity who support people living with skin conditions.

The only flaw is that the lads had no experience whatsoever in kayaks.

Yvonne Beere Byrne, Liam’s wife and Owen’s sister, had taken on the task of administration and promotion of the charity fundraiser.
A leader in Mountrath Scouts, she got a loan of scout kayaks to give the lads some experience on the water, ahead of the big trip on the August bank holiday weekend.

“They put in a lot of commitment and training, out on the river two or three days a week, and then at the weekend trying out stages of the route. After their first lesson the lads were nearly finished, but they kept it up, and increased their fitness and upper body strength.”

Below: the FBBQ (Fitzpatrick, Byrne, Beere, Quinlan) team and supporters about to start their challenge in Durrow. 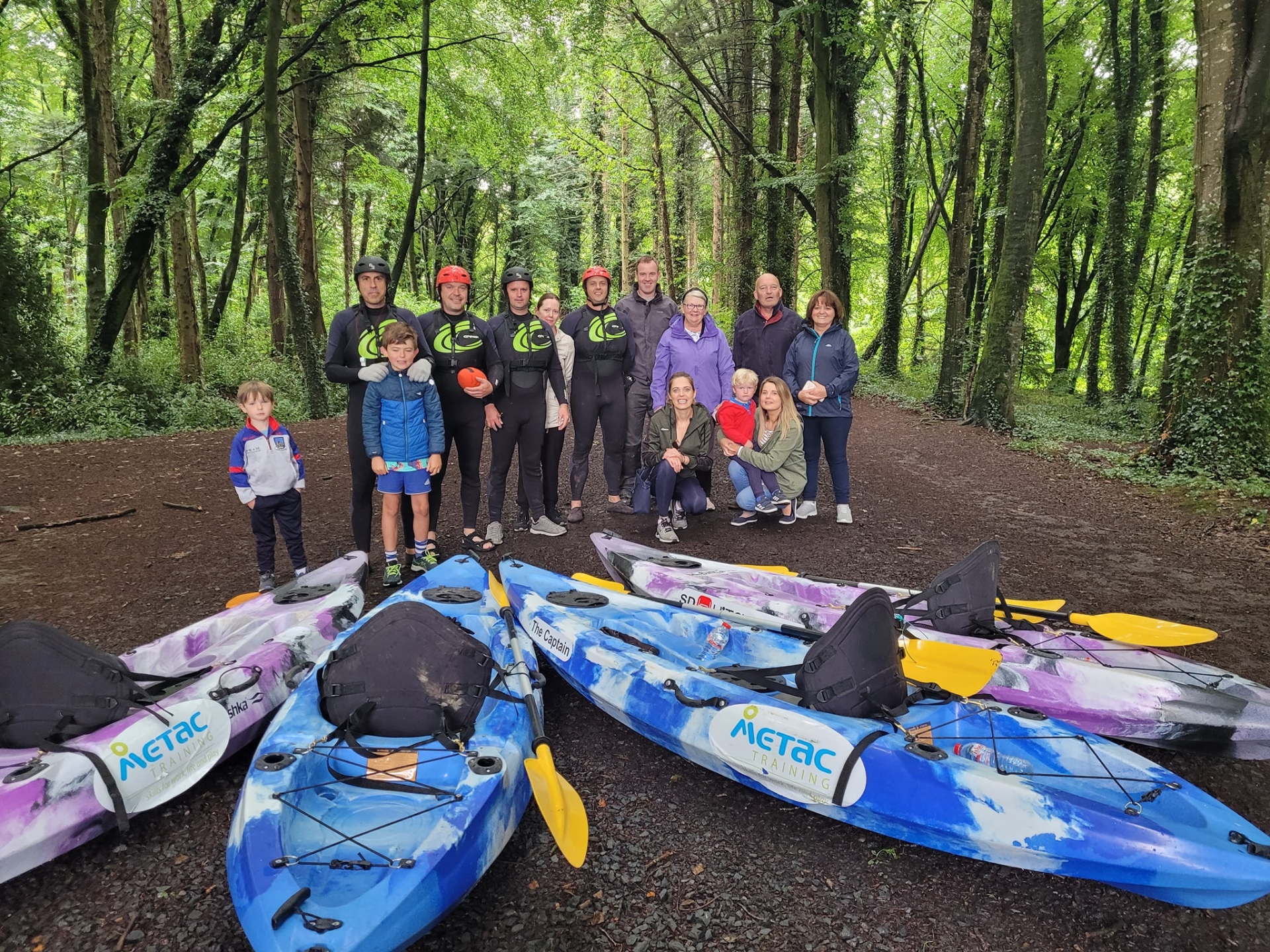 They realised that better kayaks, wetsuits and gear were all required and local sponsors quickly came on board. Others began offering huge prizes for a raffle.

“Once we said it to one person, everyone wanted to help, the doors were open. The scouts were just fantastic, offering facilities and training. Anne Marie Maher the Laois Sports Officer got helmets and life jackets and guidance, she is amazing. She gives so much of her time. It can go under the radar because people think it’s her job but she does much more than her job, we really appreciate her input,” Yvonne said.

When the big day arrived on July 30, it was emotional.
“We started with a minute’s silence. It was hard. After all the training and organising, we all just stopped for that moment to think of Linda.

“She was a very bubbly outgoing girl with a huge sense of humour, very much loved by her family and friends. She was easygoing and always ready to chat and to help as much as she could. There was just a lovely energy from her,” Yvonne said.

She posted updates on a special Facebook page called Linda Fitzpatrick Memorial in Aid of the Irish Skin Foundation, and the donations rolled in on an iDonate account.

Watch below as the lads negotiate some tricky water.

So too did offers from restaurants and businesses along the way in Kilkenny and Wexford to support the lads en route.

“The support locally and nationally was brilliant. I am humbled by the generosity, we appreciate every single euro people gave. Irish people are so generous, I can’t get over how people find it, and it hasn’t been an easy time for anyone,” she said.

Yvonne said the adventure was a way to celebrate and mourn properly together for Linda.

“It was a way of bringing everyone together, and it was therapy, it was what they needed. At the funerals during Covid, you just didn’t get proper closure, you can’t hug or touch, and the funerals were so short.

“At the end, Keith’s mother and family were all waiting for the lads. Just to see their little heads coming around the bend in the river, and they were absolutely wrecked. The weather was perfect. The previous weekend was scalding hot they wouldn’t have been able for it. Linda was looking down on them. I admire them so much for what they have done,” she said.

The group presented their final amount of €8,185 to the charity recently, at Durrow with Linda's family also coming along for the cheque presentation.

“A big thanks to the Irish Skin Foundation. They were so helpful and stayed in contact with us throughout our venture. They are a small charity who we were delighted to help out, and they really appreciated our donation,” Yvonne said.

See all their updates on the Linda Fitzpatrick Memorial in aid of the Irish Skin Foundation Facebook page here.