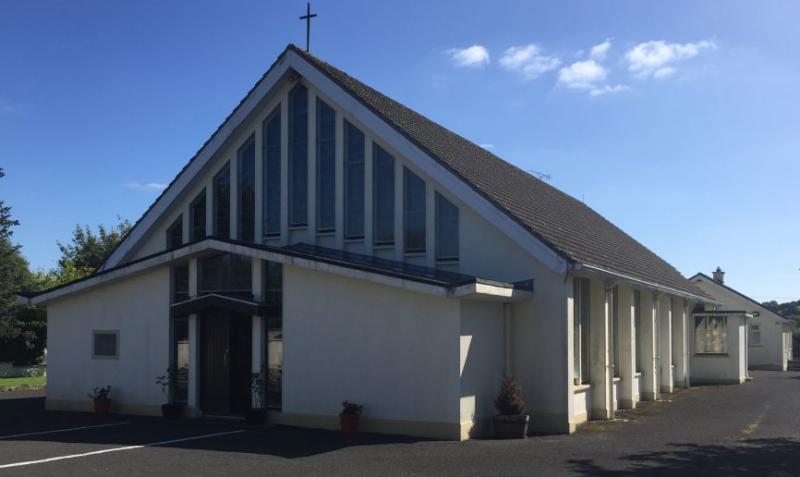 In November 2021 the parish of Rathdowney and Errill will celebrate the 50th anniversary of the opening and dedication of Our Lady Queen of the Universe Church in Errill.

To mark this Jubilee celebration the parish and local community are planning a number of events over the next few months.

The centrepiece of the celebrations is a Camino or walking pilgrimage over four stages.
Each of the four stages is inspired by the routes and locations associated with the faith history of the community during the three centuries leading up to the building of the church in Errill village in 1971. 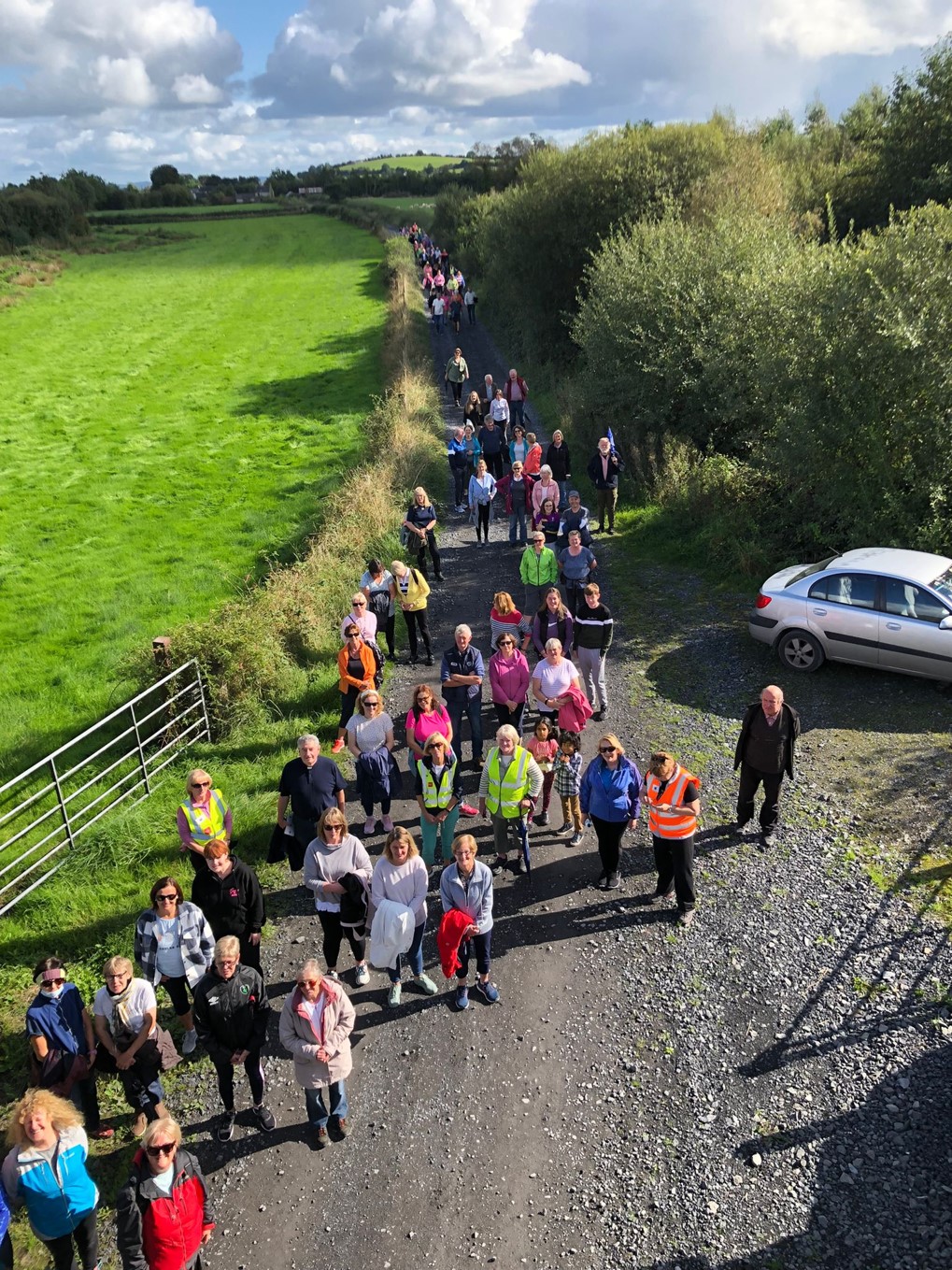 Carrigan’s History of The Diocese of Ossory states, “During the Cromwellian oppression of Irish Catholics in the mid 17th century the celebration of Mass would have ceased altogether in the parish of Rathdowney were it not for some zealous priest, who braving all danger, took his stand in what may well be called ‘his last ditch’ and celebrated Mass for his people in the Little Derry, a small bog island very close to the bounds of Co. Tipperary. There was a small wooden structure set up here, but its use was merely to shelter the rude altar.”

On Sunday, September 19 Fr Martin Delaney PP celebrated Mass once again in this special place remembering all those who had prayed there all those years ago.
After Mass a Camino passport was distributed to the congregation which was stamped with the parish stamp to signify that the first stage was complete. This passport will be stamped again on completion of each of the next three stages for pilgrims. 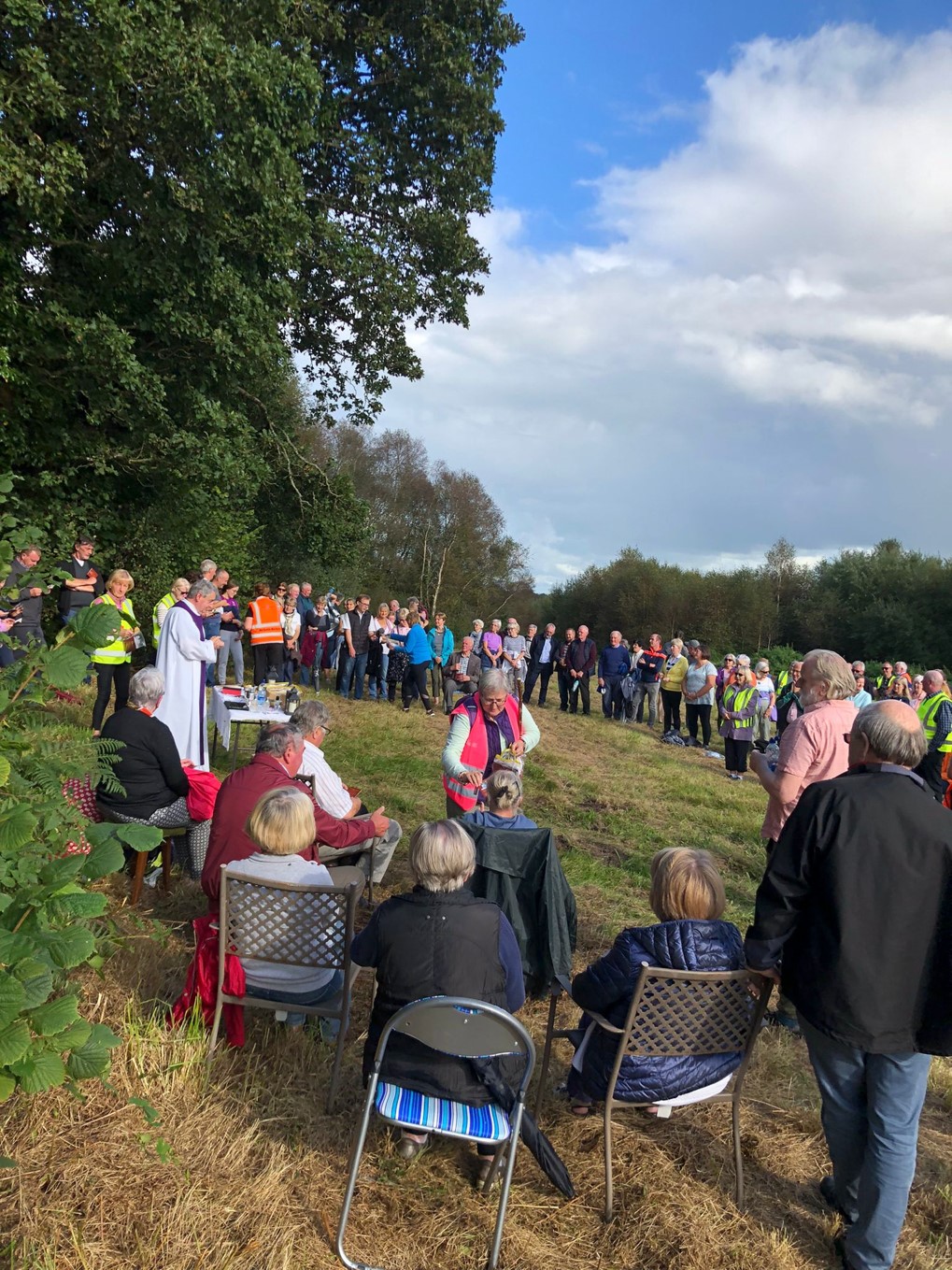 The second stage of The Camino will take place on Sunday, October 3 at 7am with the other stages happening on Sunday, October 10 at 9.30am and the fourth stage happening on Saturday, November 20 at 12 noon. Later on the 20th there will be Mass to celebrate the 50th anniversary of the opening of the church and this Mass will be celebrated by Bishop Denis Nulty, Apostolic Administrator of the Diocese of Ossory.

If you missed the first stage of the Camino you can still join the pilgrimage at the next stage of Sunday, October 3 at 7 am from Our Queen of the Universe Church Errill.

Second Stage of The Camino: Graigueavallagh to Errill, Sunday, October 3 at 7am
Carrigan’s History continues: “When the persecution abated, the woodwork and altar were removed from the Little Derry and set up in a more central place, in the townland of Graigueavallagh.
“Tradition hands down that the work of removal was effected by staunch men named Maher, ancestors of the present Mahers of Coolkerry.

“The ‘Chapel Pit’ in Graigueavallagh, an old disused sandpit, then became the great Mass-Station for all of Rathdowney parish, and continued as such for about a hundred years. It’s title Chapel Pit may be regarded as a misnomer, in as much as the so-called “Chapel” can have been nothing more, at best of times, than a miserable shed.”

With an early morning start the second stage of the Camino leaves the site of the Chapel Pit in Graigugeavallagh through Kylemalawn and Borahan Lane, pausing for prayer at the monastic ruins of St. Kieran and the local cemetery, then arriving at Errill Church for a short service of Reconciliation and healing and the conclusion of the second stage of the camino

Third Stage of The Camino: Graigueavallagh to Grogan: Sunday, October 10 at 9.30am
Carrigan’s History continues: “At length came the dawn of better days. Mr John Burke O’Flaherty, a Catholic gentleman, having acquired the fee-simple of the townsland of Barney and Mount Oliver, made a free grant of an acre of land, in the latter, for the site of a chapel. This was about 1775.

''Fr. James Butler, the P.P. at once set about erecting a small temporary chapel on the new site. When the walls were built and roofing material could not be readily procured, the difficulty was solved by a number of strong men lifting off the roof of the ‘chapel’ in the Chapel Pit, bearing it bodily and intact on their shoulders, and placing it again in the same condition, on the bare walls of the new chapel.
“Such is the history of the foundation and completion of the first chapel in Grogan. This chapel was thrown down and another built on its foundations in 1791 by Father Purcell PP

''The present chapel, the third on the same site, was built by Fr. Tracey PP in 1826, around and over its predecessor, which was only taken down when the new edifice had been roofed in.”

Fourth Stage of The Camino: Grogan to Errill, Saturday, November 20 at noon
The church built at Grogan in 1826 remained in use until 1971. In November 1971 the new church dedicated to Our Lady Queen of the Universe was opened in Errill village.

The beautiful stained glass windows from Grogan are now to be found in two churches in county Kilkenny, The Rower and Glenmore.

Two of the Grogan windows remain in the parish, one depicting St. Colmcille which is over the altar in Errill and another window dedicated to St. Vigilus (Fergal) is erected in the Religious Studies room in St. Fergal’s College, Rathdowney. 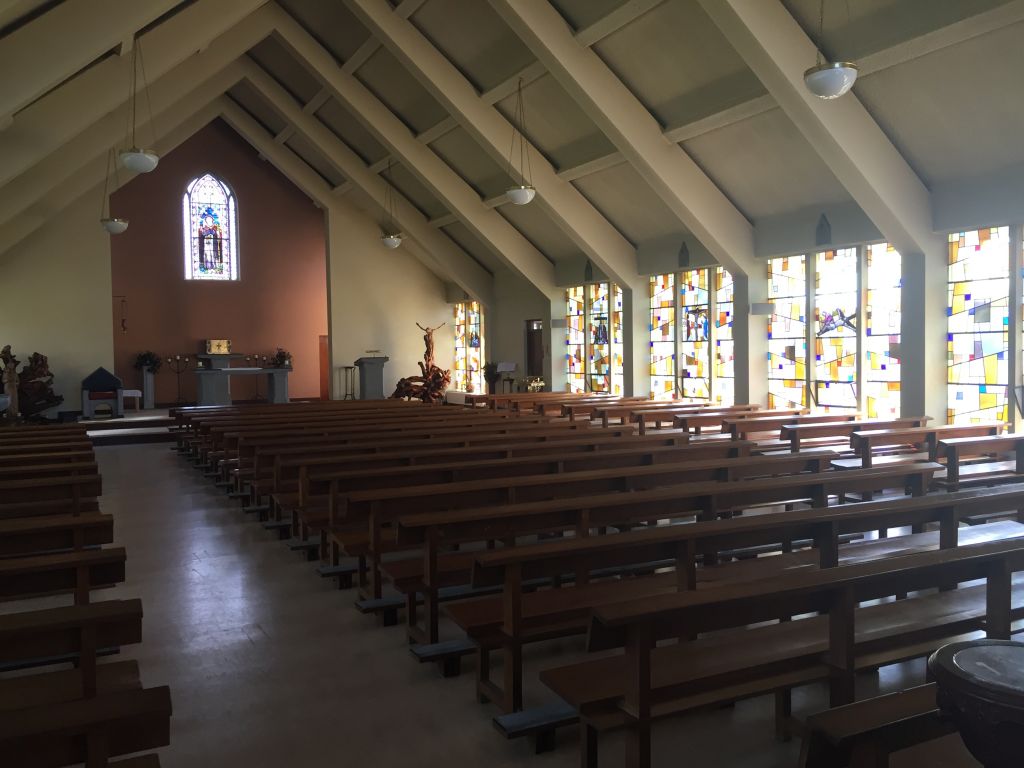 For our fourth and final stage of the Camino the community will gather for a short prayer in the grounds of Grogan church and then walk to Errill Church.

“Later in the evening of Saturday 20th we will have a Mass to celebrate the 50th anniversary of the opening of the church and this Mass will be celebrated by Bishop Denis Nulty, Apostolic Administrator of the Diocese of Ossory,’’ said Fr Martin Delaney PP.

''Following the evening Mass there will be refreshments for everyone. We would particularly love to welcome those who were baptised, received First Communion, Confirmation or were married in Errill during the last fifty years to come and join us for this celebration.’’