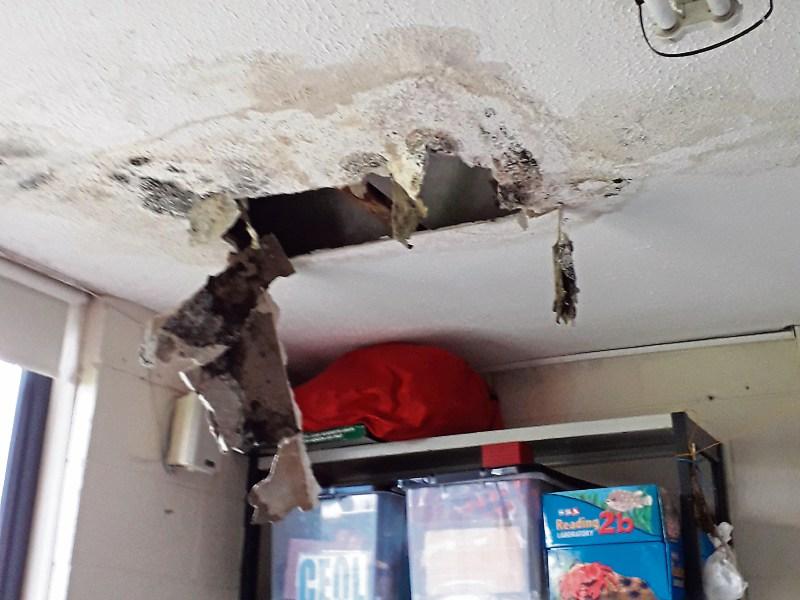 Problems with leaks, sewerage, electrics and insulation at Scoil Mhuire in Abbeyleix will be solved by a complete overhaul and retrofit and not a new school, according to Laois Offaly TD and Minister of State at the Department of Finance Seán Fleming.

Minister Fleming said in a statement a 'solution' has been agreed to deal with problems which have in the past led to some classrooms being declared off limits.

His statement means that the Department of Education does not believe the problems at the school built in 1983 are not bad enough to necessitate a new building.

"We now have a solution to all the major problems of Abbeyleix Scoil Mhuire’s building," said Dep Fleming.

"This work will solve the problems of the leaking roof, sewage smells and involve a full new insulation of the building including a new heating system, new windows and more.

"Scoil Mhuire, Abbeyleix  has been selected for inclusion in the 2022 Schools Energy Retrofit Pathfinder Programme for works to the original 1980s blocks.

"This pathfinder will see these areas of the school receiving substantial energy upgrading, internal completion refurbishment works and renewable energy systems. These works will provide a transformation to a modernised, sustainable low energy building for the future including renewable heating system, extensive insulation and external fabric upgrade, new LED lighting and solar Photovoltaic panels and air tightness works," he said.

The Fianna Fáil TD said he had worked closely with the school staff, Board of Management, parents and students highlighting these problems and the urgent need for refurbishment.

"The staff and students have coped incredibly well attending school with these issues and I look forward to this work fully resolving these problems. Work will commence before the second half of next year," he said.

Problems with the school were first made public by parents at an INTO pre-election meeting in Portlaoise.

"During the last election I stated that resolving the building problems at Abbeyleix Scoil Mhuire primary school was a key priority of mine and I am very pleased to have delivered on this commitment," said Minister Fleming.

Laois/Offaly Fine Gael TD, Charlie Flanagan said he has  also received confirmation from the Department of Education and Skills that the school has been selected for inclusion in the 2022 Schools Energy Retrofit Pathfinder Programme.

Laois Offaly based Senator and Green Party Minister of State Pippa Hackett said the school has been appealing for an upgrade of its facilities for some time.

“I visited this school in June and the Principal Aidan McEvoy showed me the bad state of repair that the school was in,” said Minister Hackett.

“I am thrilled that this is being addressed and the school will benefit from a substantial energy upgrading, internal completion refurbishment works and renewable energy systems.

“I commend the whole school team for their perseverance during a difficult time and wish them well with these upgrades.”

Blocked toilets, damp, water pouring through ceilings into classrooms were highlighted to candidates which included the then Minister for Justice Charlie Flanagan and the other two outgoing Laois TDs, Brian Stanley and Sean Fleming at a pre-General Election meeting hosted by teachers in 2020.

Temporary repairs were subsequently carried out.

Minister for Education Norma Foley met the parents, staff and board of management remotely in March 2021. She promised to deploy department officials to Abbeyleix to decide on what was the appropriate solution. She said there were two options -a complete retrofit or a new building.

Mr Aidan McEvoy led the delegation which made the case for change to the Minister. He said there were problems in five key areas focused on were the roof, sewerage, insulation, electrics, and dampness.

"We made the point that the more money we spend on temporary patch jobs the greater the waste of money that is," he said.

Mr McEvoy said at the time that the existing building was given a life span of 30 years when built in 1980.

Scoil Mhuire is a co-educational Catholic primary school under the patronage of the Catholic Bishop of Kildare & Leighlin diocese. It has 22 full-time teachers, 10 special needs assistants, secretary & caretaker.  There are 3 ASD classes.