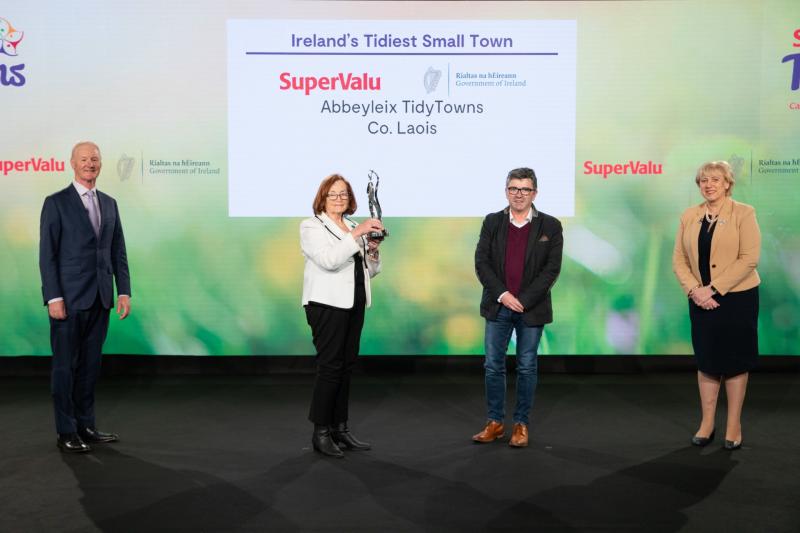 One of the biggest prizes in the National Tidy Town's Awards is coming home to Laois with the Abbeyleix Tidy Towns Comittee taking home the award for Ireland's Tidiest Small town.

Mary White and Robbie Quinn were on hand in Dublin to accept the award  which is just reward for huge efforts by the committee and the community over many years.

The announcement was greeted with much celebration and excitement at the awards ceremony at The RDS on Friday, November 12.

The judges complimented the Abbeyleix entry.

"Well done Abbeyleix. The adjudicator comments that the volume of work that you have carried out is absolutely outstanding," they said.

Abbeyleix Tidy Towns was on the shortlist of entries from right around Ireland. It saw off Blackrock in Cork to claim the trophy.

The heritage town was also the Midlands and East Regional winner. It won a special Climate Action and Air Quality Award. The committee's work also saw it take home a special award for encouraging pollination under the All-Ireland Pollinator Plan.

The 354 points awarded also secured Abbeyleix first place in county competition for Laois with Castletown in second and Ballacolla in third.

Abbeyleix was also judged to be worthy of a national gold medallist while Portlaoise was a national silver medallist.

The Laois town did everything but be declared Ireland’s Tidiest Town for 2021 which the Minister for Rural and Community Development, Heather Humphreys TD, announced as Ennis in Co. Clare.

The announcements were made at a scaled-back event held in the RDS with a small number of representatives present from this year’s entries to the competition.

The event was streamed live to thousands of Tidy Towns volunteers around the country who were eagerly awaiting the announcement of the winners.

The SuperValu TidyTowns competition has been in existence since 1958 and Ennis, was judged to be the best from a number of 847 entries to the competition this year.