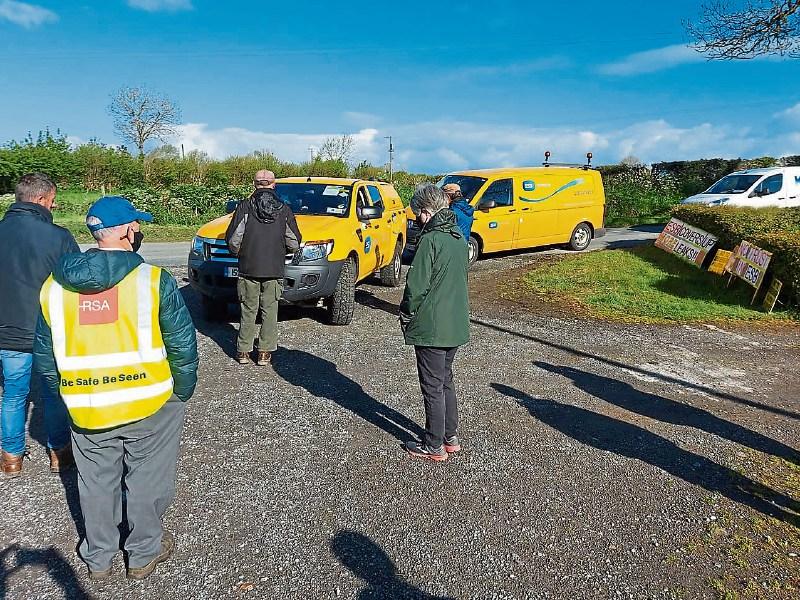 RTS Action Group protest at the site near Ratheniska

Four Portarlington Graiguecullen Municipal District united in their appeal to the local authority's planning section to inspect the site and step in over alleged non-compliance with planning permission.

The issue was raised at a Municipal District in Portlaoise which was attended by the group opposed to the project. Councillors agree with the Ratheniska, Timahoe, Spink Action Group's assessment that several conditions of the planning permission granted by An Bord Pleanála have not been complied with.

While Laois County Council did not grant the planning permission, the councillors and residents want them to step in because the council has the powers to enforce the conditions placed on the ESB / Eirgrid project Laois Kilkenny enforcement line project.

Chief among the concerns of the Action Group and the public representatives at the meeting was the impact on the underground water supply. They say work already done shows that water from the aquifier is leaking out onto the site.

The meeting heard that steps concrete is being poured into foundation holes without the lining beneath it to protect the water supply as required in the planning permission.

Councillors were also extremely concerned that 300,000 litres of oil will be stored on site and believe that work carried out to date confirms the fears of residents that there is a high risk that this will contaminate the supply of drinking water to 25,000 people in surrounding  parts of Laois.

Other issues raised by councillors included the washing of trucks on site and the entrance being used.

Cllr Padraig Fleming, Fianna Fáil, backed the residents. He said there had been a previous experience of non compliance in an early phase of construction. He said the high level of the water table is well established but pictures taken of the work being carried out show that water from underground is pooling where digging has taking place with pumps being deployed to take away the water.

"The responsibility is on the developer to either cease these works or put measures in place before the proceed any further to ensure that the water supply is going to be safe.

"At this stage we will be calling on Laois County Council and the chief executive to stop this work immediately. It needs to be stopped because there is a major threat to the water supply. The time has come to shout stop because of the health implications for the people of the area and the wider Laois community," he said.

"The concerns are that at the moment the works recommenced in October and already, the RTS Group believe that (the developers) are in breach already," he said.

He claimed that the absence in planning documents of the the inclusion of two containers to hold 300,000 litres of oil on the site was 'astonishing'. He said storing this oil on the site has the potential to cause a 'major catastrophe'.

He said Laois County Council has the authority and responsibility to ensure that the planning conditions are 'rigidly complied with'. He said the council must go on site 'immediately' to determine if there have been any breaches given the scale of the development.

"There is nothing to stop a planning official going down to the site to determine if they are offside," he said.

Cllr Ben Brennan, Independent, backed the calls. He also wanted to know what action the council would take and if the council knows what is the safe distance a development should be from the water supply.

Cllr Aisling Moran, Fine Gael, also focused on the oil storage and was concerned about the risk to the supply. She also wanted to know if Laois County Council had an alternate water supply if contamination occurs.

She claimed no commencement notice had been submitted to the council while a new vehicle entrance to the site had not opened.

Cllr Moran said the residents have highlighted all of the issues to Laois County Council's planning Department. She called on Laois County Council to close down the site until all the conditions have been complied with. She claimed that there are no named ecologists on site.

She said councillors are not trying to stop progress but another site other than over a aquifer should have been examined.

She said there is a €300,000 budget to support enforcement and demanded immediate action through an inspection.

Mr Gerry Murphy, Director of Services, told councillors that he would raise the issue with the Planning Section.

Cllrs PJ Kelly and Paschal McEvoy did not join the other councillors in their appeals.

The Leinster Express has asked the ESB for comment.

The project was devised more than a decade ago and eventually granted permission in 2014 as a strategic infrastructure development by Laois County Council.

The ESB and Eirgrid have said the €110 million project is vital to secure power supplies on the Laois Kilkenny line.