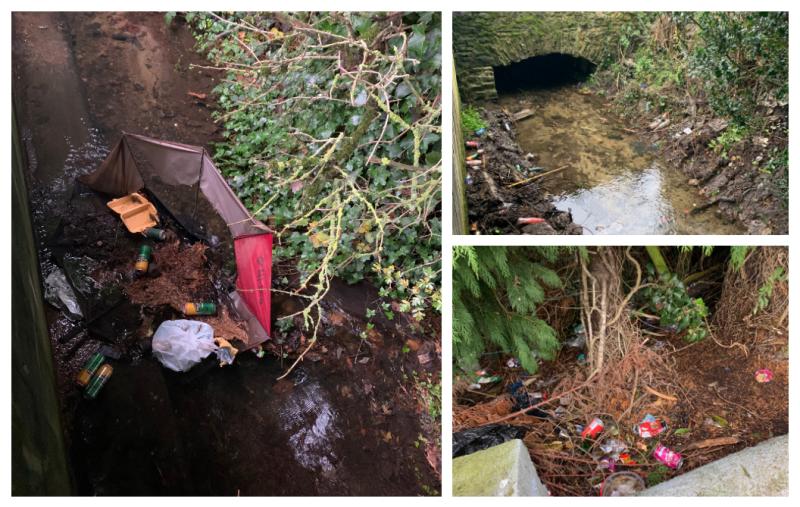 A councillor believes an inspection for dumping in Mountrath was carried out in the wrong place and he claims he has evidence of the problem beside a local river.

Cllr Conor Bergin, Fine Gael, raised the issue of littering Shannon Rd, at a recent Laois County Council meeting where he was supported by a colleague who claimed syringes were among the items collected on a community clean up.

He called on Laois County Council to “urgently address” what he said was illegal dumping and littering issues. He wanted the issue tackled as a “matter of priority”.

He received a written reply from the Council’s Environment Section which confirmed it has received several representations on illegal dumping/littering at a particular location on the Shannon Road. However, its warden did not find proof.

“The Litter Warden will continue to carry out regular inspections on the Shannon Road.  All communications from the public on illegal dumping are greatly appreciated,” said the reply.

Cllr Bergin was surprised when he received the response at the December meeting of the Borris-in-Ossory Mountmellick Municipal District.

“I am a bit perplexed that the litter warden walked it and saw no illegal dumping. All he had to do was look over the wall,” he said.

Cllr Bergin said he walked the route himself where the dumping is taking place.

“There is food waste, plastic bags, beer cans and a lot of it is going into the river,” he said.

He added that there is a danger it could cause environmental damage.

He also said that an elderly resident had to erect a fence because of the dumping near his property.

He said he would walk the road with the warden if another visit could be arranged.

Cllr Bergin called on the local authority to work with a private landowner who owns the property where the dumping is happening. He suggested that surveillance could be an option to detect those.

He acknowledged that the use of CCTV was tied up by GDPR regulations but added that €50,000 is available for surveillance. He hoped this could commence in 2022.

“Illegal dumping is disgusting and is an awful blight on our county,” he said.

Cllr James Kelly, Independent, said the Shannon Road is 1km in length. He agreed that rubbish is being dumped on a 70 metre stretch along the river.

He said it was worse in previous times and the waste had been cleaned up by local people.

“The Shannon Road was amongst the worst areas,” he said.

He said the waste included everything from nappies, takeaway cartons, a toilet seat and ‘worst of all syringes’.

He agreed that the area highlighted by Cllr Bergin needs cleaning. He added that it is too easy for people walking by the river to throw waste over the wall.

“It is causing serious problems,” he said.

Cllr Ollie Clooney, Independent, agreed with the use of CCTV. He added that while a small minority of people are dumping illegally, they are causing a big blight on the community.

Mr Donal Brennan, Director of Services, said he would communicate the issues raised with the Environment Section. He added that there may have been a misunderstanding of the precise location.