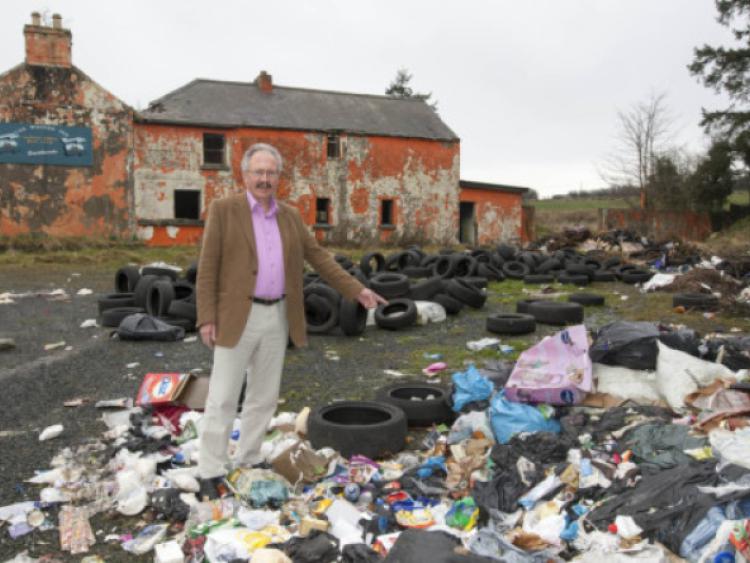 A LAOIS County Councillor is calling for one of the worst areas of dumping in the county to be cleaned up.

A LAOIS County Councillor is calling for one of the worst areas of dumping in the county to be cleaned up.

The Rushes Inn, a derelict pub on the N78 has been a hotspot for dumping over the last number of years.

But the problem has become a lot worse in the last few months when loads of tyres were dumped at the site.

““The Rushes Inn has become an awful dumping ground over the last few years, the council have previously tried to clean it up but the problem still continues,” local councillor, Padraig Fleming said.

Late last year, the council erected cameras around the site in an effort to curb the dumping and hopefully track the culprits, but once the cameras were removed, the dumping began again in earnest.

“Over the last year it has got worse.

“The site is regularly checked and the council have been responding positively, but something needs to be done about it now.

“The N78 is a major regional route, the dumping has become an eyesore and it’s also attracting vermin.

“It’s one of the worst cases of dumping on a public road in the county,” he said.

“I know the site is in private ownership, and the council are doing everything they can to track the owner.

“But I hope that they can look at this in a positive way and resolve a long term problem.

In a letter to Kieran Kehoe, Director of services for the environment, Cllr Fleming said he would be grateful if the council would consider cleaning up the area.

“Please see can this matter be examinied as it is one of a few major eye sroes on the national secondary route through the County.

“I stress that this is very visibke for all the traffic on this busy road passing through the County and I hope the council will do everything in their power to deal with this,” Cllr Fleming appealed.

Although the site is in private ownership, Mr Kehoe said the council have powers under the public health act and the derelict sites act to clean the site up.

“But it still could be months before the council have the money to carry out the work.

“I have been out to the site with John O’Donoghue and we are getting a price to clean the site up,” he said.

“We will go through the rubbish to see if we can find a name of someone who owns the rubbish that has been dumped there.

“We will also persue the owner for the cost.”

Mr Kehoe continued: “We have powers of entry under the public health act and the derelict sites act.

“We have to get a price first and then try and secure the funding, but I would hope that in the next few months we will be able to do it.”