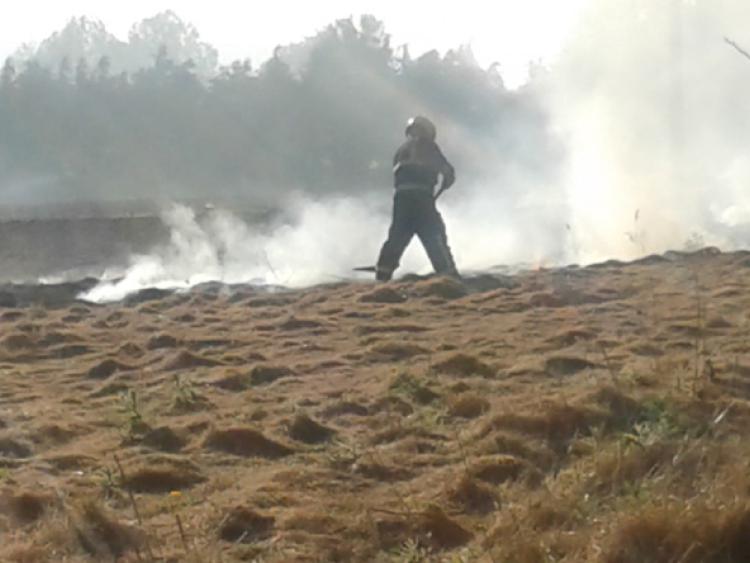 A raging grassfire that is suspected to have been deliberately started, came close to damaging the Cuisle Centre in Portlaoise last Sunday evening, June 9.

A raging grassfire that is suspected to have been deliberately started, came close to damaging the Cuisle Centre in Portlaoise last Sunday evening, June 9.

A dozen firefighters from Portlaoise station spent an hour getting the fire under control, in what was the final day of a week of hot dry weather.

The twenty acre field lies across from Portlaoise Prison, between St Fintan’s Hospital and the Block Road. There was cut dried grass lying on it. which combined with a strong breeze to enable the fire to quickly get out of control.

Assistant Chief FO Liam Carroll said they were alerted just after 7pm and arrived in minutes, with two appliances and a water tanker.

He said the fire “skirted around the edges” of the Cuisle Centre, a volunteer cancer support centre. However the building did not need to be evacuated.

He agreed it helped that the fire station is just yards from the field.

“We were able to get there quickly and knock the fire down. It spread to leylandii trees in a laneway and got hold, but we put a lot of water on them. It looked more dramatic than it was. I do believe it was deliberately started,” he said.

Fifteen acres were burnt, creating a dramatic smoky skyline in the town centre, as captured by eye witness Paddy Fitzpatrick with his phone camera.

“I could see it from the motorway, I thought it was the sawmills at first. It was spread around the centre. They were lucky the wind direction was going the other way, the whole field was on fire,” he said.

ACFO Carroll reported no other fires in Laois despite the past week of hot sunshine.

“We have been very lucky. We were expecting a lot more, there were no bog or mountain fires,” he said.

However he urged the public to be careful about lighting outdoor fires.

“People should be very wary about lighting fires in their gardens, burning grass or rubbish. Barbecues are also a danger,” he said.