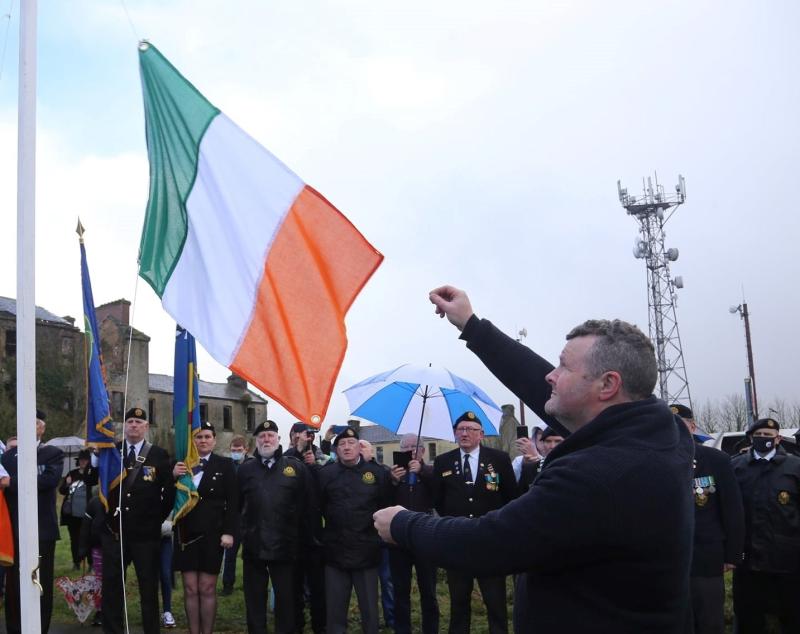 A Mountmellick was given the honour of raising the flag recently at an memorial event to mark the famous departure of the British from Tipperary after Ireland won its independence from the Crown.

John Lawlor raised the tricolour at the centenary commemoration marking the take over of Nenagh military barracks from the Empire.

John is the grand nephew of captain Terance Byrne from Mountmellick who formally took over the barracks in February 1922 on behalf of the state. Terance led the Laois brigade which had the honour of formally taking command of the building for the new Irish Free State.

On February 14, 1922, the North Staffordshire regiment left Nenagh for the last time. A similar withdrawal took place at the then Richmond Barracks in Templemore on the same day, while Newport Barracks was evacuated later that week.

Nenagh had been earmarked for evacuation by the North Staffordshire regiment on February 7. However, it was delayed by a week.

At 1.30pm on Tuesday, February 14, the Union Jack was lowered for the final time at the barracks and the band of the North Staffordshire Regiment led the parade as the local garrison marched to Nenagh railway station, where they departed by train to Limerick.

The regiment would be moved from Tipperary to Gibraltar eventually ending up in India until that country, too, gained independence from the British empire in 1948.

Their leaving was probably not just a cause for celebration among local republicans, but also the general population as not only with the withdrawal came peace, but the regiment was noted for its use of profanities, which, no doubt, grated on the ears of the local ladies and gentlemen.

On February 14, 1922, at 2pm, IRA units from Laois and north Tipperary formed up at Nenagh Courthouse and paraded to the barracks.

The Laois men were led by Capt Byrne, who formally took possession of the site on behalf of the State.

The honour of leading the local contingent was given to Capt Tom Walsh from Crowle, Cloughjordan, on account of he being the youngest captain in the 1st Tipperary Brigade.

The parade from the courthouse to the barracks was led by Thomas Gill, Dublin Road, who carried the flag.

The parade was accompanied by large numbers of townspeople, cheering loudly.

The North Staffordshires evacuated Newport Barracks that week also and it was taken over by the IRA under the command of Comdt Bill Hoolan, Nenagh.

Tipperary in the Decade of Revolution, in conjunction with ONE (Óglaigh Náisiúnta na hÉireann), mark the centenary of the handover of the barracks with a parade from Nenagh Courthouse to the barracks in Summerhill.

A parade retraced the route taken by members of the IRA from Laois and Tipperary who took over the barracks on behalf of the State.

At the barracks there was ceremonial lowering of the British flag and the Tricolour will be raised in its place. The flag ceremony was performed by descendants of people who were involved in both the British and Irish sides on that historic day.

The taking over of the barracks and seeing the Tricolour raised on the building was the first tangible effect for the people of Nenagh of the Treaty that had ben signed in London the previous December.

The memorial parade was be led by piper Gerard Neville of the Moycarkey Pipe Band and members of One from Tipperary, Limerick and Laois.

The event was non-political and the organises particularly welcomed former members of the Defence Forces and their families.

A commemorative booklet has been published as part of the event.