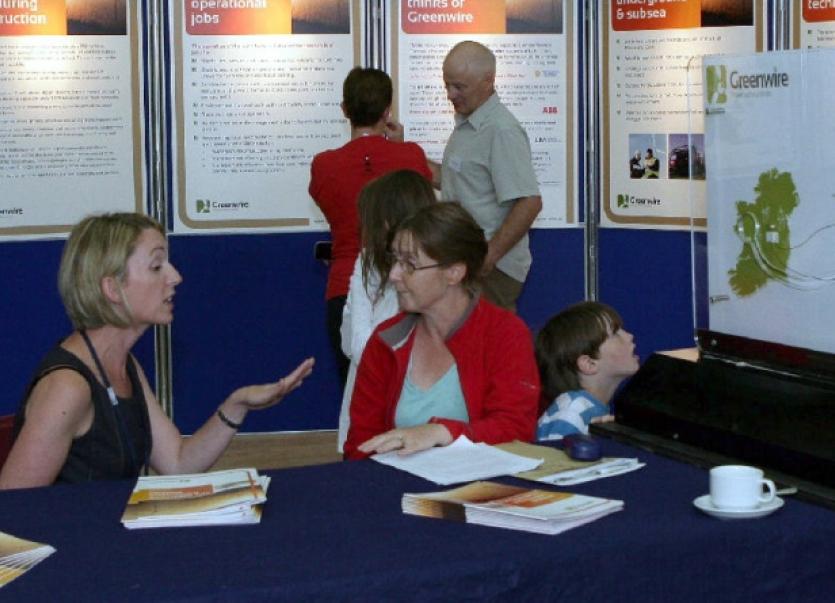 “If I was told I couldn’t sleep at night, my house was going to be devalued, my health affected, I’d be out marching too. I wouldn’t be involved in this project if there was the slightest chance of these happening. Our backers would not invest if there were ill effects,” Tim Cowhig said.

He says the Vicarstown open day was cut short after a protester spat at an employee. “That group wanted to take over, they had been to other meetings, asking the same questions over and over, using pure frustration techniques, this thing is too serious to play games,” he said.

He says the 750 turbine plan has many plusses for the midlands.

The project would be “completely independent” of Eirgrid’s Timahoe substation.

“We have an independent transmission system, there is absolutely no link. However if Ireland so wishes, it should be able to connnect to this grid at huge savings, it could be sensible, creating a secure supply to the UK and Europe,” Mr Cowhig said.

He says taller turbines on flat land are less visible than smaller ones on a mountain.

“Bigger blades also mean less turbines and slower movement, so they are less obtrusive. Turbines move 90 per cent of the time, and there is absolutely no mechanical noise,” he said.

He claims “fear tactics” were used on farmers.

“Self styled experts are telling farmers they shouldn’t have signed. Every agreement we sign takes a three month legal process with farmers and their solicitors,” he said.

Greenwire will go to Bord Pleanala early next year. He hopes for approval a year later, including time for oral hearings from the public.

“We have to keep this project moving, or we miss the opportunity,” Cowhig said.