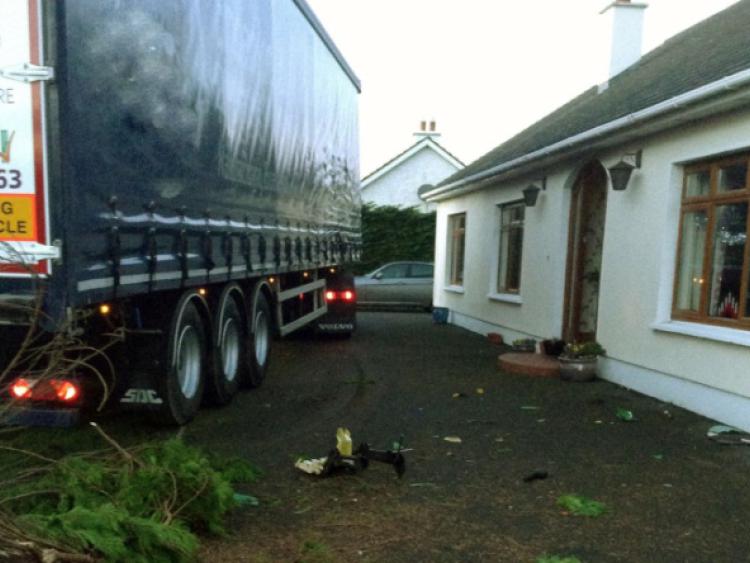 County hall insists that a substantial amount of work as already been carried on a stretch of road where a lorry narrowly missed a house near Portarlington at Christmas.

County hall insists that a substantial amount of work as already been carried on a stretch of road where a lorry narrowly missed a house near Portarlington at Christmas.

However one local councillor believes the speed limit should be lowered to prevent further accidents in the Kilmullen area on a road which carries nearly than 3,700 cars and trucks each day.

Laois County Council staff were on site where a 40 ft artic ploughed into the front garden of the Kavanagh & O’Kane family.

Cllr Tom Mulhall visited the family after the accident.

“If children or their parents were at the front of the house when the truck hit, there would have been fatalities.” said the councillor.

“There is no way you can do 80km on that road.” insisted Cllr Mullhall.

The Fine Gael councillor said there had been many accidents on the road. He had proposed that speed limit be lowered last Octobber but was told at the time by council staff that the speed limit review would not take place until early this year.

He said the road was the main feeder road for Tullamore traffic to the M7 motorway but it was now time for action. Apart from lowere speed limit, he said the road should be designated a accident zone so that gatzo speed vans could be deployed.

Cllr Mulhall said he would be contacting the garda chief superintendent on the issue and would raise the matter at the Joint Policing committee in February.

In a statement Laois County Council said the incident was one of two accidents reported at this location in one week but there had be no accidents at there previously. It said the R420 road at this location carries a significant volume of traffic having an AADT (annual average daily traffic) of approximately 3,696 the majority of whom negotiate the road safely.

In late 2012 early 2013 a number of accidents took place within a kilometre of this location at a bend. This council said these incidents were examined, roads surveys completed and the existing superelevation was improved slightly to make the road more forgiving. Since this work was completed there have been no reported accidents at that location. Surveys completed to-date have shown that traffic speeding violations were 20% on straight sections falling to 2% on bends. The road surface is relatively newly laid which is not yet half way through its expected lifetime.

Road surveys are underway at the moment and these will be looked at in conjunction with Gardaí, witnesses and mechanical reports. If a cluster accidents occurred the council said it investigates to understand whether the cause of the incident was due to driver error, mechanical failure, weather conditions, etc.

“If road conditions are considered to have been one of the contributing factors we will look to see if improvements can be made to assist driver behaviour and ease. On completion of study at Kilmullen into these two accidents should it be found that road improvement works are required Laois County Council will seek funding for improvement works,” said the council.