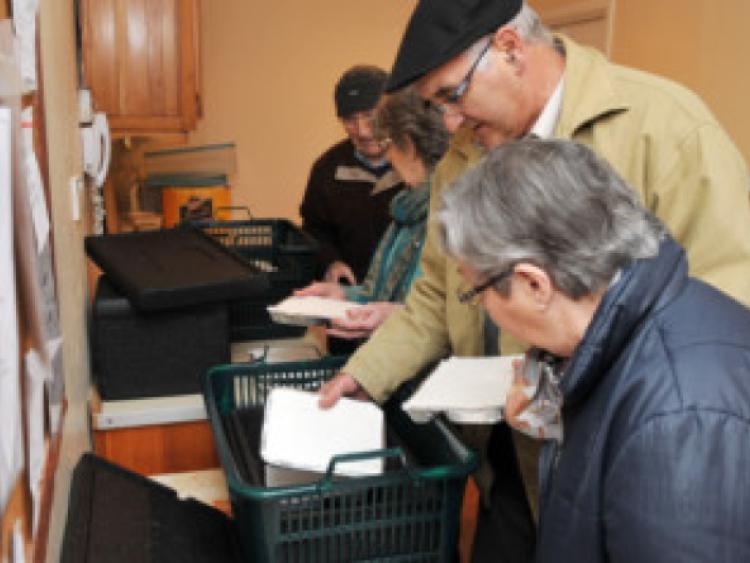 Forty years on after a few Abbeyleix concerned enthusiasts first put the concept of providing little extras to make life more meaningful for the old and lone dwellers in the local community into practice, ‘Abbeyleix Social Services’ are still sticking to their remit, but are doing it better and more often.

Forty years on after a few Abbeyleix concerned enthusiasts first put the concept of providing little extras to make life more meaningful for the old and lone dwellers in the local community into practice, ‘Abbeyleix Social Services’ are still sticking to their remit, but are doing it better and more often.

Of that group thet met in April 1974 in the Macra Na Feirme Hall there are very few surviving Members, however the ethos still remains. Founder members who are still involved are Mary Hearns and Helen Bergin who remain very active on the Committee as President and Vice Chairperson respectively.

In the early days Social Service in Abbeyleix had ‘Meals On Wheels’ as it’s forte. Shortly after its inception the group started to deliver dinners from the then ‘Hibernian (Hardings) Hotel’. This was funded entirely by local community.

In 1976 existing premises in ‘New Row’ on the Mountrath Rd was purchased with huge local financial support.

Today they are delivering dinners 3 days a week, 52 weeks a year, to up to 30 people. That’s in excess of 4,500 per year. The committee is very proud of this feat, never missing a Monday, Wednesday or Saturday in the four decades.

The number of people receiving dinners can vary depending on individual’s circumstances; however it is estimated that well in excess of 125,000 dinners have been delivered in the last forty years.

Equally important to the meal, is that a person knows someone will be calling 3 times a week. In some cases these people will have no other person who calls during the entire week.

The success and growth of social services is attributed to many factors, most notably the support of the local community, the financial backup of the HSE, the co-operation of the Abbeyleix hospital staff, community nursing staff, drivers and helpers at out centre, but above all the loyalty and dedication of the members themselves in the various lines of activity.

Besides ‘Meals on Wheels’, there is social aspect in the form of an annual summer outing and winter social. Visits to Aras An Uachtarain, Kilkenny Castle, The Japanese Gardens, Bunratty Castle, Croke Park are well remembered . Our annual social normally involves a meal in the local Golf club for in excess of 100 people.

There are positive plans for the future but Abbeyleix Social Services is facing a few hurdles. As the meals are prepared in ‘Abbeyleix Community Nursing Unit’, the service needs the facility to remain open. The service say they have worked well with the Director Of Nursing and staff and hope this relationship will continue.

The service needs younger members to get involved from the local community to keep their organisation vibrant and to ensure they will be here for the next forty years. Contact the committee to help.