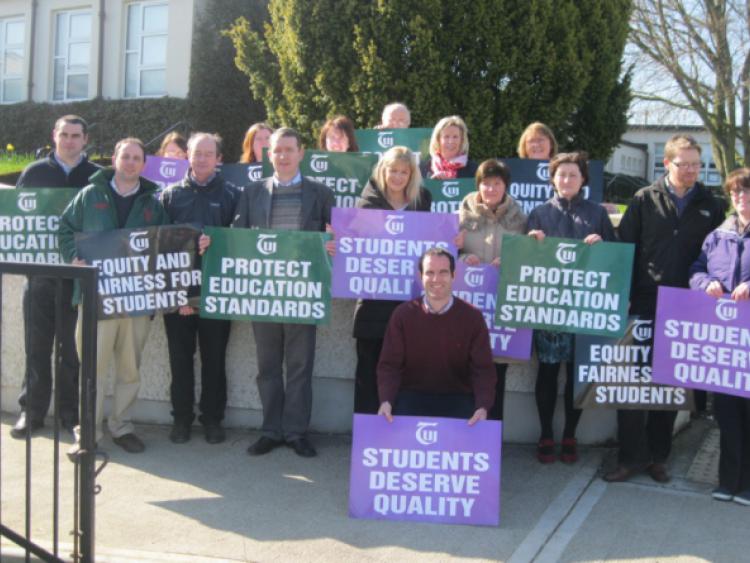 Secondary school teachers from all over Laois staged a lunchtime demonstration last week against the new Junior Certificate reform.

Secondary school teachers from all over Laois staged a lunchtime demonstration last week against the new Junior Certificate reform.

Members from both the ASTI and TUI unions were protesting as part of a national protest, and both unions are currently balloting members for industrial action.

“This will be open to people feeling under pressure, especially in rural areas where everyone knows each other,” she said.

Ms Higgins said that as well as the extra workload on teachers, students will also be faced with extra work.

“There is a lack of resources for the reform. The new English reform will be starting this September for first years and there has been one inservice day provided for English teachers.

“As far as I know subjects will be phased in. The Department is not prepared to train teachers properly,” she said.

Ms Higgins also expressed concern about how this would affect students as they move through school.

“Without completing Junior Certificate exams, students will not be prepared going into their Leaving Certificate. They won’t have the experience of an exam environment.”

She said that she expects to see a very high ‘yes’ from the ballot on industrial action.

“The other difficulty is that the Minister is reluctant to negotiate. He will consult but wants no negotiation. If industrial action goes ahead, this will mean non co-operation with any aspect of the new Junior Certificate.”

It is expected that the ballot results from both unions will be available over the next few weeks. If a ‘yes’ vote is successful, teachers from schools across the county will engage in industrial action.