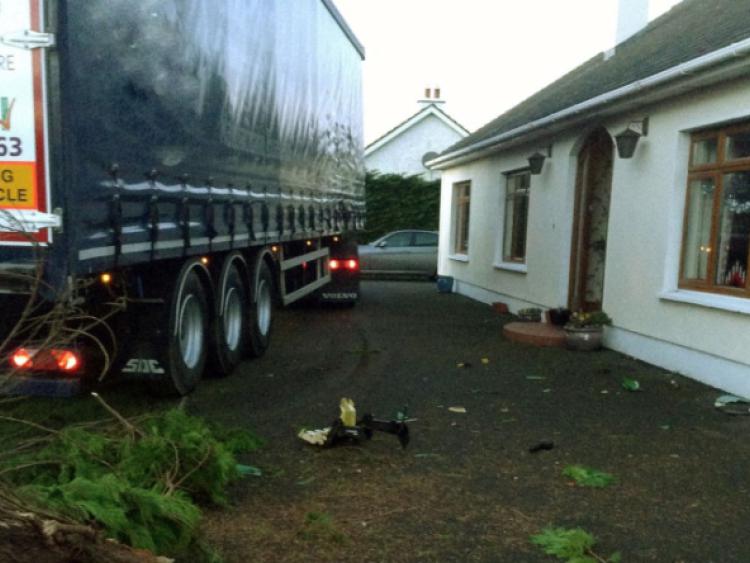 Laois County Council are to consider an immediate speed reduction at Kilmullen in Portarlington, after residents made an emotional plea.

Laois County Council are to consider an immediate speed reduction at Kilmullen in Portarlington, after residents made an emotional plea.

Three residents on the busy R420 road, where an artic lorry smashed into a garden recently, came to the Emo area meeting and told staff that if a tragedy occurred, “blood would be on your hands”.

Rosaleen O’Kane held back tears as she recalled arriving home on December 28 with her two young daughters, to see emergency vehicles and flashing blue lights at her gate.

A 40 foot lorry had smashed through trees and a concrete fence, careering to a halt just feet from the house.

“It is just luck that my husband and son were not in the garden. They were going out to put up a fence and my husband decided to light the fire first. When I saw where the lorry was, and I saw the guards, I thought my husband was dead. It was the worst shock of my life,” she said.

The residents are demanding that the speed limit be cut from 80km to 60km, to resurface the road, install flashing warning signs and a crash barrier outside their homes.

“We no longer feel safe. I have been out to numerous accidents on our road, each time I wonder if the driver is alive or dead,” said Ms O’Kane, a nurse.

Neighbour Paula Campbell said there were 20 accidents in the last 18 months.

“On average there are 4,000 vehicles using it each day, and 22 percent of those are lorries. We want the directions for Tullamore removed at junction 14 on the motorway. They should not be using our road with the bad bends and number of accidents,” she said.

Ms Campbell said a senior council official told residents in a meeting last summer that “it would take a corpse for Laois County Council to spend money on that road”.

“We pay road tax and property tax and we were told it would take a corpse to get any help. How would any of you feel if you were told that this is the only option to fix your road where you and your loved ones live? We want meaningful action before someone is killed,” she said.

Senior Council planner Angela McEvoy told them it would be examined by engineers, with a progress report for the next meeting in July.

Acting senior engineer Stan Cullen said that in the interim, the council “can apply for a roadworks speed limit, under the guise of doing roadworks”.

He said this could be installed in three to four weeks.

“I can put up a cautionary speed limit, set up to look like roadworks, as a holding position,” he added.