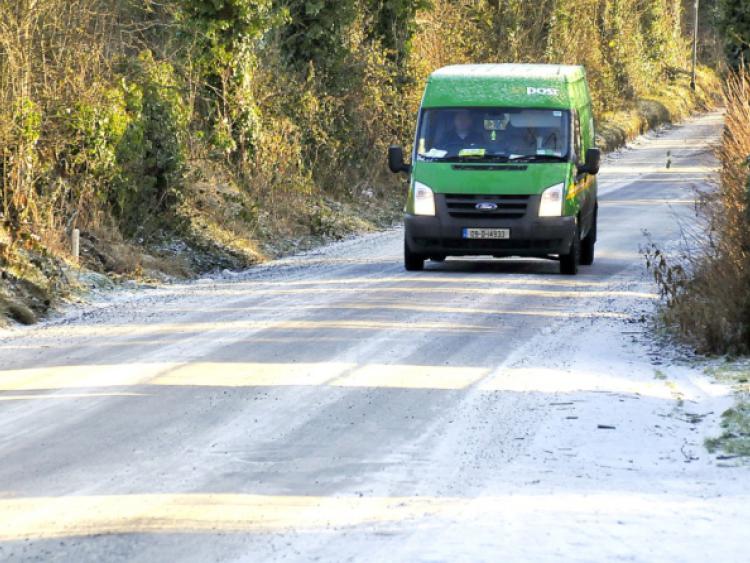 Laois County Council are to consider paying farmers to use their tractors to spread salt on local roads, requested by Cllr Brendan Phelan.

Laois County Council are to consider paying farmers to use their tractors to spread salt on local roads, requested by Cllr Brendan Phelan.

“There are farmers prepared to do it very reasonably, to go out in the early morning for an hour and be paid,” he said at a meeting of Borris-in-Ossory Mountmellick district.

A recent accident had “three or four cars off the road” at a motorway flyover.

“There have been many accidents in Lisduff. a woman was killed when she skidded and drowned in the dyke. It is deadly, the bridge is exposed,” he said.

“We will see if it is feasible to use private people, but there could be insurance issues,” she warned.

“They are not salted at all, and there is a playschool in Lisduff. Portlaoise is fully salted from one end of the town to the other. It is shameful Rathdowney is forgotten,” he said.

Cllr Seamus McDonald asked if extra roads could be salted, as stocks had been used so little yet this winter.

“It’s the same in Clonaslee, to the county boundary,” he said, with his request supported by Cllr Paddy Bracken.

The council have enough salt to cover 19 nights of frost, according to Raymond James from the roads section.

“We are topping up our stock so by Christmas the barn will be full, with 750 tonnes. The routes are similar to last year,” he said.

Five lorries cover five rural routes. Two pick-ups cover Portlaoise and Mountmellick. but Portarlington continues to rely on one of the rural lorries. Many local roads are left unsalted, with the public advised to use main roads in icy weather and drive slowly.

Salt heaps will be left for the public to collect at depots in Portlaoise, Mountmellick, Abbeyleix, Graiguecullen and Portarlington.

The council budgeted €233,000 this year on winter maintenance, but Director Kieran Kehoe said they will pay to keep the routes salted “even if we are out every night”.