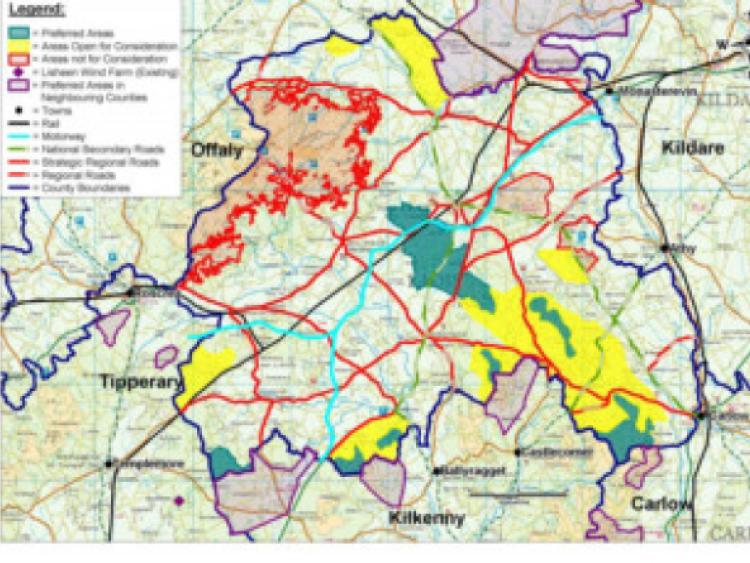 County councillors are trying to wipe out every area designated as suitable for windfarms from Laois’ development plan, to put a spoke in wind farm development.

County councillors are trying to wipe out every area designated as suitable for windfarms from Laois’ development plan, to put a spoke in wind farm development.

Going against the advice of Director of Services Anne Marie Delaney, a motion was passed unopposed, to “request the county manager to commence the process of a variation of the County Development Plan 2012-2018 ... for the purpose of removing the areas designated as suitable for wind energy development”.

There were loud claps from a public gallery filled with anti-turbine campaigners, many from Cullenagh, south of Portlaoise, where Coillte have been granted permission to build a controversial 18 turbine windfarm.

It is an about turn for some councillors who in 2011, approved the five year county development plan which allowed for turbines over 100 metres tall, at a distance of 250 metres from houses.

However the motion could be deemed illegal, as it goes against government policy.

Ms Delaney had asked the councillors to wait until government guidelines are published later this year, after which Laois guidelines could be updated.

“The notice of motion is not in compliance. A blanket ban doesn’t comply with government policy. We will get a ministerial direction if it is passed,” she warned.

Asked by Cllr Padraig Fleming if removing the purpose would make the motion legal, she said a reason had to be given for the motion.

“We shouldn’t look for advice from Anne Marie, she doesn’t agree with what you are doing,” said Cllr Willie Aird.

“Are we going too far, looking for a blanket ban?” suggested Cllr John Moran.

“There’s no point in giving any area for An Bord Pleanála to approve,” said Cllr Paschal McEvoy.

Six councillors proposed the motion, including Cllr Fleming who supported the wind strategy in 2011.

“When this was originally done, turbines were a certain size and there were no major issues, but what has been proposed for Laois is phenomonal. Developers have doubled the size to almost 600 feet high. It is absolutely criminal that An Bord Pleanála could pass Cullenagh, for one simple reason, it is built around houses,” he said.

“No one envisaged the size and scale, we should now look to have a blank canvas. It’s in the remit of councillors to do that. Imagine emigrants coming back in ten years, we could end up destroying Laois,” she said.

Noel Tuohy warned his Portlaoise constituents they would also “pay a price” for windfarms, and asked organisations “not to accept bribes” from developers.

The lands designated as suitable take in the windfarm site in Cullenagh. They also stretch from cutaway bog near Portlaoise, south east to the Carlow Kilkenny border, and from Mountmellick to Killeigh, and from Durrow west through Cullahill.

There is no land zoned as ideal or “strategic” in Laois or in any lands adjacent to Laois.