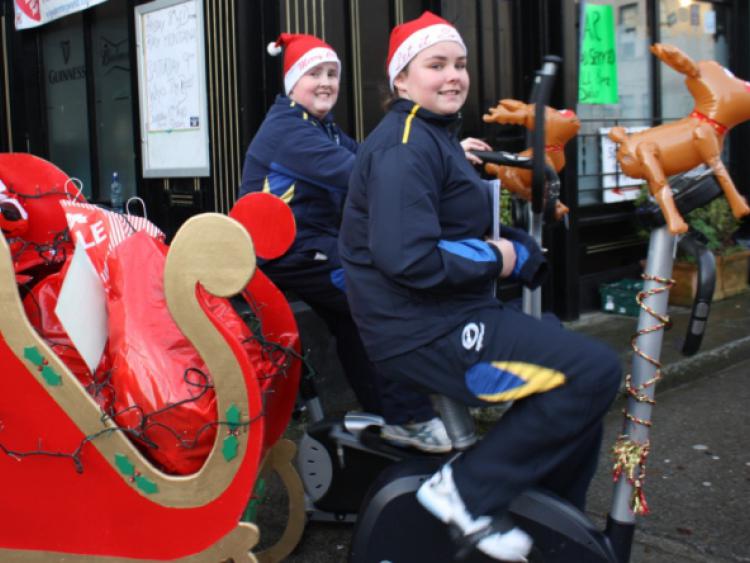 Staff and students of Mountmellick Community School got out on the street last December 9 and spent the day doing a charity Santa Cycle, generating sack loads of Christmas cheer despite the rain.

Staff and students of Mountmellick Community School got out on the street last December 9 and spent the day doing a charity Santa Cycle, generating sack loads of Christmas cheer despite the rain.

The Santa Cycle was an idea dreamed up by the green schools committee members, in their efforts to gain their fourth green flag, for travel, by promoting environmentally friendly ways of getting to school and work.

“This idea then grew rapidly as other students bodies were eager to get on board so student council, meitheal and prefects joined in with the great idea to use this opportunity to raise money for the Ben and Jake Connolly Trust,” said teacher Edel Leonard from the school.

On the day a bucket collection took place for the charity for the two local boys who are seriously ill, while the students cycled on exercise bikes and used a cross trainer to “fly” a sleigh.

They were motivated and encouraged by all the student bodies and a very enthusiastic school choir, to the delight of shoppers.

The green schools committee handed out pages with possible new years resolutions to passers by, which included ideas on carpooling, cycling, park and stride, and simply walking.

Ms Leonard thanked all for the students their hard work and enthusiasm.

“Sincere thanks to all involved. It was heartwarming to see staff and students work so well together, the more it rained the louder they sang! The true spirit of Christmas was present and a beautiful warm atmosphere was generated,” she said.

Mountmellick Community School would also like to thank the public for their generosity, compliments and encouragement on the day and especially to Frankie Horan of Frankies Hairdressing for the use of Santas sleigh and to The Mellick Inn for the lights.

The trust was set up to raise money to build a wheelchair accessible house for the young Mountmellick boys, who have a rare condition called Allan Herndon Dudley Syndrome.