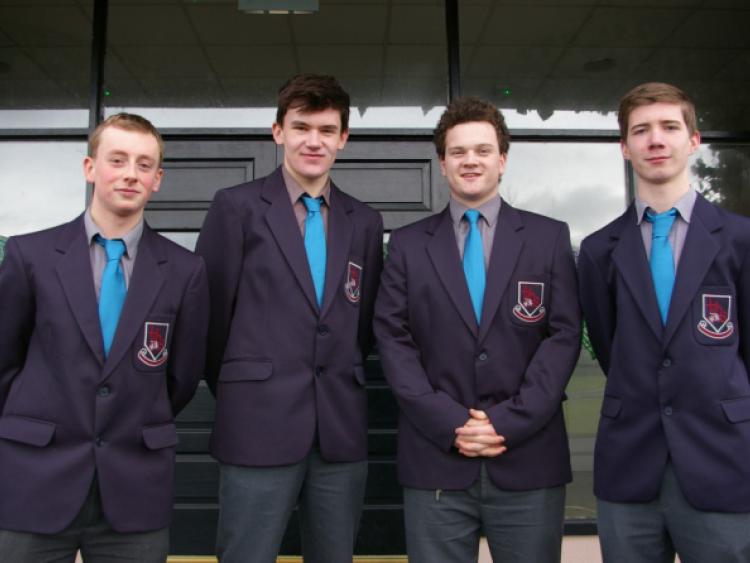 Four students at Heywood Community School have won their way to the 2015 National Conference of the European Youth Parliament (EYP), one of them using rap to win his debate.

Four students at Heywood Community School have won their way to the 2015 National Conference of the European Youth Parliament (EYP), one of them using rap to win his debate.

John Oxley and Jack O`Hara, both from Abbeyleix, Diarmuid McGowan from Ballyroan and Daniel Burke, Ballyouskill will represent their school at what is the largest platform for political debate amongst teenagers in Europe.

The four won their place at the Leinster regional session of EYP Ireland in Athlone last month.

It was Jack’s second year attending the regional final.

“The aspect that I loved most was the teambuilding on the first day. It was of great benefit when we discussed problems that are facing the EU,” he said.

“Our innovative resolution was a ‘Youth Employment Drive’, a scheme to give graduates a year’s paid internship in their field of study. The EU would top up their social welfare payment to the level of a living wage. Our resolution was passed at the General Assembly. Perhaps it helped that I performed it as a rap,” he said.

The regional session had events ranging from teambuilding and debates to social activities.

“There was a lighter side, we dressed up in recycled items and were expected to compose a group chant and a visual display of what we had learned,” said John, whose main debating job was to sum up the arguments.

“We learned how the EU committee system works, how to compose a resolution and the difficulties in getting one passed. After much debate, we came up with eight agreed resolutions which we then proposed at the General Assembly,” he said.

Diarmuid said the regional was “one of the best experiences of my life”.

“I was on the committee on Culture and Education. Our motion was ‘Should Europe have a common curriculum at second level?’. Whilst it didn’t pass in the General Assembly, the experience of working with other people was fantastic,” Diarmuid said.

Daniel Burke is now thinking of a political career.

“I’ve always had an interest, and the European Youth Parliament has reaffirmed my desire to pursue political studies and possibly a career in politics,” he said.

He was on the committee on Constitutional Affairs.

They are preparing for the National Conference in March, themed “Tomorrow’s Europe, Today”.

“Hopefully we will make as big an impression as we did at the Leinster regional session. Europe here we come,” he said.