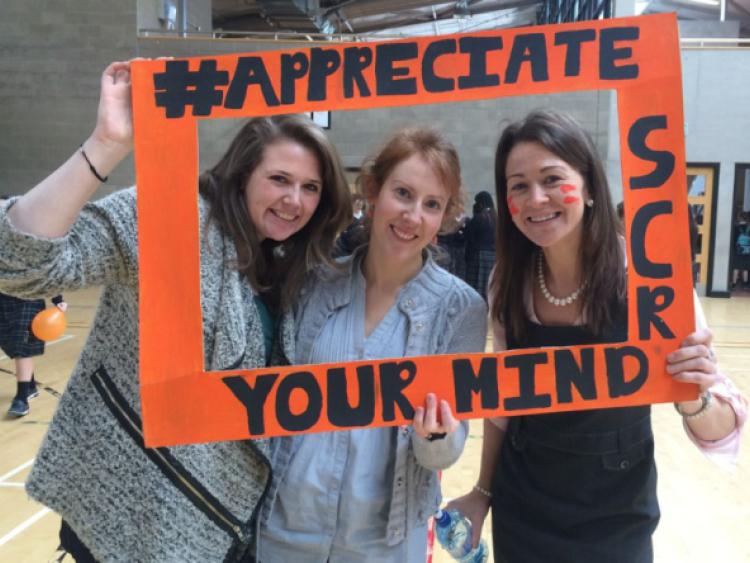 The week was held in April to raise awareness and promote good mental health among both students and staff at the Portlaoise girls school.

The student committee are working towards gaining the first Amber Flag for the school.

They packed plenty into the week, held in the run-up to the school’s co-hosting the Cycle Against Suicide Laois stopover last Friday May 8.

Students were met at the start of the week with amber balloons, music and positive banners in school.

A ‘Hope’ tree in the GPA was decorated with positive quotes. The ‘Smile Wall’ gave students and staff the opportunity of posing for photos inside giant amber photo frames.

The week had something for everyone. First and Second years attended a Humourfit show on bullying. TYs, Fifth and Sixth Years enjoyed a talk on Positive Mental Health by comedian Rob Carley, inspired by his mantra “You are lovely; you are lovable and you are loved”.

The Amber Flag committee and TYs sold wristbands and held a cake sale for Amber Flag and Cycle Against Suicide, and handed out information on good mental health.

Fr Paddy Byrne also spoke about his experiences in school and in life.

First years made a Daisy Chain Compliment collage. Second years made and swopped pretty Mental Health Awareness bracelets. Third years practiced Random Acts of Kindness. TYs made a Gratitude wall. Sixth years made a collage of ‘what de-stresses me’, while fifth years focused on the symbol of a battery, with messages on the positive end outnumbering those on the negative. TYs also stuck surprise inspirational ‘post-its’ to Sixth year lockers.

For Amber Day on Friday, all contributed €2 for Cycle Against Suicide and Amber Flag, and wore orange clothes. First prize for best dressed went to Mercy Agha.

“The aim of the week was to raise awareness about mental health and to lighten the mood in the run-up to the state exams. We hope everyone enjoyed it, and the Cycle Against Suicide event. There was a great atmosphere of positive wellbeing throughout the school, reminding us to count our blessings, not our problems,” she said, thanking all the staff for their support.